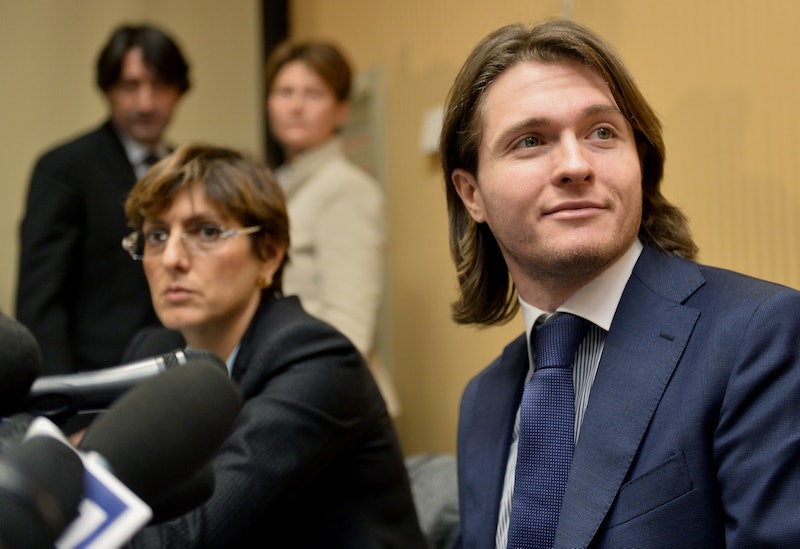 We all remember the saga of Amanda Knox: the American student was famously arrested and convicted of murdering her study abroad roommate, Meredith Kercher, while in Italy in 2007, before ultimately being exonerated. Now, almost a decade later — after Knox spent four years in jail before being released on appeal and eventually acquitted of the charges — Knox's story is coming to Netflix in a new documentary set for release on Sept. 30. The doc comes after multiple investigations, news segments, and even a few original films and television shows about Knox's role in the case, but while she has become somewhat of a celebrity due to the events, her boyfriend at the time of the murder, who was accused of the crime alongside Knox, is a bit less talked about. With the documentary's release, though, he'll soon be on everyone's minds. So just where is Raffaele Sollecito now, all these years after the '07 events?

Sollecito was originally found guilty of killing Kercher along with Knox but, like Knox, he maintained his innocence and filed an appeal. The duo eventually had their convictions overturned in 2011, resulting in their release from prison. However, they wouldn't be officially cleared of the murder until March of 2015, when the Italian Supreme Court of Cassation fully exonerated the pair, noting many errors in the investigation and previous trials. Now that both Sollecito and Knox are free, they have gone their separate ways. Knox returned to her family in the U.S. and Sollecito re-established his own life in Italy, and the two reportedly don't speak. "I want to be detached from this bond," Sollecito told NBC after his 2015 acquittal, referring to Knox.

Since then, Sollecito, now 31, has found himself in the press multiple times. After co-writing a book about his ordeal, Honor Bound: My Journey to Hell and Back with Amanda Knox, in 2013, he was reported by The Daily Mail to be in the process of writing a second book, though that has yet to be released. Outside of writing, Sollecito is also a budding entrepreneur. In early 2016, he defended his new business venture, a social media for the dead called Memories, against those who deemed it too "morbid," according to The Guardian . The service would allow people to create profiles of their dead loved ones and order flowers to be delivered to their grave.

Strange business ideas aside, Sollecito recently started a brand new career as a TV expert on crimes for Italy's Tgcom24. "I have been a victim of a miscarriage of justice, I know the faults of the justice system, what happens in a jail and what happens when the media twists the truth," Sollecito told the UK's The Times (via NBC News) of why he took his new job. "The usual experts on these shows have seen these things through a window — I have lived them."

If you're curious to hear more from Sollecito about his conviction, time in jail, and what he's been doing since his release, you're in luck. He participated in the new documentary, allowing another glimpse into his mindset and actions both at the time of Kercher's murder and now.

More like this
Where Is Armie Hammer’s Ex-Wife Elizabeth Chambers Now After 'House Of Hammer'?
By Grace Wehniainen and Radhika Menon
Here’s What 'Sister Wives’ Star Christine Brown Has Been Up To Since Leaving Kody
By Grace Wehniainen
Where Is The Bling Ring’s Rachel Lee Now?
By Arya Roshanian
What Is 'Pretty Wild' Star Tess Taylor Up To Now?
By Morgan Leigh Davies
Get Even More From Bustle — Sign Up For The Newsletter