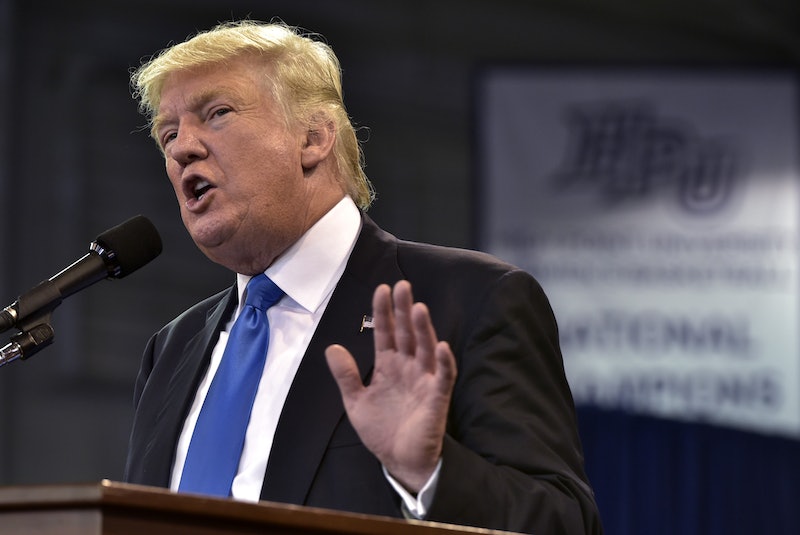 So, did you hear all that nonsense about Donald Trump Jr. and Skittles? If not, congratulations, because you might just be the luckiest person in America. Its gotten very tough to consume and digest the almost endless buffet of controversies, inflammatory accusations, and dehumanizing rhetoric that's rolled out of the Trump campaign, to say nothing of Trump himself, but his eldest son got in on the act this week, comparing Syrian refugees to poisoned Skittles. This ultimately gave rise to the "Trump A Candy" Twitter hashtag, which did a pretty good job describing any number of things that are oh so wrong about the real estate magnate and his presidential candidacy.

In case you missed it, here's what Donald Trump Jr. actually tweeted out that started the whole fracas — a picture of a bowl of Skittles, and an accompanying message suggesting that allowing refugees to enter the United States would be like eating a bowl of Skittles while knowing a few were poisoned. You get the point.

The tweet stoked a tremendous amount of outcry online from progressives, anti-Trump people, and those who're sympathetic to the plights of the more than 4 million Syrian refugees now cast out in the world without a place to call home. And plenty of those same people were more than willing to roast Trump Jr. and Trump himself for it — case in point, #TrumpACandy.

For the record, a spokesperson for Skittles actually responded to Trump Jr.'s controversial tweet, and the response was everything a humanitarian sweets-lover could've hoped for — when Hollywood Reporter senior writer Seth Abramovitch asked the candy brand (which is owned by Wrigley) for comment, VP of corporate affairs Denise Young replied with a statement that pretty much covered all the bases.

Skittles are candy. Refugees are people. We don't feel it's an appropriate analogy. We will respectfully refrain from further commentary as anything we say could be misinterpreted as marketing.

Hopefully, Trump Jr. and his father's campaign have learned a lesson about the folly and cruelty of comparing millions of suffering and displaced people to a bowl of tainted candy. And if not that, at least a lesson about just how many antagonistic candy-themed memes the internet can crank out in a short period of time. You shouldn't expect any kind of official backtrack on the remark, however — in a move that could hardly be characterized as "presidential," Trump's campaign has released a statement unapologetically defending the Skittles analogy.