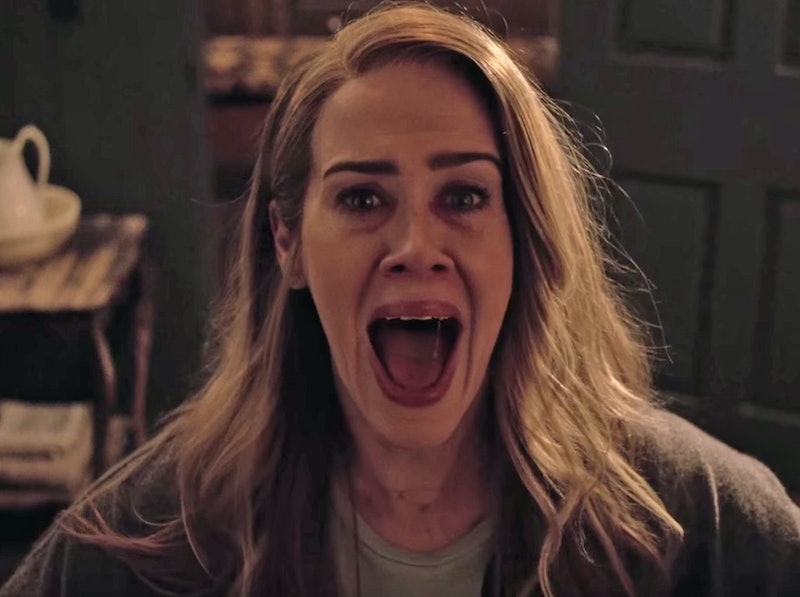 Murder House's Rubber Man, Asylum's Bloody Face, Coven's Minotaur, Freak Show's Twisty the Clown, Hotel's Addiction Demon… Every season of American Horror Story has had its own flagship monster that became something of a symbol for that iteration of the popular anthology series. Season 6 wasted no time in introducing viewers to the latest in the show's long parade of menacing disfigured creatures: something the fans have dubbed "Pigman," first heard squealing in the woods outside Shelby and Matt's house and later seen in an ominous videotape in their basement. But it turns out we may have already seen this particular monster before. Is Roanoke 's Pigman the same monster as Murder House's Piggy Man?

We first learned of the Piggy Man in the sixth episode of the show's inaugural season, in an episode appropriately titled "Piggy Piggy." Modern Family's Eric Stonestreet guest starred in the hour as Derrick, a patient of Ben Harmon's who came to the therapist with a very specific phobia: a fear of an urban legend that described how if you stared into a mirror and chanted "Here piggy, pig, pig" three times, it would summon a man with the head of a pig who would subsequently murder and dismember you. Nasty stuff.

With Ryan Murphy's continued insistence that the disparate seasons of American Horror Story will start connecting in more and more overt ways, it's not unreasonable to assume that these two sow-headed creatures are in fact one and the same.

And there are other indications that lend credence to this theory, too. "Piggy Piggy" is the same episode that introduced viewers to Billie Dean Howard, the medium played by Sarah Paulson in Murder House (and who would later reprise that role in last season's Hotel). Of course, Billie Dean was the one who told Jessica Lange's Constance the story of the Lost Colony, which is thus far Murder House 's most direct tie to Roanoke .

However, as enticing as this theory is, there's one major problem: Piggy Man already has a backstory, and it doesn't have anything to do with the Lost Colony. Here's the myth, according to Derrick, the monster was formerly a hog butcher who worked in Chicago during the World's Fair of 1893. When he would go among his prey to select his kill, he would don a mask made out of a dead pig and snort so they would think he was one of them. But one day he slipped and fell and the angry hogs devoured him. His ghost apparently then returned, pig mask and all, to terrorize the citizens of Chicago; he would kill his former customers and then butcher them like one of his hogs.

There's obviously not much about this fictional urban legend that has to do with Roanoke. It happened in Illinois, not North Carolina; it took place in the 19th century, not the 1500s; it involved a single dead butcher, not a whole group of missing colonists. So either the connection between Murder House's Piggy Man and Roanoke's Pigman is purely coincidental… or it will prove to be subtle and surprising in a way that won't be revealed until we learn more about Pigman's true identity later this season.