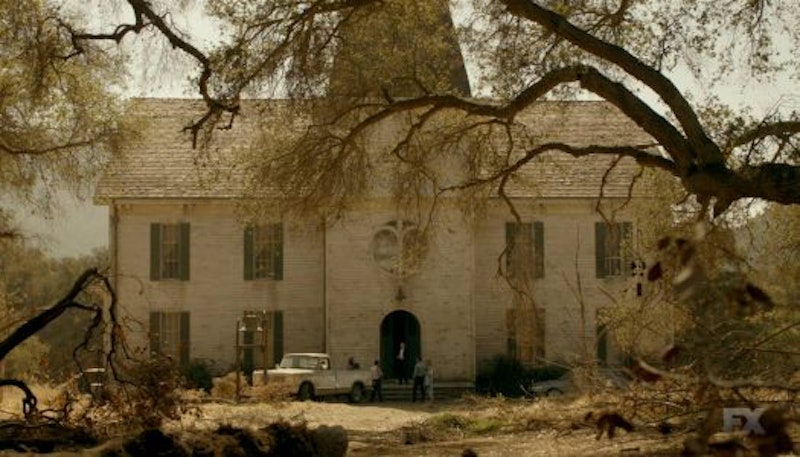 So, fans still really have no idea what is actually going on in American Horror Story Season 6. The premiere featured a documentary-style episode revolving around Shelby and Matt, a couple who move into a haunted house in Roanoke, North Carolina. The format has the couple speaking in interviews, while other actors portray their story in a dramatic reenactment. This is clearly a very different formula from any other season of the show, but that doesn't mean it hasn't already included some connections to previous seasons. The house from AHS: Roanoke connects to past seasons in numerous ways.

Again, keep in mind that the season has just begun. Fans have an entire series full of insanity ahead, and the entire format could even switch itself up at some point. But, for now, Shelby and Matt will be contending with this peculiar house for the time being. You know, the one they kind of bullied away from a group of super unfriendly hill-people who also wanted to buy it. I'm sure that won't be a continuous problem. Also, they definitely should have let the other people buy the house because it has some serious issues.

Anyway, here are some of the immediate connections to past seasons.

1. The First Shot Of The House

Fans didn't have to wait long for some deja vu. Ryan Murphy made sure to include some seriously obvious references to at least one other season of American Horror Story right off the bat. Hellogiggles first reported that the way in which the Roanoke house was introduced was almost identical to the introduction in Murder House . The camera pans through trees and then opens up to reveal the home in both seasons. I took a look back at the Asylum house intro as well and it also has the trees/house element. Sure, that could be a coincidence. But does American Horror Story really pride itself on coincidences? I'm willing to bet that connection was on purpose.

It's worth noting that Season 6 seems to have broken away from the pattern of every other season being initially set in present day. Last season's American Horror Story: Hotel was set in present day Los Angeles but there were countless elements and characters from the past living in the present day world and that same idea goes for Murder House and Coven. Since the end of the Season 6 premiere showed Shelby stumbling upon a group of people who appeared to be from the lost colony of Roanoke (or a super convincing and committed group of cosplayers), perhaps we will have the same kind of vibe with characters from the past intruding on to present day.

Either Murphy just has a deep affinity for the look of a spiral staircase leading to a skylight or that particular camera shot is on purpose. But, again, Murphy is not in the business of throwing extraneous camera shots in the mix, so it's probably safe to assume that he purposely uses it as a common thread. The spiral staircase photo is seen in Murder House, Asylum, Freak Show, and now Roanoke. In Murder House it was the scene of Ben Harmon's murder, in Asylum it was where Sister Mary Eunice was thrown to her death, and, in Freak Show, it was shown before Dandy's mom took a blood bath. In the first episode of Season 6, that staircase was where Shelby and Matt's sister found all of the creepy, Blair Witch-type stick figures hanging.

4. We May Have Already Come Full Circle

If you take a look at the locations for every season, it looks like we may have come full circle. Murder House had the main characters moving from Massachusetts to Los Angeles, Asylum in Massachusetts, Coven was in New Orleans, Freak Show was in Florida, Hotel was in Los Angeles, and, now, Roanoke began in LA and then moved to North Carolina. If you take it down to simple directions, it is:

That's a pattern, friends. Basically, there is already ample evidence to suggest that this season is connected to the others. I am thinking we are in for a lot more connections as the season progresses. Stay tuned.