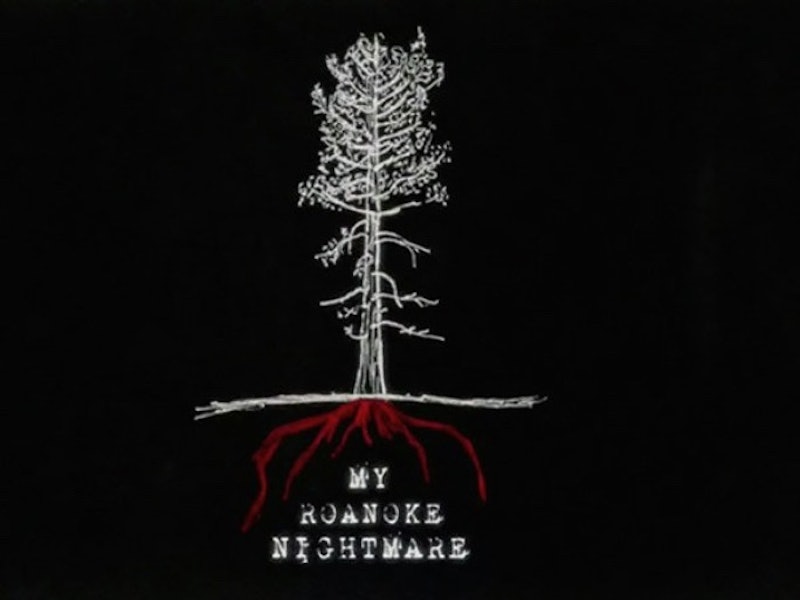 It's been an entire week since the Season 6 theme was revealed to be American Horror Story: Roanoke and yet the mystery behind this latest Ryan Murphy installment feels more ominous than ever. Who or what is tormenting Matt and Shelby at that farmhouse and why? Where is this all leading? When it comes to this series, nothing is ever as straightforward as it seems, which is why many viewers have taken it upon themselves to concoct some pretty interesting theories about American Horror Story Season 6 that are actually so good it's kinda scary.

Now, that's not to say that every theory out there is true. In fact, that's most likely not the case. But some of these concepts are really interesting to think about and could be total game changers as to where the season could be headed. Because even amid all of this chaos, we're bound to be heading somewhere with all of this, right? So if you still find yourself scratching your head over the mystery that is AHS: Roanoke, check out this roundup of theories below and see if you agree with any of them. It'll change not only the way you look at the premiere, but the rest of the season in general.

The Reenactment Isn't What We Think

In My Roanoke Nightmare, Lily Rabe and Andre Holland are portrayed as the "real" Shelby and Matt Miller who are retelling the horrific events from their past, while Sarah Paulson and Cuba Gooding Jr. are supposed to represent the docu-series versions of the characters. But what if the roles are actually the exact opposite of what we think and Paulson and Gooding Jr. are the real Shelby and Matt instead? It makes sense, considering the two of them are noticeably older than Rabe and Holland. After all, shouldn't the reenactment versions be younger than their real-life counterparts? Just saying!

Back in 1969, one of Charles Manson's most loyal followers, Susan Atkins, murdered Hollywood actress Sharon Tate (who was pregnant at the time) by stabbing her to death. And just incase that wasn't horrific enough, according to the LA Times, Atkins also used Tate's blood to write "PIG" on the front door before leaving the scene of the crime. Is it just a coincidence that the new Big Bad of the season just so happens to be a pig-headed figure or could there be an unknown connection here that has yet to unfold?

We've Heard Of This Pig Creature Before

Remember back in Murder House when Modern Family's Eric Stonestreet played Derek, a patient of Ben Harmon's who was terrified of the urban legend known as the "Piggy Man?" Basically, if you called out to this Pig Man by saying the right incantation into a mirror, he would appear and murder you. (Think Bloody Mary with a farm-like twist.) Maybe this Piggy Man and the Roanoke creature are one in the same.

Billie Dean Howard Is Behind The Documentary

Reddit user mansonfamily points out that My Roanoke Nightmare could be the creation of Murder House 's very own Billie Dean Howard, given that her appearance in Hotel centered around the medium interviewing those who've had close contact with ghosts for her TV show. Perhaps this docu-series is part of her latest project.

If You Die On The Farmhouse Grounds, You Can Never Leave

It's completely possible that the Roanoke farmhouse will mirror Murder House in multiple ways — one of which includes the rule that those who die within the confines of the property will become a ghost, doomed to be trapped there for all eternity. Could that be why Kathy Bates is so angry and protective of the place?

The Time Period Is During The O.J. Simpson Trial

As Hellogiggles astutely noticed during the premiere, Matt was at one point watching a news report on the television, which showed the police chasing what appears to be a white Bronco — almost eerily like the one Simpson famously made a break for in back in 1994. This may have been Murphy's way of either a.) making a nod to The People v O.J. Simpson: American Crime Story (which Cuba Gooding Jr. starred in) or b.) hinting at the time period this was all taking place in. Either way, it's pretty interesting!

It's hard to say whether any of these theories will pan out by the end, but it's definitely fun to think about nonetheless.