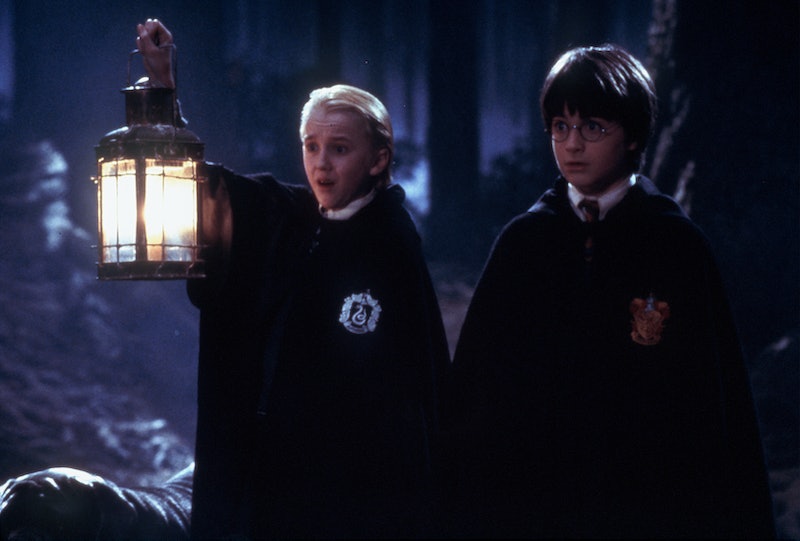 Um, LE GASP, everyone. You know how when you were an adorable emo teen and you dressed all in black for the first time and walked down the stairs and just dared your parents to say something? Pottermore may have just pulled the same shenanigan on the official Pottermore Twitter, which just switched to black and forest themes with no explanation to fans whatsoever. And as we know, nothing random happens in the land of Harry Potter without it meaning Something Awesome This Way Comes. Gather round the Gubraithian fire, fellow conspiracy theorists, because we've got our work cut out for us today.

Here's the sitch with the redesign they dropped: the Pottermore icon is completely black, and the header looks at first glance like it is, too. But if you turn your screen brightness up and make sure you're looking at it from the optimum angle, it actually reveals that the header image is awash with dark greens, purples, and blues — a little bit (OK, a lot a bit) like the Forbidden Forest. But what exactly are they saying in all the things that they're not saying? Crucio my heart, Pottermore, you can't just leave a girl hanging like this!

And here is Exhibit B — the picture of the forest that they ominously tweeted.

But what does it mean??? Here are a few solid theories as to what Queen Rowling is rolling out next.

The Patronus Test Is Finally Coming To Pottermore

Back in September 2015, internet rumors about a possible Patronus Test on Pottermore found a home on Reddit. While it hasn't been confirmed by Pottermore officially, it would be a sweet addition to the Pottermore experience, which already allows you to find out your Hogwarts House, your Ilvermorny House, and the make of your wand. And what better place to test your skills with a Patronus than one of the scariest places it Potter lore? Start fishing through your memories to find the super awesome one you're gonna harness for your Patronus, just in case!

J.K. Rowling Is Using It As A Platform For Lumos

This past Saturday, Rowling hosted a live talk about We Are Lumos Worldwide, a new campaign of her international charity, Lumos, which serves to help children leave orphanages and return to their families. Could this perhaps be another angle to raise awareness? Lumos is, after all, the spell that lights up the dark; nothing like a little ~darkness~ on Twitter to remind people how much we need light.

Some Exciting Fantastic Beasts Swag Is Coming Our Way

Are we getting an early released scene? Some more backstory about Newt Scamander & Co? Maybe even an interactive experience based around the movie? With a November 18 release date, right now would be the perfect time to get Potterheads revved up before we let our nerd flags fly this Thanksgiving — and no place has as many mysterious beasts as the Forbidden Forest, y'all.

Of course, all of this is just conjecture, because unfortunately I am not BFFs with J.K. Rowling (yet) and I can't actually predict the Potter future (YET). Whatever is happening, though, is obviously a cause for excitement. Wands out, eyes up, CAN'T LOSE.

More like this
Harry Potter's Viktor Krum Has Undergone A Huge Transformation Since Hogwarts
By Sam Ramsden and Meguire Hennes
Nicola Coughlan Shared A Lady Whistledown Excerpt From ‘Bridgerton’ Season 3
By Grace Wehniainen, Alyssa Lapid and Sam Ramsden
Viserys’ Fate On 'House Of The Dragon' Could Differ From The Book In This Surprising Way
By Grace Wehniainen
Read The First Pages Of Emma Rosenblum’s Highly Anticipated Debut, 'Bad Summer People'
By Samantha Leach
Get Even More From Bustle — Sign Up For The Newsletter