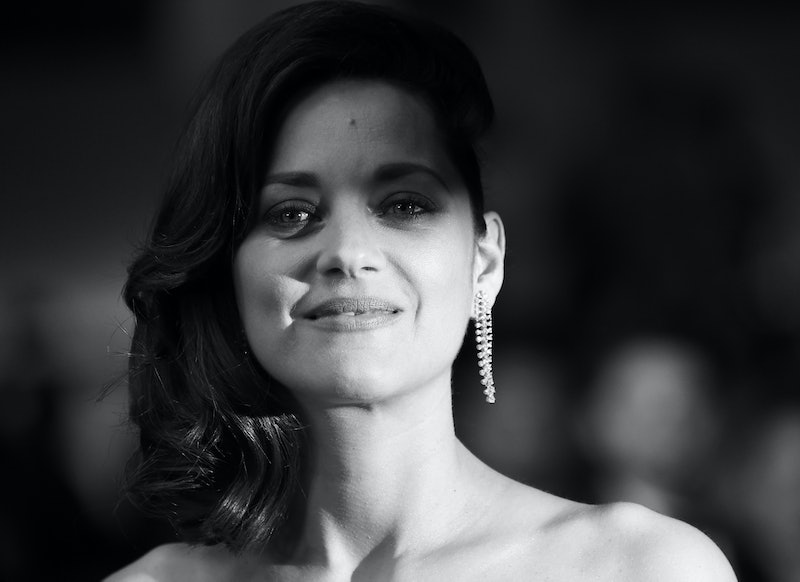 After more than 24 hours of speculation and rumor surrounding the claims that she was the alleged reason for Brangelina's split heard 'round the world, Marion Cotillard responded to the Brad Pitt cheating rumors, and laid her involvement to rest while confirming her rumored pregnancy. In her statement, she says that she will only put forth one statement and makes it clear that she has nothing to do with the divorce between Pitt and activist, director, and actor Angelina Jolie. The rumors gained traction when reports surfaced that Cotillard is pregnant with her second child, with many speculating that Pitt could be the father. In her statement, the actress makes clear that her partner, Guillaume Canet (with whom she has a 5-year-old son), is the father of her child. What's most striking, however, is how much pain these rumors have clearly caused her.

"This is going to be my first and only reaction to the whirlwind news that broke 24 hours ago and that I was swept up into. I am not used to commenting on things like this nor taking them seriously but as this situation is spiraling and affecting people I love, I have to speak up," she wrote. Cotillard goes on to call Canet "the man of my life, father of our son and of the baby we are expecting." She ends her statement by wishing haters "a swift recovery" (grade A sleight, if you ask me) and states that "I do very much wish that Angelina and Brad, both of whom I deeply respect, will find peace in this very tumultuous moment."

For someone who's probably had a really rough week, this is an incredibly thoughtful response.

For his part, Pitt has not responded directly to any rumors of cheating, but released the following statement regarding his divorce: "I am very saddened by this, but what matters most now is the well being of our kids. I kindly ask the press to give them the space they deserve during this challenging time."

Jolie has also refrained from commenting any the rumors surrounding the cause of the divorce, only speaking through her lawyer, Robert Offer: "This decision was made for the health of the family. She will not be commenting, and asks that the family be given its privacy at this time."

While it's understandable that the world was moved by the rupture of one of its golden couples, it is unfortunate that Cotillard was caught up in the tumult. Here's hoping that she and her partner have nothing but happiness ahead as they welcome their second child into the world.