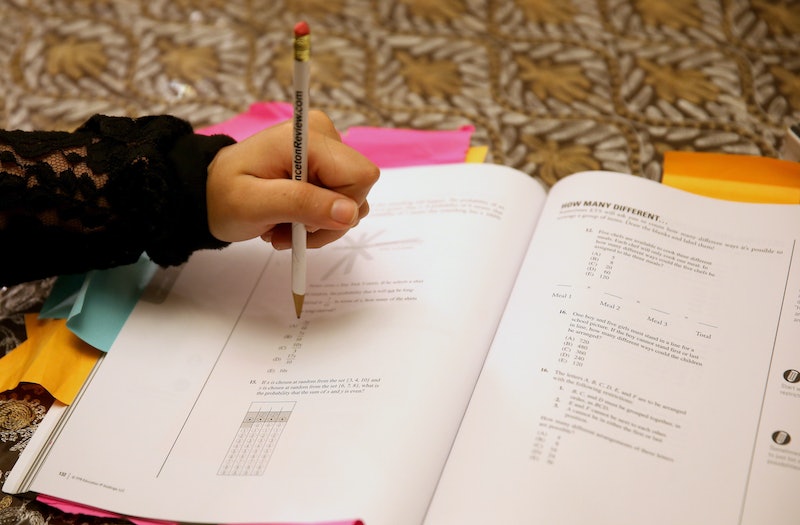 You may have dreaded taking your college placement exams. You may have hired tutors and pulled all nighters and cursed the College Board gods. But did you consider hiring someone to take the SAT or ACT for you? Probably not. You probably thought that was a terrible idea. But one Seattle student had no such misgivings.

Here’s the story: When a group of teachers in Seattle who all belong to a private Facebook teaching group spotted a Craigslist ad seeking a “taller college age brunette female” to take a college-level math placement test in the place of a student, they weren’t shocked by the cheating itself. Cheating happens; it sucks, and they do what they can to stop it, but it’s a fact of life when you’re teacher. They were, however, bowled over by how unabashed this particular student’s method of cheating was. So they decided to do something about it.

One of the professors who belongs to the Facebook group fit the physical profile of what the cheater, Christine, was looking for, and lived in Seattle. She contacted Christine under an assumed name and discovered that the test in question was the ACT Compass exam, which would help Christine get into a college-level online math class — something like pre-calculus or statistics, she wrote. Once placed, the fake-Christine might then have to take the class for her, too.

As the professor and Christine corresponded, the prof posted updates to the Facebook group. Obviously she never intended to take the test for Christine, and eventually sent her the following message in the hopes that it would teach her a lesson:

“I have been thinking about if I want to follow through with this. Turns out that it’s against Washington State code to pretend to be somebody else to take an exam or a class. As in, it's illegal. I don't know what the penalties are but I am trying to get a job and they might do background checks and I don't want to risk it. Plus the more I think about it the more I think about how unethical it is. I don't know what profession you want to go into but I don't want to go to a professional who cheated her way through school. Those requirements and classes are there for a reason. And I worked hard to get through undergrad and graduate school (without cheating) and it seems to undermine the hard work I've done to have you skate by. So, good luck to you, but I'm not going to be involved anymore. Sorry that probably sounded like a sermon, but I wanted to explain my reasons.”

Christine, however, was undeterred; no doubt she’ll go on to find someone else willing to take the test (and possibly the course) for her. The professor, meanwhile, found that even if students are caught cheating red-handed, the penalties are incredibly light — When she asked the vice president of student services at the college she teachers at about them, she was told the student would receive, in the following order, a written warning, reprimand, probation, suspension, and expulsion. But — and this is a big “but” — colleges don’t share information on their students, so if expelled, the student could simply go on to retake — and probably cheat on — the same course at a different school. The professor also reported Christina to her college, sending along the email thread as proof; if Christina tries to enroll, she’ll be shown the email thread. Even then, though, the college won't do more than put a hold on Christina’s admission.

Now, I’m not a teacher, so I can only address this issue as someone on the outside — but I actually don’t think the way to fix the massive cheating problems plaguing academia is by employing anti-cheating software or whatever. It goes deeper than that — so deep that students grow up thinking that it’s OK to cheat, or feeling like the only way they can succeed is by cheating, or any other number of justifications. It’s a huge undertaking, but if we can readjust how future generations think about academic honesty, then maybe we can start solving the problem. Heavier consequences for cheaters might help; so might teaching students to take pride in a job well done, as opposed to the high caused by “getting away” with something. Maybe even doing away with standardized tests altogether might push us in the right direction. We’ve got a long way to go — but I really hope we can get there. And soon.