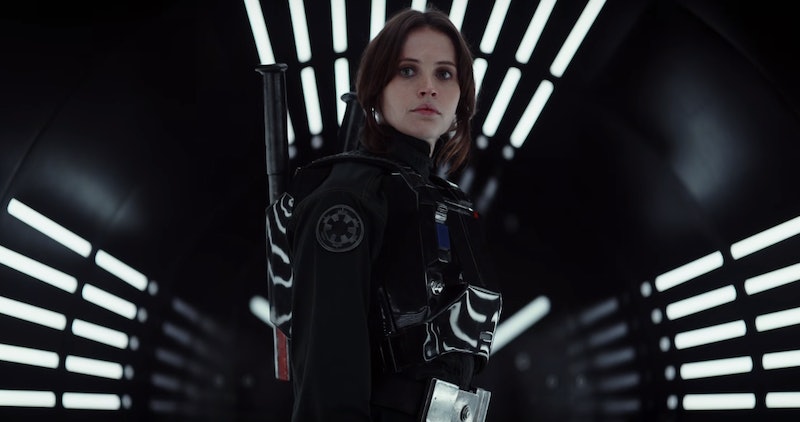 The Force is strong with Star Wars fans these days. Aside from the continuation of George Lucas' original story in Star Wars: The Force Awakens, fans are also getting one of the lost stories of the galaxy far, far away with this upcoming film, Rogue One: A Star Wars Story. But now it has been announced that yet another Stars Wars spin-off film will be released in 2020 — following 2018's already-announced Han Solo prequel. Yes, as of this very moment, five new Star Wars films are on their way instead of the already expected four (Rogue One, Episode VIII, Han Solo's story, and Episode IX). But what could the third Star Wars anthology film be about? Let's dive into the endless list of possibilities.

At this stage in the game, Disney and Lucasfilm are keeping all information about the 2020 film under wraps. However, since that the other upcoming anthology films — Rogue One and the Han Solo story — take fans back in time, there's a pretty good chance that this third film could be yet another Star Wars history lesson. Some of the original Star Wars characters could still use a little bit of a backstory, including the likes of Princess Leia, Yoda, Obi-Wan Kenobi, and (my personal favorite) Boba Fett. This is especially true since all of those characters still have unanswered questions and, therefore, the ability to hold up an entire film.

However, when contemplating what this third spin-off film could be, there are other factors that also need to be addressed. Te anthology films are non-episodic, meaning that they are connected to the episodes, but don't follow the episodes' linear path. Considering the fact that Han Solo's story would come before Rogue One 's spot on the timeline, my best guess would be that these anthology films can stand solely on their own — so we shouldn't expect this upcoming third film to be a direct sequel to Han Solo's movie or to Rogue One. The introduction of characters like Rey and Finn have added a lot more to the universe than just what plot surrounds the Skywalker family, and a third anthology film could flesh out the cinematic world outside of Luke even further.

Basically, there's still a lot of ground that can be covered. And, according to Disney CEO Bob Iger, "what we’re going to do in 2021 and beyond" has already been discussed between him and the head of Lucasfilm, Kathleen Kennedy. So get ready for all of your Star Wars questions to be answered, starting with the December 16 premiere of Rogue One.