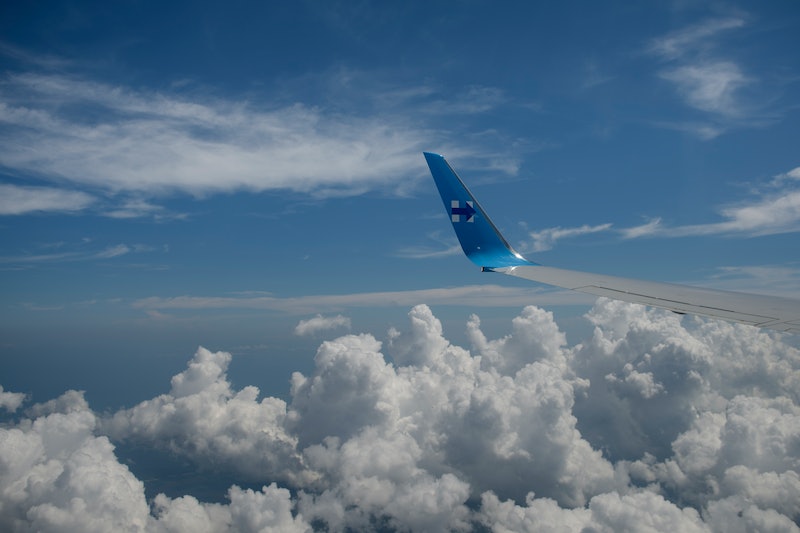 I don't personally get jittery when it comes to travel, but I've sat next to my mother, best friend and several strangers on planes who've been terrified of flying. It's made me empathize, whilst also questioning my own silent in-flight confidence. But while flying can be scary, the SkyGuru travel app might help take the pressure off. SkyGuru was launched at the beginning of September to help people overcome their fear of flying, and it works in a rather unexpected way. (Honestly, I really wish this app had existed that time my Mum gripped my hand so tightly I thought it would break during a one-hour flight to Ireland from the UK a few years back.)

Instead of trying to distract people from what's going on in the air or encourage them to stay calm, the SkyGuru travel app educates fliers about the noises and bumps that may be causing their anxiety by using professional aviation data. Using the phone's microphone, gyroscope, compass, accelerometer, barometer and built-in aviation weather forecasts, SkyGuru downloads all data for your flight pre-departure. When the app is put into flight-mode on the plane, it reassures nervous fliers by telling them what's going on.

Those of us who get severe flight anxiety can tune in onboard to learn more about situations that cause stress, such as why flight lights flicker, why the blinds need to be open, and of course, what causes all that turbulence. Reassuring messages such as, "Control yourself rather than the airplane," are sent to the user, too.

The app was designed by Israeli pilot and psychologist Alex Gervash, who runs a center for the study and treatment of aerophobia called Flying Without Fear. Speaking to the Daily Mail, Gervash revealed that he has over eight years of experience dealing with terrified fliers. Gervash also believes that when humans are stressed, they require more information and support to help them cope with the situation. "People need support during turbulence or with understanding a strange sound," he said.

Researchers estimate that 30 percent of the world's population suffers from a fear of flying, so what other tricks might help you kick back and chillax when you're 60,000 feet above ground? Well as well as finding cheap flights (because, let's face it, that certainly helps reduce the stress in and on the ground), these three travel hacks might also be worth a shot.

Game developer Theresa Duringer has a fear of flying. So, she decided to create a game to distract her from the fact that she was in a plane. Ascension VR has nothing to do with soaring through the sky and instead puts players in a fantasy world. It can played on a Samsung Gear VR mobile headset and was launched in August of 2016.

Studies have proven that trying to stay calm in the face of something that makes you nervous can actually have the opposite effect. However, downloading an app for in-flight meditation may be good for distraction as well as calmness — and luckily, there are plenty of choices out there. It's also a good idea to

Before a big flight, sometimes I like to Google, "How safe is flying?" just to put my mind at rest (because: logic). I also like being able to reel off a few facts to anyone nearby who might be more frightened than I am. Some of my favorite nuggets of information that will put the mind of any nervous flier at ease include the fact that you're more likely to die from a bee-sting or from falling out of bed than in a plane crash, and that each time we fly, we have a one 100,000th of one percent (.000014 percent) chance of dying.

Still nervous? Of course you're not.