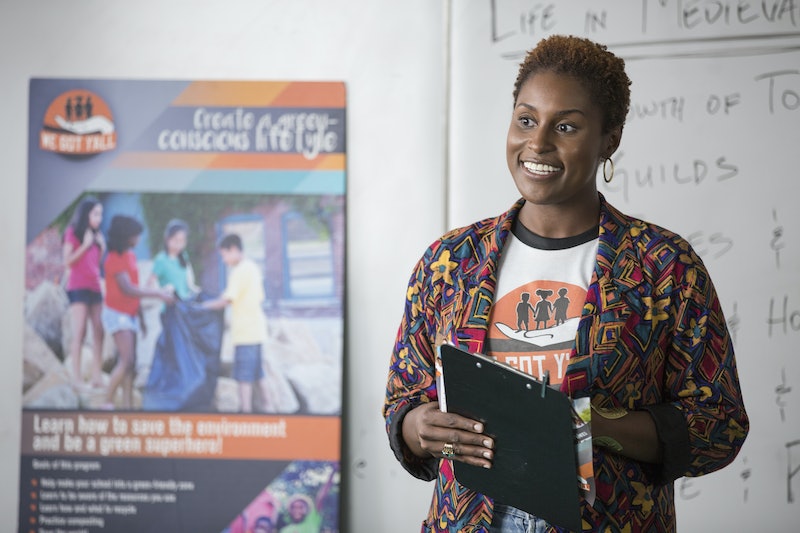 Some humans sail through life on a cloud of effortless social grace. Others of us stumble through any and all social interactions, worrying, ruminating, and saying the wrong thing all the time. Luckily, the second experience is far more interesting to mine for comedy! And nobody chronicles the experience of modern social anxiety quite like Issa Rae, who has covered the entire spectrum of awkward life experiences in her body of work.

From shouldering casual racism, to sexism, to bizarre things that people do at the office, Rae has been telling stories of what it's like to live in the mind of a young black female introvert for years. From her acclaimed web series Awkward Black Girl , to her book The Misadventures of Awkward Black Girl, this writer/producer/actress is a master at capturing the foibles of caring way too much in a world that prioritizes coolness (i.e., not caring). Rae is taking her signature incisive, witty, and squirm-worthy humor to HBO with her series Insecure (premiering Sunday Oct. 9th). The show follows two funny, intelligent women, Issa (played by Rae) and her best friend Molly (Yvonne Orji), as they fumble through their 20s in LA. Issa dates, works, and ultimately attempts to find out who she is in the midst of being painfully insecure.

In honor of the premiere of Rae's new HBO Original Series Insecure, we've compiled a highlight reel of a series of times that she perfectly epitomized having social anxiety to hilarious ends. Insecure premieres Oct. 9 at 10:30PM on HBO. Special advance premiere now streaming on HBO Now.

1. That Time She Talked To Herself In The Mirror

Many of us talk to ourselves in the mirror. Few of us are brave enough to do it in a public place, since the idea of getting caught is the epitome of humiliation. (I'd rather someone walk in on me peeing in a romper than see me muttering affirmations to myself). But thank you, Issa, for doing this on camera and helping me face my fears.

There are two types of people in the world: those for whom fist bumps come easily, and those for whom an invitation to fist-bump inspires an internal monologue. "Does she wanna fist bump, or is she mad at me? How hard should I fist bump? Fist explosion or no fist explosion? ..." Two guesses which category Issa falls into.

3. When She Courageously Accepted Her Inner Try-Hard

In the era of DGAF, Rae dares to be different. "I no longer need to be miss no fucks. I'm now Miss Give All the fucks." Note to my family — please chisel this on my gravestone.

4. When She Proved One Awesome Friend Is Way Better Than A Squad Of Randos

All introverts understand that quality means more than quantity when it comes to friends. Your brunch table might not be crowded, but night-Cheetos with your soulmate is way more fun anyway.

5. That Time She Shut It Down

Small talk is the socially anxious person's kryptonite. Add some cultural appropriation to the mix — just as Issa encounters, when her co-worker tries so use her as the office Urban Dictionary— and small talk is positively eye-roll city. Take a page out of Issa's book and let them Google “on fleek" for themselves (even if you DO know what it means).

6. When She Was Super, Super Awkward With Children

If you thought that interacting with adults was hard, try holding the attention of a room full of tactless 10-year-olds, just as Issa's character does every day at her job in Insecure. Warning: do not attempt to joke with said 10-year-olds. You will not win.

7. When She Played Off THIS Slick Intro

That feeling when a cute guy introduces himself to you, but he's actually hitting on your friend, so you turn your attempted handshake into some sick moves. Issa, if you promise never to change, we promise to keep loving you.

More like this
9 Time Catherine Cawood Was An Absolute Badass In Happy Valley
By Sophie McEvoy
Twitter Is Identifying With Sally Field & Jane Fonda’s Friendship In New Viral Video
By Jake Viswanath
At 28, Rosie Perez Risked Her Career To Stop Playing Stereotypes
By Gabrielle Bondi
'The Crown' Season 6 Has Suspended Filming "Out Of Respect" For The Queen's Death
By Bustle Staff
Get Even More From Bustle — Sign Up For The Newsletter
From hair trends to relationship advice, our daily newsletter has everything you need to sound like a person who’s on TikTok, even if you aren’t.