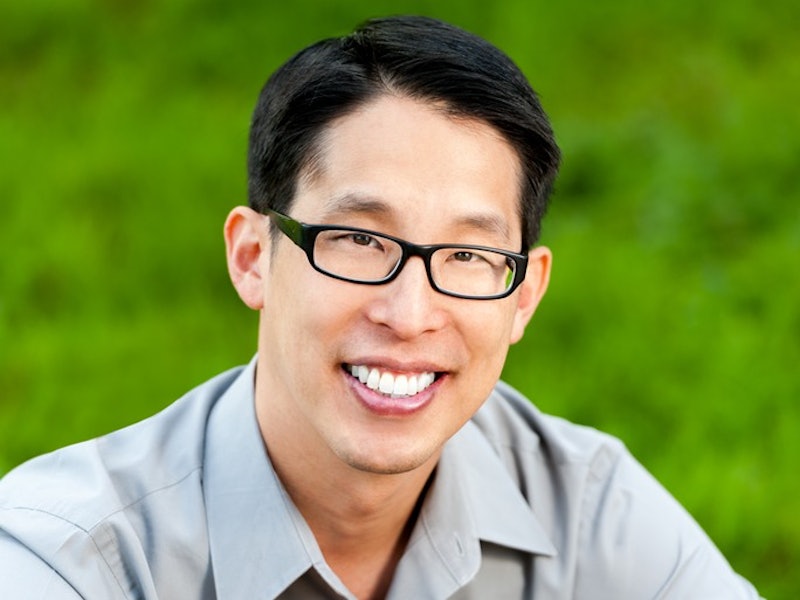 The 2016 MacArthur "Genius" Grants have been awarded, and Gene Luen Yang just became the third graphic novelist ever to receive a fellowship from the MacArthur Foundation. He's among five writers to receive grants this year, for "breaking new ground" with their work, and for their exceptional "originality, insight, and potential." Fans of Yang will be excited, but not surprised, to hear that he's being honored alongside these other writing superstars with a no-strings-attached grant of $625,000. Anyone who's ever picked up a Gene Luen Yang comic book or graphic novel knows that he deserves it. So here are a few more things you should know about our newest graphic novel "genius," Gene Luen Yang.

Yang is best known for his work in teaching, writing, and comics. The Eisner Award-winning graphic novel American Born Chinese is his most celebrated book to date, drawing on an amalgamation of his own past and traditional Chinese folklore to create a wholly new story (it is not an autobiography, though, and as far as I know Gene Luen Yang has never actually fought the Monkey King). His two-part series Boxers and Saints takes on both sides of the Boxer Uprising, through the lens of ancient Chinese legends as well as Christian mythology. His other writing includes the Avatar: The Last Airbender comic series and Superman for DC Comics.

And that's just to start with:

The Library of Congress named him the National Ambassador for Young People's Literature for 2015-16, making him the first ever graphic novelist to hold the position. His platform is "Reading without Walls," because he believes that reading "breaks down the walls that divide us."

2. His comic obsession started with Disney as a kid

Yang started drawing in elementary school, and he says that he wanted to be an animator after writing a report on Walt Disney in the third grade. In fifth grade, though, his mother bought him his first comic book (a Superman comic, because the Marvel comic he picked out looked too frightening to her), and he switched gears to drawing comics instead.

3. He started out as a computer engineer

Despite his early interest in comics and art, Yang majored in computer science at Berkeley, with a minor in creative writing. After graduating, he worked as a computer engineer for two years. He soon realized that his real passion was teaching, though, and started teaching computer science instead. It was while teaching that he started writing and drawing comics again (so don't let anyone tell you that art and science don't mix!).

4. He published his own comics under Humble Comics

If you can't find someone to publish you, publish yourself! It sure worked for Gene Luen Yang. He created the indie comic book publisher Humble Comics to print his first comic, Gordon Yamamoto and the King of the Geeks, which won a major self-publishing grant.

5. American Born Chinese was the first graphic novel to be nominated for a National Book Award

It was also the first graphic novel to win the American Library Association’s Printz Award. It's still regarded as his best-known work, combining the coming-of-age story of young Jin Wang, who just wants to fit in, with the tale of the Monkey King from the ancient Chinese epic, The Journey to the West.

6. He uses comics to teach math and coding

Yang's been teaching at Hamline University’s MFA program in Writing for Children and Young Adults since 2012 (sign me up??). He wasn't kidding around when he realized that his life's passion was teaching.

8. He’s the writer of New Super-Man

Move over, Clark Kent, because it's all about Kong Kenan now. Gene Luen Yang is the author of the New Superman series from DC Comics, set in Shanghai, China. DC actually pitched the idea of a "Chinese Superman" to Yang after he finished writing for Superman... and Yang said no. After a little more convincing, though, he signed on to reinvent the classic American hero, and Kong Kenan is now fighting for truth, justice, and the Chinese way.

9. He runs the cutest video podcast in the whole world

Well OK... I can't prove that it's the cutest video podcast in the whole world. But it's pretty darn cute (and educational!) as Yang talks comics and children's literature. He describes his podcast as follows: "This video podcast is just me having awkward conversations with people I admire." Check it out to see certified genius Gene Luen Yang being adorable and talking to other talented authors and artists.