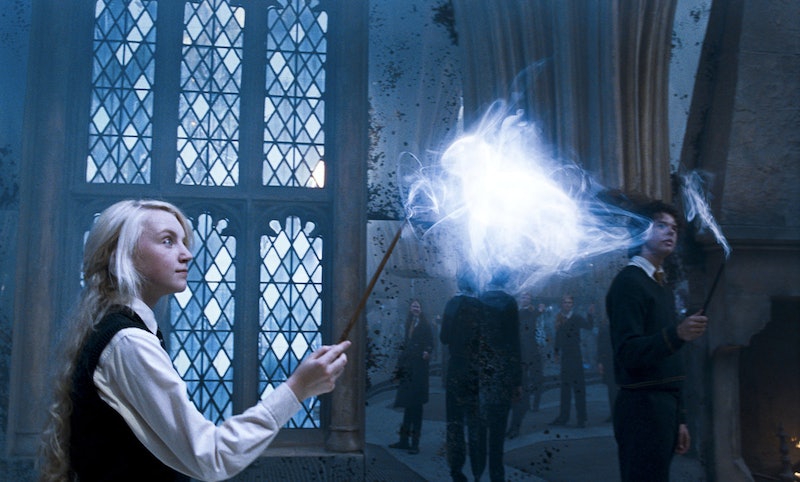 Potterheads had a field day on Sept. 22 when Pottermore released the highly-anticipated Discover Your Patronus feature, allowing users take an interactive quiz experience that took them through the ~Forbidden Forest~ to find out what their Patronus was at last. With a seemingly infinite number of Patronuses users could get, it only makes sense that some were happier with their results than others — but none were quite as notable as Evanna Lynch, who is not happy with her Patronus, y'all.

To be fair, Lynch's Patronus wasn't exactly what you would envision when you conjured the image of a creature meant to ward off the darkness and fight dementors. Despite the fact that all of Lynch's happy memories are with cats, she was surprised to find that her result was (drumroll, please) ... a Salmon. In fact, when she took the test the first time, it was a Greyhound, which seemed to make the second result she got all the more frustrating.

She's far from alone in #SalmonGate2016, though — tons of other users took to Twitter post-Patronus, surprised to get the salmon result as well. Hopefully they all found comfort in reliving Lynch's Patronus ordeal, which she live-tweeted.

Side note: can we make "Patronus crisis" the new twentysomething version of "existential crisis"? It seems much more fitting to our generation than anything else, TBH.

Fortunately, other Twitter users who looked into the mythology and meaning of the salmon as a symbol for wisdom and perseverance hit the scene pretty fast. And actually, when you look at all of the traits that the salmon embodies, the Patronus seems more than fitting for Luna Lovegood — a character that Evanna Lynch identified deeply with, enough that she campaigned to be considered for casting long before Luna's first appearance in the Harry Potter films.

So really, all you folks out there who got Salmon should be proud. Not only are you fierce, brave, and wise, but you've got something in common with Certifiable Badass Evanna Lynch. Seems like a win all around to me!