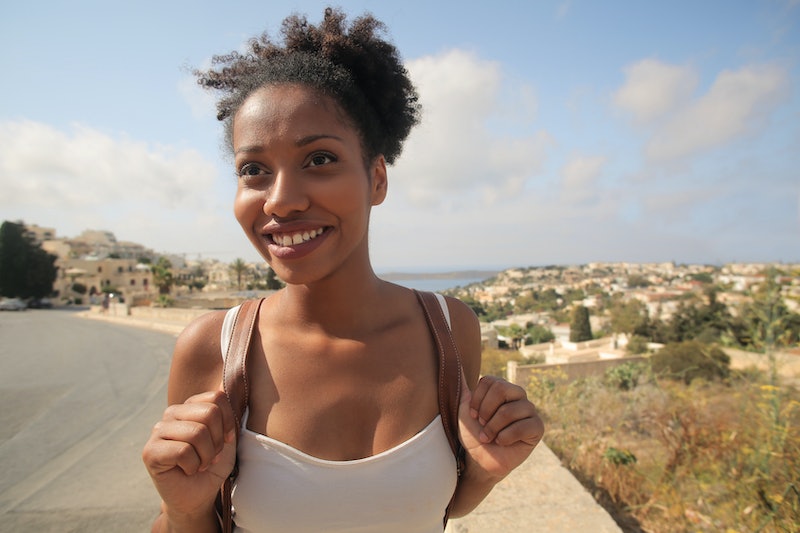 We put a lot of ourselves into our relationships, which is why the process of moving on from an ex can feel like it's taking an eternity. But like the relationship that ended, your phase of getting over the loss of that relationship won't last forever. Figuring out if you're truly over someone can be tricky, but there are signs that you're completely over your ex.

Last October, I was listening to music on shuffle when a song that I hadn't heard in a while came on. Normally, I would have immediately skipped the song due to the ties it had to my ex, but instead I let it play. It wasn't until the song ended and the next one began that my mind registered how I was able to listen to my ex's favorite song without thinking about them at all. It was in this moment that I realized I was totally free from this relationship and completely over my ex. "Anger is a form of connection, but disinterest is a form of release. If they don’t pique your interest, you’re over them," April Masini, New York based relationship expert and author, tells Bustle.

1. You're Hanging Out With Your Mutual Friends

If you're hanging out with your and your ex's mutual friends, this could be a good sign that you've moved on — as long as you aren't asking them for details about what your ex is up to. "When you’re not curious, you’re not interested, and when you’re not interested, you’ve moved on," Masini says. So if you're hanging out with your mutual friends and you don't have any urge to ask how your ex is doing, you're well on your way to being fully moved on.

2. You Donated Their Old Clothes

If your ex's hoodie has found its way into your pile of clothes to give to Goodwill, you've probably moved on from that relationship. Masini says a good way to tell you're over someone is when "you just don't feel like keeping that extra box of photos and gifts they gave you."

If you can part with the mementos, you've parted from your relationship. But keep in mind that, "this isn't the same thing as burning your ex's things because you can't stand the sight of their stuff." If there's no emotional reason you're purging beyond just wanting that extra storage space, you've moved on.

3. You Miss Being In A Relationship (But Not Your Ex)

If you're starting to miss being in a relationship, but you don't miss your ex, you're ready to start dating again. "Getting over your ex and being ready to be in a new relationship are often two separate things," Masini says. "That's why having a new partner with 'matching baggage' is a great way to find compatibility. Two people who've been through divorces often help each other heal, while forging a new relationship."

If you're ready to start dating again in a non-rebounding capacity, you're likely finishing up your process of moving on, and your new partner may play a key role in helping you get over your last relationship completely.

Feeling generally more upbeat could be a good sign that you've healed from your past relationship, Audrey Hope, a celebrity relationship expert, tells Bustle. "You notice you are kinder and not as angry as you once were," Hope says. "You can begin to like people again and have positive things to say about love and its possibilities."

After a breakup, it's hard to hold yourself accountable for any role you played in the relationship ending. But if you can own up to your own actions, you've likely moved on from the relationship. Stef Safran, a matchmaking and dating expert and owner of Stef and the City, tells Bustle that if you're truly over your ex, it'll show when you're talking about your breakup. "When asked about why the relationship failed," she says, "you take responsibility for your part and don't focus on the other person's issues."

6. You've Reflected On The Relationship

A huge part of your healing process should involve reflecting on the relationship. Safran says that a good sign you're moving on is if "you recognize and have processed why the relationship has failed and you don't want be back with your ex."

If you truly want to be over your ex, you need to unfriend and unfollow them. A sign you've moved on? "[You] no longer scour your ex's social media looking for clues that they are happy and dating," Rhonda Milrad, a relationship therapist and founder and CEO of relationship app Relationup, tells Bustle. If you no longer care about what your ex is doing or posting, then you're over them.

8. They're No Longer A Topic Of Discussion

Ending your moving on process means ending the conversation about the relationship. "If you are still hashing out the details of what happened and what you said and what they said, then you are still caught in the past and not ready to move on," Milrad says. "When it finally settles and the tape stops playing, your heart is ready for a new experience."

Basically, if you and your friends are talking about things other than your ex, you're ready to move onto new experiences that don't involve your ex.

9. You Aren't Planning How To Get Back Together

If you're still thinking up ways to get back together with your ex, then you aren't over them. "As time passes and you are able to understand your incompatibility and how it would have never worked out, then you are ready to get back into the dating scene," Milrad says.

If you're truly over someone, you'll know because you'll experience a sense of inner peace, Antonia Hall, MA, a relationship expert and author of The Ultimate Guide to a Multi-Orgasmic Life, tells Bustle. "There aren't anxious feelings when a text or a call comes in, and your first thought isn't that it could be them," Hall says. "Instead you're focused on creating new things for your life and you're not worried about how they're living theirs."

After a relationship ends, the most difficult part of your healing process could be clearing your mind. "When you can get back to staying focused on important tasks like work without being consumed by thoughts of your ex, you are moving forward," Monte Drenner, a licensed counselor and life coach, tells Bustle.

12. You're Your Old Self Again

"You can tell when someone is truly over an ex when the heart and mind return to their pre-relationship state," Drenner says. Getting to a mental and emotional state from before your relationship could be incredibly difficult since you've likely learned and grown from the relationship.

I mean even Taylor Swift, breakup songwriter extraordinaire, has written about this specific part of the healing process in her song "All Too Well," where she sings, "I'd like to be my old self again, but I'm still trying to find it." If you feel as if you've found your true self again, you're officially free from your ex.