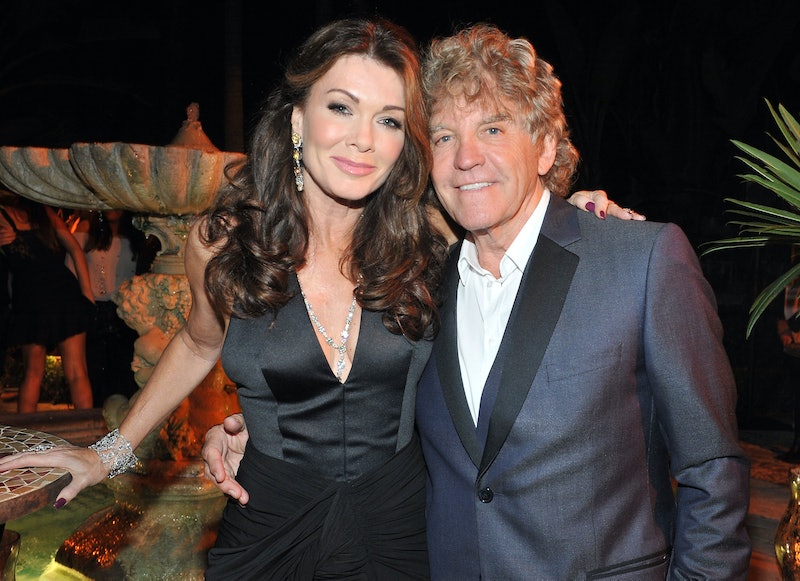 When it comes to Real Housewives couples, few have made it work more successfully than The Real Housewives of Beverly Hills' Lisa Vanderpump and her husband Ken Todd. The twosome has been married for 34 years, and seem to be plugging along just as strong as ever. What's their secret? They've obviously stumbled upon something that many other members of the Real Housewives franchise have struggled with. To figure this out, let's go back to the very beginning: how did RHOBH 's Lisa Vanderpump and Ken Todd meet? As it turns out, they actually got married within six weeks of meeting, which isn't what I'd expect for a marriage this long-lasting.

Back in 1982, Vanderpump was already a successful actress; she'd worked in the entertainment industry since she was 9, and by age 20, The Evening Standard reports that she'd earned enough to purchase her own flat in London. She had no need for a second job, so, when she was manning the door one night at a bar in Kensington called Corks, it was only as a joke.

When the bar's owner, Ken Todd arrived, she recalls, "I was being a smartarse. I tried to charge him to come in." Someone else might have been irritated, or outright furious at the prank, but Todd had a different reaction: delight. "She was like a breath of fresh air coming into my life," he says. Vanderpump describes their meeting similarly, "I thought, hello, he looks interesting."

There wasn't a lot to suggest a perfect match — Vanderpump was just 21, and Todd was 16 years her senior at 37 — but when you know, you know. After a whirlwind romance, the pair was married just six weeks after their initial meeting, on Aug. 28, 1982. Since then, they've only grown more close, expanding into a family of five: their daughter Pandora was born in 1986, they adopted a son, Max, in 1991, and, although she's just five years older than he is, Vanderpump is the stepmother to Warren Todd, Ken Todd's son from a previous marriage.

But a family isn't all they've built together; what they're better known for is their restaurant empire, including SUR, Villa Blanca, and PUMP in California, and how perfectly their personalities complement each other to keep things running smoothly. In Vanderpump's own words, speaking to the Standard in 2002, "We complement each other. He's the impulsive one, I'm more conservative. He's always looking for a new venture."

That dynamic that works for these two not only as business owners, but as husband and wife. These two have each other's backs without question, supporting each other through whatever they need. That, above all else, has to be the secret of their three-decade-long marriage.