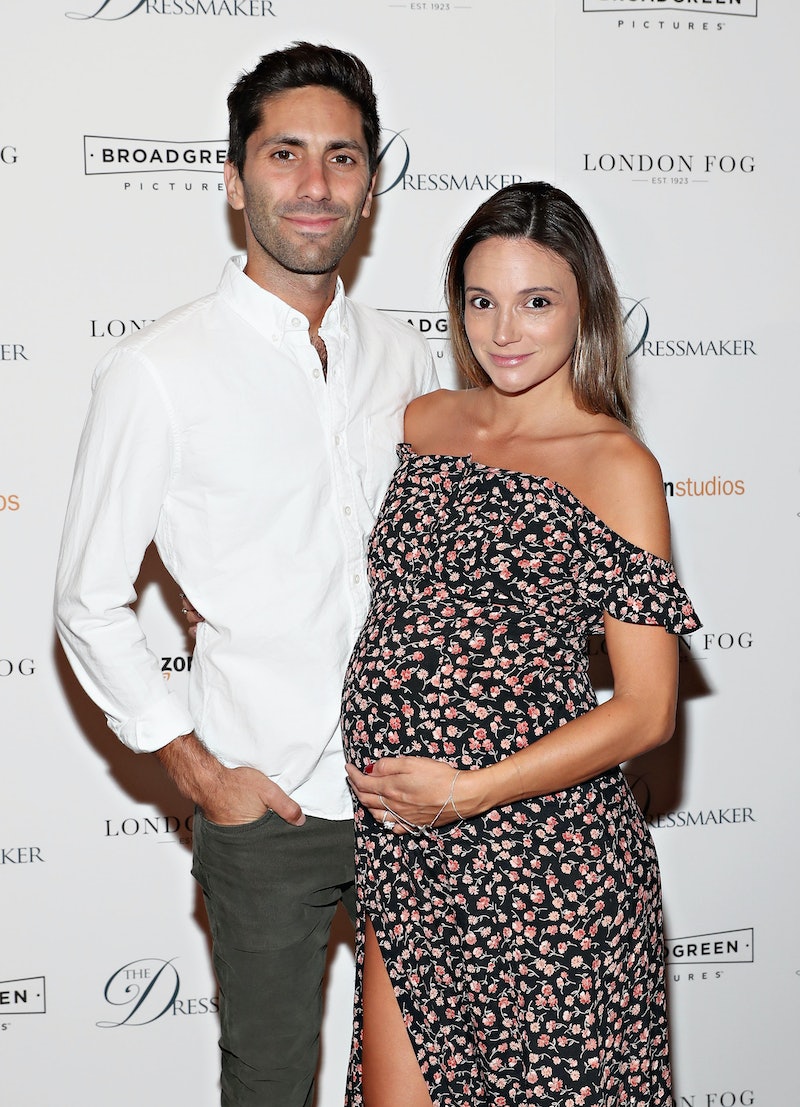 MTV's Catfish has just finished its fifth season, but host Nev Schulman is just beginning an exciting new chapter in his life. Back in May, Schulman and his then-girlfriend, Laura Perlongo, announced they were expecting their first child together, and since then, they've been sharing all the adorable and weird moments that come as they prepare to become first-time parents. A few weeks later, the couple got engaged, and they've since become #couplegoals, with their cute social media banter and photos. Now that they're both bonafide social media stars, people might be wondering how Schulman and Perlongo met.

Recently, the couple was at the center of a media storm when Perlongo wore a daring outfit at the 2016 MTV Video Music Awards. Opting for maximum comfort, Perlongo proved herself to be a confident woman who demanded attention — which really seems to be the type of woman Perlongo has always been — by wearing an open jacket with no shirt, putting her baby bump front and center. The freelance copywriter/creative director announced her pregnancy in a candid blog post on ATTN in May 2016, where she shared a bit of insight into how she met Schulman. And when I say "a bit," I actually mean almost nothing.

After the initial shock/weed wore off I knew right away I wanted this baby. I was strong. I was smart. I was full of love. I COULD DO THIS! I was confident I’d be great. Nev was confident he would be great. HE COULD DO THIS! Sure we’d only been dating long-distance 7 months (with a break in August) but we were optimistic and in love. It felt as good a time as ever.

She said she found out she was pregnant in February 2016 and that they had been dating for seven months, so that puts their meeting somewhere in the summer of 2015.

As for how they met, based on Schulman's biography on his website and Perlongo's LinkedIn, they were both based in NYC at one point, and now currently live in Los Angeles. Perlongo wrote that they had a long-distance relationship in her ATTN piece, so this leads me to believe that they met in NYC, but that Schulman went back to work in L.A. Because they are both work in creative fields, they possibly met through mutual friends in NYC or maybe worked on a project together, but the specifics are unknown publicly. Since April 2016, Perlongo's LinkedIn lists her as working freelance between L.A. and NYC, so it sounds like at some point they decided to become bi-coastal and be together.

Based on their careers and pasts, Schulman and Perlongo have a lot in common and are both talented, creative, funny, and intelligent. It might not be entirely clear how they met, but now they're inseparable and hopelessly in love. After their red carpet appearance at the VMAs, Schulman told ATTN, "Over the past eight months I've watched my fiancée carry and care for our child and transform into the magical goddess​ she is now and to me this is the most beautiful she has ever been. I couldn't be more proud of and inspired by her."

Awww! They're going to be the cutest parents. I already know.

More like this
Ralf Little’s Fiancée Has A *Very* Impressive Resumé
By Sam Ramsden
Selena Gomez Is Fine Being Single, But She Still Manifested Romance On 'SNL'
By Martha Sorren, Jake Viswanath and Jack Irvin
Why Sara Pascoe's Husband Is Familiar To Comedy Fans
By Alice Broster
Justin & Hailey Bieber's Bond Is "Unbreakable" Amid His Ramsay Hunt Diagnosis
By Bustle Editors
Get Even More From Bustle — Sign Up For The Newsletter