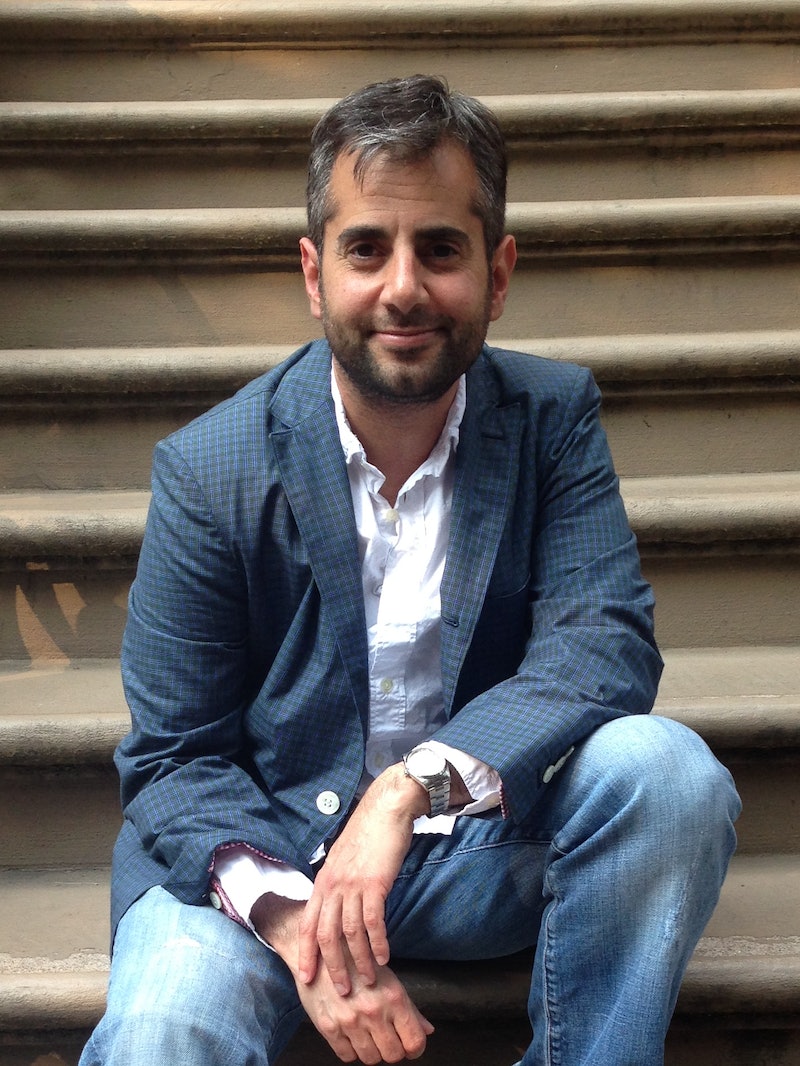 Changing your gender from female to male takes balls. And, speaking from experience, if you’re going to do it in front of five hundred coworkers at one of the top ad agencies in the country, you’d better have a pretty big set! Especially 20 years ago, when the word “transgender” didn’t exist. I admit, my original plan was to move away and transition in a place where nobody knew me. But my therapist got me to realize that I was going to need a lot of support to get through this, and that moving to a place where I had no family or friends and trying to transition in secret would cause more stress and actually make it harder for me in the long run.

My therapist was the one who opened me up to staying in Boston and transitioning. So in 1995, after two years working at the Boston-based agency Arnold Worldwide as Kris, I used the principles of branding and marketing, along with my ever-present sense of humor, to rebrand myself as Chris. It took nine months of planning and strategizing (I’m not Type A, I’m Type A-plus!) but I pulled it off.

I learned a few things along the way that I think anyone might find useful, transgender or not. I write about all of them in detail in my new memoir, BALLS: It Takes Some to Get Some — but here's some of what I've learned.

1. The way you act can dictate the way others react.

I’m a worrier by nature — it’s in my DNA. To give you an idea, in high school I was voted "Most Likely To Get an Ulcer." So when it came to changing my gender in front of everyone I knew, I was consumed with worry; worry about what people were going to think or say or do. It was paralyzing.

I figured my therapist would tell me not to worry about what I couldn’t control, but she said just the opposite: that I actually had the ability to control how other people behaved toward me — that the way I acted could actually shape the way others reacted. Figuring that out was like unlocking a secret inner power I didn’t know I had. I decided right then I was not going to be secretive about my transition — that would only lead to gossip and rumors and the assumption that I was ashamed; all the things I didn’t want. So instead, I became an educator. I was open and honest and willing to answer questions and share information. (Luckily, I’m an over-sharer to begin with, so this was really just an extension of my personality.)

2. If you want people to put themselves in your shoes, you have to be willing to put yourself in theirs.

As the first person at my agency to transition, I knew this was going to be news that would be hard to swallow for a lot of people. If I wanted them to respect me and my decision, I needed to respect how it would feel to hear it. So I didn’t go in with a militant attitude and demand immediate acceptance. I went in knowing that even though I’d been living with this gender conflict my whole life, everyone else was hearing about it for the first time. I realized I had to be patient and tolerant if I wanted people to be patient and tolerant with me.

Before my transition, I was well-liked and had a lot of friends at the agency. The last thing I wanted was for my coworkers to now avoid me out of fear of saying the wrong thing. My goal was to make them feel comfortable around me and to show them I was still the same person on the inside. So I made sure to keep my sense of humor through it all and drop jokes here and there to let people know I wasn’t sensitive about transitioning.

The first time I did this, it was like an involuntary reaction. I was walking past the editing suite as the head of AV was explaining to her intern the differences between all the adaptor cords. I happened to be right outside her doorway as she held up one of the cords and said. “This is a female to male.” I couldn’t resist. I stuck my head inside the door and said, “Hey, stop talking about me!”

Another way to make people feel at ease is to let them know what to expect. The more guidelines you can give, the more comfortable they are. So I was very clear about the steps I’d be taking, as well as the timeline. I was also clear with people not to worry if they messed up pronouns — to just correct themselves and move on. I let them know I wouldn't take it personally, and that if I corrected them they shouldn’t take it personally; I knew that they were trying and that was what counted.

You are not missing anything, ladies. Aside from it being just generally dirtier and smellier, there are etiquette differences that I find disturbing. First, when women have to “drop the kids off at the pool” the protocol is to make all kinds of noise to disguise what’s going on. Shuffling feet, repeatedly slapping at the toilet paper roll, coughing, etc. Not so in the men’s room. In there, it’s loud and proud. Let ‘er rip. Even more disturbing, if you happen to drop off a "kid" that is exceptionally larger than average, men often leave him behind for the next person to admire. Extra points if there is no toilet paper in the bowl to obstruct the view.

Another difference: While women tend to treat the “drop off” as a kamikaze mission, men like to make a day of it in there, openly walking in with reading material. Seriously, one day a group of three or four women were talking in the hallway right by the men’s room door and I saw a guy stroll right by them and into the bathroom with a freaking Harry Potter book tucked under his arm. Really?! Usually it’s newspapers or magazines, in which case it’s also common courtesy to leave those on the floor for the next guy. I know what you’re thinking … that’s not very sanitary. So trust me, you don’t want to know hand-washing statistics. I’ll just leave it at that.

5. When you’re living authentically, you do better at work.

A lot of women ask me if my career skyrocketed once I became a man. The answer is yes. But I think that is mostly because as a man, I was finally comfortable in my own skin, and that made me more confident. In meetings, I was more outspoken. I wasn’t shy about stating my opinions or defending my work. When I gave presentations, I was brighter, funnier, more engaging. Not because I was a man — but because I was happy. And because I presented well, I sold more work and became more successful. People even told me I looked taller. Some asked if it was the testosterone, others accused me of wearing lifts. The truth was, I used to hunch to hide the fact that I had boobs. With them gone, I stood up straighter and grew ¾ of an inch. (Hey, every little bit counts!)

The point is, all this inner confidence projected outward and made the agency and clients view me as more of a leader. And when that happens, so do the promotions and raises.

6. You should always ask for what you want.

As a woman, I never felt empowered to do that. But the more I was hanging around the guys at the office, I noticed they had no qualms about asking for what they wanted — whether it be an assignment, a promotion, a raise, a better office — you name it. Finally, I was like screw it, I work just as hard if not harder, and if I want something I’m going to ask for it too. I didn’t get everything I asked for, but at least I knew I wasn’t holding myself back. I took my reviews very seriously and outlined my goals, always asking my bosses what steps I’d need to take over the next 12 months to achieve them. It’s very hard for someone to say no to you when you’ve done everything they told you you’d need to do and you’ve done it.

Eventually, over the course of my 20 year career, I worked my way up to Executive Vice President, Group Creative Director: a great accomplishment, regardless of gender.

More like this
7 Of The Highest Highs (& Lowest Lows) From Love Island 2022
By Victoria Sanusi
7 Things We Learned From Rebekah Vardy's First Post-WAGatha Christie Interview
By Sam Ramsden
Your Daily Horoscope For August 12, 2022
By Mecca Woods
What Is Ben Affleck's Net Worth? At 50, The Oscar Winner Makes 8 Figures Per Film
By Meg Walters
Get Even More From Bustle — Sign Up For The Newsletter