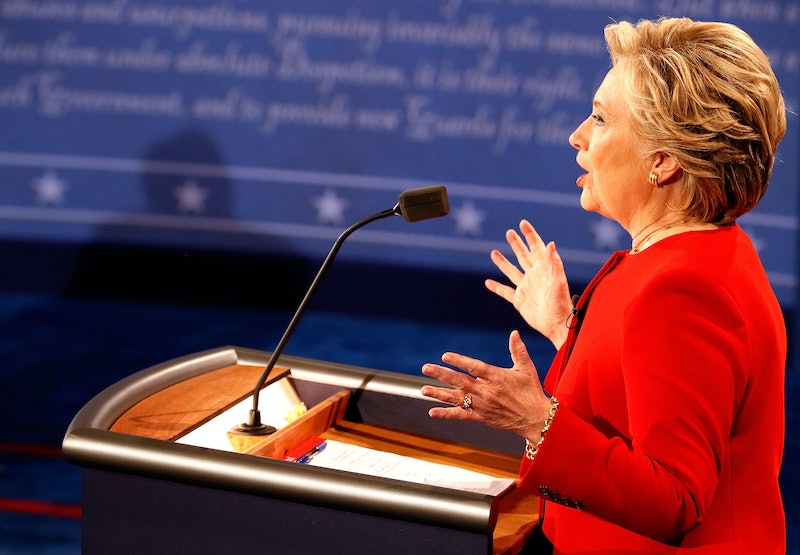 At Monday night's debate, Donald Trump played right into that "blame Hillary Clinton for everything" trope by saying Clinton has been "fighting ISIS [her] entire adult life." Like a lot of the mouth noises Trump has been making tonight, this is one (meant to discredit Clinton as incapable of showing results as a leader) can be clocked as not at all true pretty quickly. Unlike a lot of Trump's baffling and inventive comments, this one can be debunked with some basic elementary school level arithmetic — so break out your abacuses and TI-89s and get ready for some math.

For starters, there's the obvious: Clinton hasn't been fighting ISIS for her whole life, because that's a ridiculous statement and she predates ISIS by many, many years. Born in 1947 and only taking office as senator in 2001, she has lived an exciting life and done a lot of stuff; however, ISIS was established in 2004 — so, yes, Clinton was 57 by then. Per CNN's report on the history of the group, the group began in 2004 as al Qaeda in Iraq before officially becoming ISIS in 2006.

Assuming you start living your entire "adult life" when you turn 18, that would mean Clinton was apparently fighting ISIS in 1965, well before ISIS was even around.

Patently untrue statements from Trump and his surrogates are commonplace in this election, however, it's particularly telling when the lies compounded on one another actually stick to him. Paired with his comments that her security plans outlined on her website were somehow dangerous, it was a moment that hinted at Trump's potential to flounder big time later in the night.

And, of course, smelling blood in the water, the good folks of #DebateTwitter didn't hesitate to drag him for those comments.

Though it's certainly unlikely that the tides of this election will permanently change and that Trump's multiple flubs and untruths will finally catch up with him, I can't help but hope that these straight-up irrefutable numbers leave an impression.