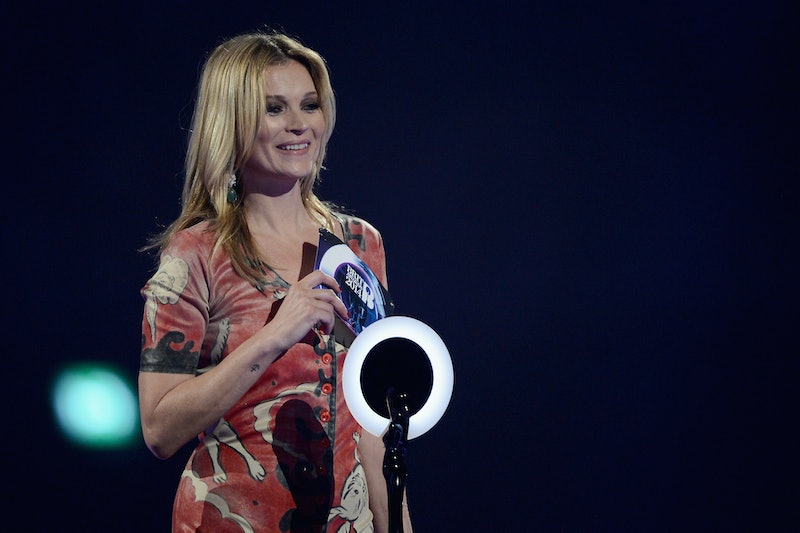 Vogue UK, I get it. You want the pageviews. Having a celebrity "exclusively" perform even the most menial of tasks will bring the online hordes a-running. Your idea wasn't a bad one: have Kate Moss — official icon of the fashion universe, who is conveniently married to the guitarist of The Kills — review an album. She's cool, she's been in music videos, she's the subject of millions of Google searches. What could go wrong? Nothing, you think, and ask her to review George Michael's new album, Symphonica. "How about 700 words by next Friday?" you say. Kate agrees, and you rub your hands together, cackling.

Let's not talk about the assumption that writing is something anyone can do (though for the record, I don't see anyone asking Kate Moss to choreograph a modern dance number). Let's not even talk about the fact that I, personally, adore Kate Moss and would follow her, sartorially speaking, to the ends of the world. Let's just talk about the final product. Here's a quick review of her review.

Mistake #1: All the insider elbow-rubbing.

Couldn't you have at least tried to pretend like Moss was an unbiased reviewer? Vogue's introduction begins:

Kate Moss has been a friend of George Michael's for years, and a fan of his work for even longer.

Moss makes it even worse by telling us that the album she's supposed to review was hand-delivered by George Michael himself. Repeat: George Michael showed up at her door and handed her the CD — making a slicing gesture across his throat, we can only presume. Once Michael leaves (after bugging Kate's entire apartment?), we're treated to anecdotes about the time Moss and Michael danced to "Everything She Wants" after the London Olympics' closing ceremony.

(Moss and another potential article subject.)

Maybe it's because he was in her apartment moments before, but Moss' review is full of hypothesizing about how George Michael...feels:

Praying for Time sounds like he's comfortable in his skin when he's up there on stage.

Mistake #3: Letting her husband chime in.

Apparently Hince listened to the album with Moss, and every time he offers an opinion, it becomes clear that one of them knows what they're talking about and one of them is just...thinking about the time she danced with George Michael after the London Olympics' closing ceremony.

Jamie says that the strings and the horns and arrangements throughout this album are so brilliantly balanced that he loves the way it's produced and sounds. I don't hear that, I just hear George.

Cringe. At least subtly pass his opinions off as your own, Kate — that's what marriage is for!

For the record, Moss is obviously not a trained music critic, and perhaps no one ever told her how to review an album, so this is not a personal criticism. But Moss' approach is to go through the album song by song and tell us what each one makes her think about. (See #2.) There are very elemental pieces of information missing here: she never summarizes the album stylistically, and there are no specific overall impressions of the quality. A reader unfamiliar with Michael wouldn't even know what genre the album falls under.

Mistake #5: Too many feelings.

File this under Don't Be Close Personal Friends With the Person You're "Reviewing." Instead of commenting on the album itself, Moss refers to moments that "take her breath away" and ones that "just touch me." I mean, Millennium by the Backstreet Boys touched me, too. But if (when) Rolling Stone asks me to review their 20th anniversary album, I'll keep my own STRONG personal feelings and reactions out of the text.

I LOVE YOU GEORGE!

While Moss' enthusiasm is adorable, the "review" is a well-meaning train-wreck. (Where's the editor who missed the comma in the last line?) See, Vogue UK, there's a reason people struggle all their lives to get a low-paid gig at Rolling Stone. Criticism is a fine (if maligned) art. So is modeling. Do the two have to be best friends?