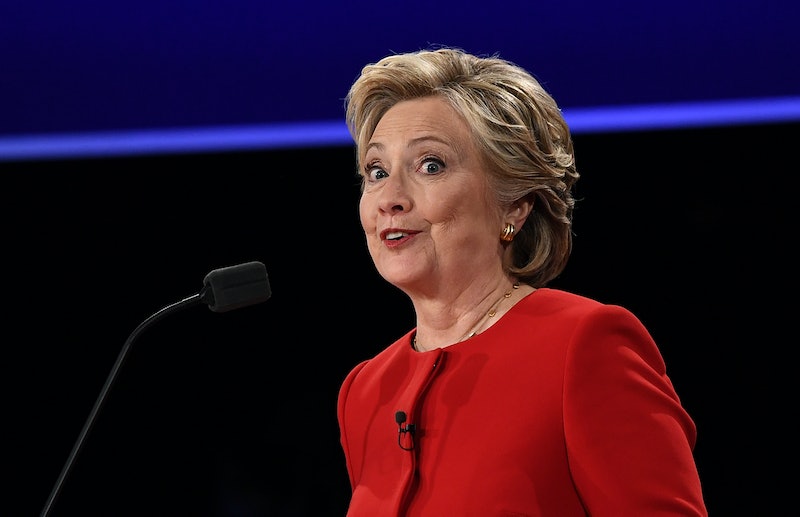 All eyes were on Hofstra University Monday evening for the first presidential debate. Donald Trump and Hillary Clinton faced off directly for the first time since either candidate announced their campaign, and after months of mud-slinging and attacks, the stakes couldn't be higher. The tension reached a fever pitch when Trump flatly accused his opponent of lacking the "temperament" for the presidency, paraphrasing attacks the Clinton campaign has leveled against Trump for months. In response, Clinton shoulder shimmied at the debate and it was a wonderful reaction.

Clinton has famously been preparing to debate Trump for weeks, studying every possible response Trump could have to predicted questions, but her opponent's "temperament" comment seemed to take even Clinton by surprise. She clearly found the implication ridiculous, beaming when moderator Lester Holt turned to her for a response and shimmying her shoulders with laughter, a reaction that quickly blew up on social media.

Clinton took Trump to task on a number of major issues during the first debate, including his support for the Iraq War (which Trump, falsely, denied, as he repeatedly has in the past), the large amount of money Trump received from his father before starting his career, and his history with lawsuits over racial discrimination in Trump Organization real estate projects.

Her reaction to Trump's "temperament" comment makes it clear that she was excited to take him on, criticizing his history of insulting political figures, celebrities, and sometimes entire classes of people. She proceeded to recite a litany of insults Trump has leveled at women and others. The GOP nominee, in response, attempted to justify many of the insults, saying:

You know, Hillary is hitting me with tremendous commercials. Some of it's at entertainment, some of it's at someone who's been very vicious to me, Rosie O'Donnell, and I think everybody would agree that she deserves it, and nobody feels sorry for her.

Then, bizarrely, Trump argued that he demonstrated his temperament for the presidency by resisting the urge to go after Clinton, apparently for her husband's infidelity:

You know, I was going to say something extremely rough, to Hillary, to her family. And I said to myself, I can't do it, I just can't do it. It's inappropriate, it's not nice.

After the debate, Trump again praised himself to reporters for not bringing up Clinton's husband's infidelity, which is odd, considering his comments above seem to do exactly that. It's no surprise, then, that Clinton looked gleeful at Trump's attack on temperament: she knew the topic gave him exactly enough rope to hang himself, and that seems to be what he did.