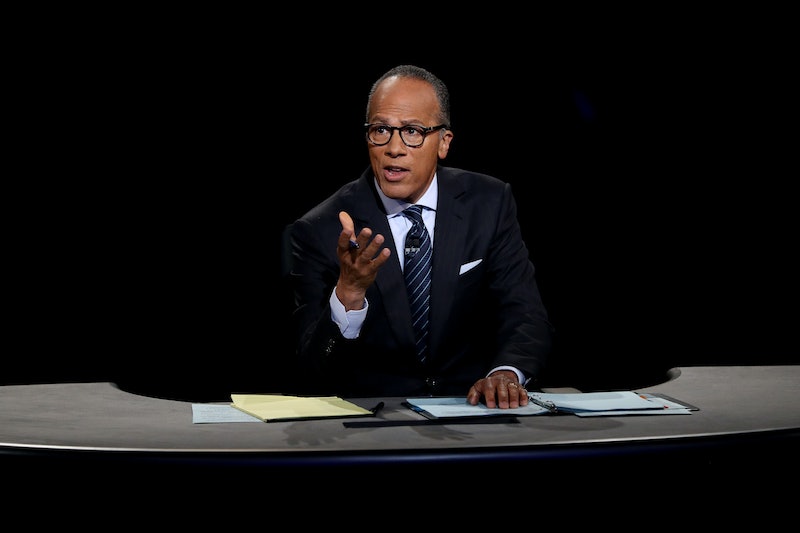 The first presidential debate Monday night mentioned many controversial things: stop-and-frisk policy, Donald Trump's history of bankruptcy, and even Hillary Clinton's appearance. But one topic the debate didn't address was abortion. Not even in passing, not even once. I for one am not surprised. After all, #AskAboutAbortion, the hashtag that started on Twitter to encourage moderators during debates to, well, ask about abortion, exists for a reason.

But I'm also not surprised because NBC Nightly News anchor and moderator Lester Holt had told us prior to the debate that the topics that would serve as the jumping-off points for his questions would include "America's Direction," "Achieving Prosperity," and "Securing America" — aka code for questions about money and war. Male-driven questions. Serious questions. Abortion, much like "women's interest" magazines, gets pushed to the frivolous fringes; because it's a "woman's issue," what's perceived as being more serious journalism must come first.

Personally, I think America's direction and prosperity (not to mention my personal security) have a lot to do with my right to choose — I believe we can't be secure, prosperous, or headed in the right direction if people don't have autonomy over their own bodies. But I'm not surprised that Holt didn't take the theme in that direction. Instead, I expected to hear exactly what we ended up listening to: quibbles over how long Hillary has been trying to defeat ISIS, Trump's tax returns, birther arguments, and how Mexico is making America look bad by building more stuff. (Because all those issues seem more pressing to the well-being of America than whether or not a woman in danger can have a second trimester abortion.)

While Holt did a good job raising the issue of police shootings of black people in America, it's too bad he didn't also leave time for this pressing social issue — especially when the Supreme Court hangs in the balance and Trump's actual stance on abortion has been so hard to pin down.

And then there was this excellent point — one of national security. Bombings of abortion clinics and harassment of providers should be considered domestic terrorism, plain and simple. Maybe if we all start referring to them that way, threats on providers will be taken more seriously.

The second presidential debate on October 9 will be a town hall format, which should make a question about abortion more likely — or so we can dream, anyway.