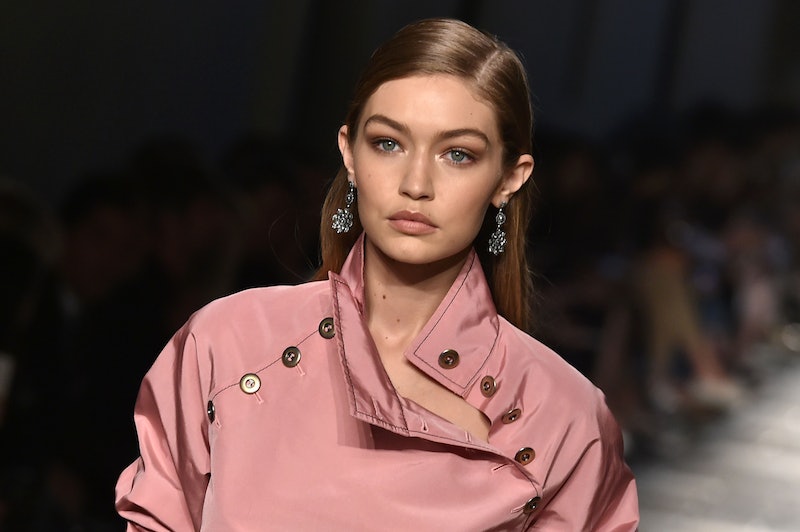 Recently, Gigi Hadid made a statement that many people, especially women, can learn from: There are times when putting yourself first is absolutely necessary, and during these times, you don't have to worry about anyone else. After someone came up behind her, grabbed her, and lifted her up during Milan Fashion Week, she reportedly elbowed him in the face until he dropped her. (A "prankster" known for engaging in similar antics with celebrities and gaining publicity as a result has taken responsibility for the incident; his statement can be found below.) And despite some sexist media coverage of the incident claiming that she was being unkind to him, she stood by her decision as an act of self-defense. How her elbowing impacted him was irrelevant, because his attack put her safety at risk. That's just one example of a time when you need to look out for yourself and forget about how your actions are affecting other people.

Unfortunately, our culture socializes us — particularly women — to comply with others. When the rest of our friends want to do something, we're not supposed to object. When people hurt our feelings or even attack us, we're supposed to consider how they'll feel if we stick up for ourselves. Media coverage of Hadid's attack was a prime example of this, much of it criticizing her rather than her attacker — which makes her essay in Tuesday's Lenny Letter all the more important. Wrote Hadid:

Honestly, I felt I was in danger, and I had every right to react the way I did. If anything, I want girls to see the video and know that they have the right to fight back, too, if put in a similar situation. Practicing self-defense is important so that when you’re in the moment, reacting from muscle memory comes more naturally to you than freezing up. Confidence in your own ability to defend yourself comes with educating yourself about it, and is a massive advantage when in an unsafe situation.

Hadid refuses to fall in line with the kind of thinking that puts us in a position where our own needs are constantly on the back burner and we risk our own health, safety, and peace of mind to accommodate people who don't deserve our accommodations. Here are a few other times where you don't have to think about anyone but yourself.

1. When Your Physical Health Is At Stake

When going along with what someone else wants could compromise your physical health, you have no obligation to do it. For example, I've known people who felt pressure to have sex without condoms because their partners didn't like wearing them. But when it comes to practicing safe sex, it doesn't matter if your partner doesn't want to (not that you should use a method they're not OK with, either; the alternative is to just not do it). Your desire to keep yourself safe from pregnancy and STIs trumps someone else's desire for sex. Your body, your choice.

2. When Your Mental Health Is At Stake

We should never have to compromise our own mental health to make life easier for someone else. I learned this last year, when I decided to block a former friend's phone number. She was saying things to cause me stress, and I knew I had too much other stress in my life to deal with her on top of it. I felt guilty about it, but another friend told me, "You need to protect yourself." And that's absolutely true. It's OK to do something that might upset somebody else when the alternative is to be stressed out and distracted.

3. When They're Not Thinking About You

Too often, we go out of our way for people who don't return the favor, but we don't actually have to. You don't have to rearrange your schedule for a date with someone who has been impossible to reach. You don't have to put up with your family when they're dragging you down. Save your time and energy for people who are granting you theirs. By giving people more than they're giving us, we send the message that we're less valuable than them and don't mind being pushed around. You never have to give more than you take in any relationship.

4. When You Can't Help Anyone

You know how, on a plane, the safety video tells you to put on your gas mask before you help anyone else with theirs? That's partially because you'll probably fail in your attempt to help the person next to you if you can't breathe. Similarly, you shouldn't try to take care of others when you yourself are compromised, whether that's by an overly demanding schedule, physical health problems, or emotional distress. When you try to do that, you set yourself back further and don't help as much as you can when you're at the top of your game.

5. When Others Don't Need Your Help

Even when you do have time and energy to give, people shouldn't be asking you for it unless they actually need it. For example, it's disrespectful to your time to ask you questions they can Google or ask you to get something for them that they can just as easily get themselves. If somebody is going to request your help, they should first do their due diligence to try to solve the problem themselves, and then thank you so that you don't feel taken advantage of.

Hadid's attacker released the following statement to The Hollywood Reporter on Sept. 22:

While I consider Gigi Hadid beautiful, she and her friend Kendall Jenner have nothing to do with high fashion. By doing this, I encourage the fashion industry to put true talents on the runway and Vogue covers instead of well-connected cute girls from Instagram. You can call it a manifest or a protest. This is also a wake-up call for Anna Wintour, who turned Vogue into a tabloid by putting Kardashians and other similar celebrities on a cover of a well-respected magazine.