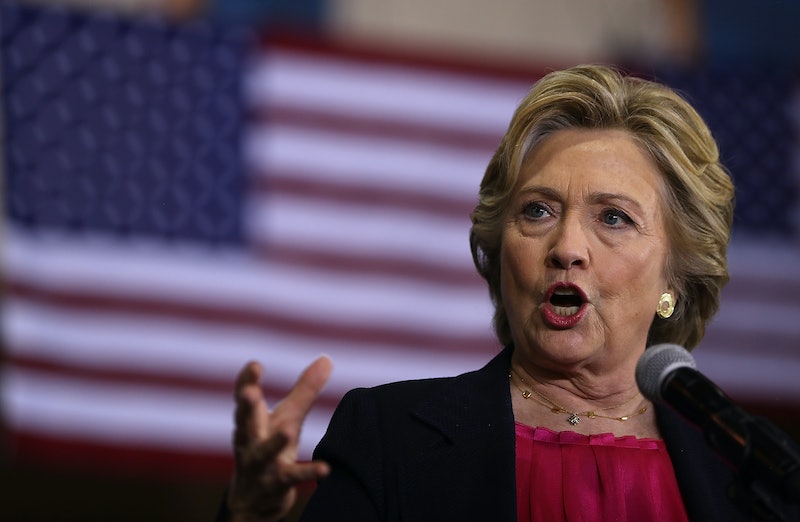 Everyone loves a good political Halloween costume. Who doesn't want to dress up as something that is especially relevant to social news and moments? And this year being an election year, there are so many great 2016 election costume ideas to try out no matter your party affiliation, including plenty of ridiculous moments and quotes to pull from for inspiration. With that in mind, we've got some actually funny Hillary Clinton Halloween costume ideas that will have people wondering whether you're "with her."

The 2016 presidential election has been scary enough as it is, so it doesn't make sense to make things even worse this Halloween with frightening costumes of Clinton or Donald Trump. As we head into voting season pretty quickly after Halloween — Election Day is Nov. 8 — these costumes ideas might just help you get in one last laugh.

So here's a roundup of seven iconic Clinton moments from this election and beyond that will have you ready for Halloween. These costumes reference everything from the so-called "deplorable" Trump supporters to the "woman card" that will have Clinton laughing her way to the White House. And the best part is, all of these costumes are relatively easy to put together.

This one is super easy because all you need to do to be Clinton is invest in a mask that looks (something) like her. There are a bunch of options online. But maybe they look funnier on the Internet.

This mask from Party City actually looks just like her because it's literally a cardstock print-out of her face. So there you have it, super simple and kind of funny because it's so minimalist.

Let's face it; Clinton is never going to live down her emails. And that's especially true as long as Trump can help it. We know what he's capable of — we watched as he maintained a rumor about President Obama for five years.

There are a few ways you can do this. So here's what you need for a Clinton email costume.

Try to go with a lighter color outfit, like a plain white t-shirt or dress.

Do a search on WikiLeaks for Clinton's emails — they have an entire archive dedicated to Benghazi emails — and print them. If you use regular paper, you can just cut and glue or staple the emails to your t-shirt or dress.

If you're feeling extra dedicated, you can print them out on t-shirt transfers and then iron the emails on to your t-shirt or dress for a Clinton costume that will last forever (just like her emails).

Clinton is definitely a fan of the pantsuit. She has them in a variety of colors including red, blue, green, yellow. She loves a good pantsuit.

So, find yourself one online. If you want to go as "debate-ready Hillary," you might try a blue or red look.

Otherwise, the brighter the better.

And if you're trying to avoid breaking your bank account, you might try to find yourself a Clinton pantsuit t-shirt instead.

You can find one at Zazzle.

We all know the photo of Clinton texting. Even she knows which one I'm talking about. It's a classic. For this look, you'll need a few things.

Get yourself a pair of cheap sunglasses. You can likely find a pair at a mall or Forever 21 can hook it up.

You'll need a black or navy blazer. You can find them at various stores like H&M or Target.

You'll need to get yourself a turquoise necklace and a turquoise brooch, and Etsy has the hookup for both.

Get your phone out and check your email. Obviously.

Way back when the primaries were heating up, Trump made a remark about Clinton allegedly playing the so-called "woman card." Hey, if there's a such thing, then sign me up. During a press conference after winning Connecticut's primary, the former reality TV star said, "If Hillary Clinton were a man, I don't think she'd get 5 percent of the vote. The only thing she's got going is the woman's card."

Now you can go as the woman card this Halloween.

Get yourself a cardboard box to wear, and paint it with a Clinton logo — kind of like Mitt Romney's binders full of women, but not.

Get yourself a deck of "woman cards" and hand them out. Or don't, because being a woman already means we're making less money and nothing comes for free (unless you play the woman card). You can also take these woman cards and glue them to your cardboard costume.

Of course, Hillary has a deck for you.

Clinton has struck a nerve with Trump supporters. I mean, as if they weren't upset enough with her already, she had to refer to them as "deplorables." During a fundraiser, Clinton said, "You know, to just be grossly generalistic, you could put half of Trump's supporters into what I call the basket of deplorables. Right?" She later took back part of the comment.

You might as well get yourself your very own basket of deplorables for Halloween!

Find a basket. Maybe you have one at home. Or maybe you need this one from Michael's.

Fill that basket with some deplorable Trump-related stuff. I'm not going to advocate spending any money on Trump merch, but you can get yourself a Trump action figure and be certain that the proceeds will go to an important organization that helps undocumented immigrants.

Throw on a "Make America Mexico Again" hat and you will definitely reach the haters.

Get in your last presidential jokes this Halloween with these Clinton costume ideas because the general election is right around the corner. And I can assure you, we won't be laughing as much after Nov. 8.

More like this
Juneteenth Is Now A Federal Holiday — Here's What That Means
By Lani Seelinger and Syeda Khaula Saad
34 Quotes That'll Inspire You On Juneteenth & Beyond
By Syeda Khaula Saad and Siena Gagliano
How To Fight For Reproductive Rights, Based On How Much Time You Have
By Courtney Young
How 5 People Upended Their Lives To Fight For Abortion Rights
By Hannah Smothers
Get Even More From Bustle — Sign Up For The Newsletter