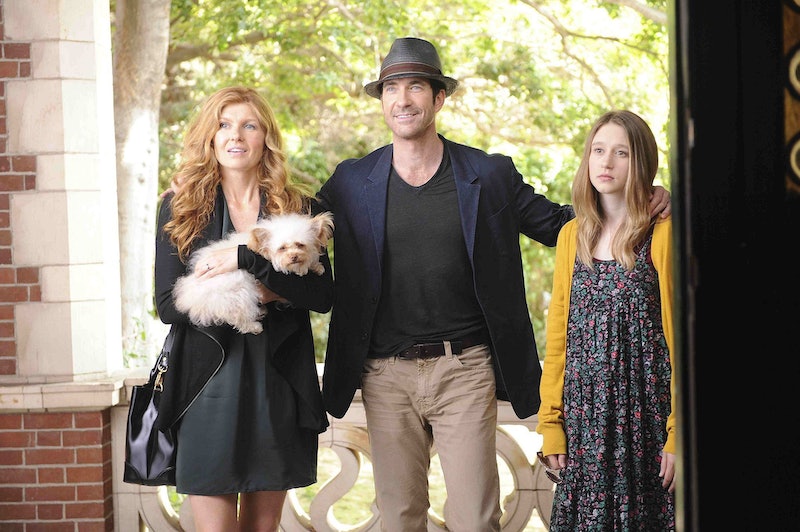 There are so many theories surrounding American Horror Story ’s 6th season, you could get lost in it for hours trying to come up with possibilities for what’s to come. Once Ryan Murphy revealed that every season of American Horror Story is connected, it became a game to nit-pick the tiniest of details to try to figure out what’s going on, which is what I’m going to do now. Think back to the very first season of American Horror Story. I have a strong feeling that the Harmon family is connected to Roanoke. There are too many parallels between the documentary and what happened in Season 1 for Ben, Vivien, and Violet to not be involved.

Before I dive into crazy theories and what may be happening on the show, let’s talk about what’s actually happening on AHS: Roanoke. Ryan Murphy recently told Entertainment Weekly of the season: “You’ll see starting in Episode 6, the show has a huge turn and the thing that you think you’re watching is not what you’re watching.” So, really, I have no idea what’s happening. I think Matt and Shelby are retelling their experience of living in a haunted house in North Carolina. I don’t know if those are their real names, if the people telling the story are actually them, or who the names of the actors playing the characters are. I literally have no idea what’s actually going on. Thanks, Ryan Murphy. At least until the show tells viewers what's happening, fans can fixate only the tiniest of details, which leads me back to how the Harmons might be connected to this season.

As fans all remember quite well from Season 1, Dylan McDermott played Dr. Ben Harmon, a psychiatrist. Since we still don’t really know what time period the show is meant to take place, what if Ben Harmon heads down there to give Matt and Shelby some well-needed therapy? The visit could pre-date the Harmons move to California. Alternatively, he left to go back to Boston to deal with his mistress’ pregnancy in Episode 2. Maybe he went down to Roanoke before coming back to LA.

The Whole "Documentary" Is About Murder House

I know there have been theories floating around that the documentary is actually a show made by Billie Dean Howard from Season 1. I’m starting to like that more and more. We know she’s obsessed with the Roanoke story and she knows everything that happened in the murder house. What if this is just a fictional show that she created based off of the Harmon Family? There are so many similarities between them that this might actually make a lot of sense.

Kind of similar to the theory before, but what if Matt and Shelby had moved into Murder House after the Harmons died? It’s probably a little less likely since that would be way too similar to Season 1, but come on people die on the property and stay there, the return of Piggy man and the murderous nurses? It’s way too similar. Plus, on crime shows like that, they tend to change names, but maybe they changed the location too.

Vivien And Shelby Are Friends From LA

If the timelines match up, what if they were some how friendly with the Harmons in Los Angeles when they lived there? Vivien was at the GYN a solid amount of times for that demon baby she had growing in her and Shelby could have been there too, before she lost her baby. After all, Vivien needed some damn friends in that place. She had a rough time.

The Actors Researched The Harmon Family

Preparing for a role where you have to pretend to be scared by a haunted house? If the show is filmed in LA, it only makes sense to head to a haunted house. What if the “actors” of My Roanoke Nightmare go there and meet the Harmon family? You never know. After all, it's Ryan Murphy's world and we're all just living in it.