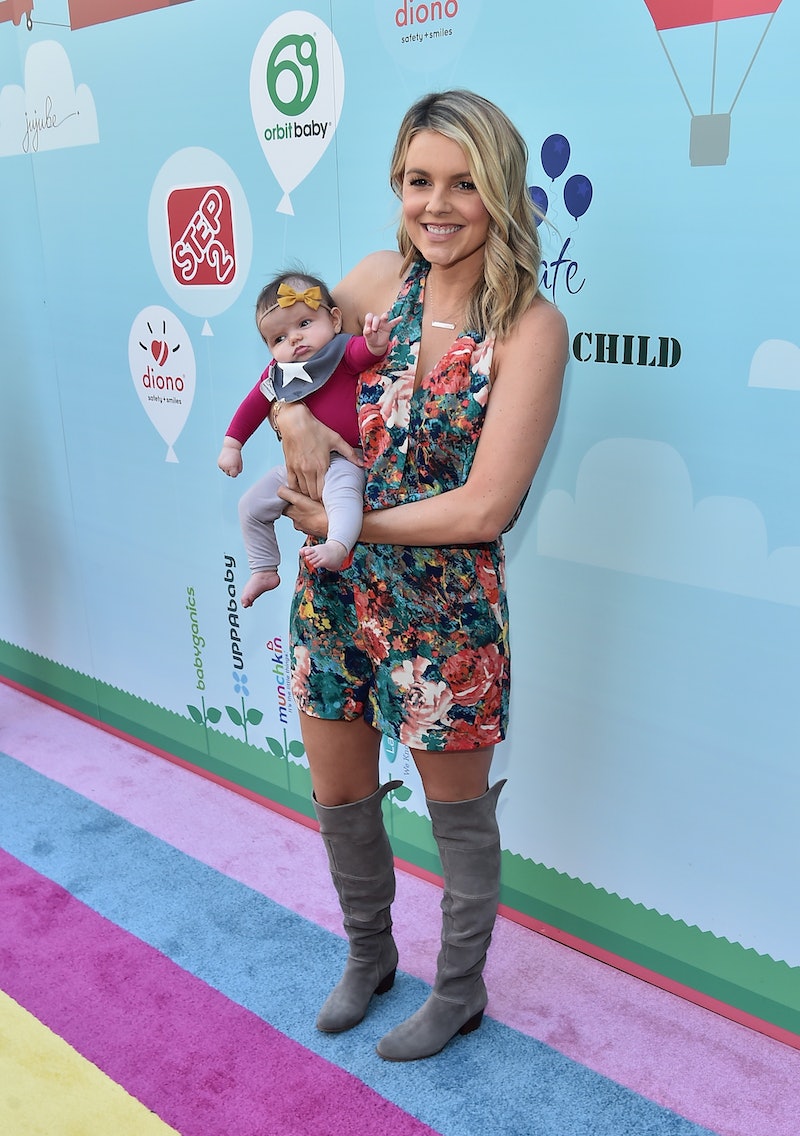 Earlier this year, former Bachelorette Ali Fedotowsky welcomed daughter Molly Sullivan with fiancé Kevin Manno, and the family embarked on a whole new journey together. Unfortunately, it didn't take long for trolls to attack her on social media for apparently looking too put-together and glamorous as a mom (women can literally never win). Now, in an interview with Bustle, Ali Fedotowsky responds to her motherhood critics and says that her new role definitely is harder than it looks. "Am I disheveled a lot of days? Absolutely," she tells Bustle. "I would say every other day, I look like a mess — my hair's a mess and I don't have makeup on and I'm in sweats or my yoga pants."

Fedotowsky says those days are the reason that makes a point to occasionally dress up and put on makeup, even if the internet has gotten super critical about it. "I feel like if there were things you did in your life, like put makeup on, get dressed, or go out, if that made you feel good before having a baby, you should still do that after having a baby and feel good, too," she says. "I'm a big proponent that if I feel good, I'm going to be a better mom to Molly. So if putting on makeup and putting on a cute little outfit makes me feel good sometimes, I'm going to do it."

Since Baby Molly was born in July, Fedotowsky has been posting plenty of adorable photos of her new bundle of joy on social media, but says life required quite an adjustment since Molly's birth. "I just look at my daughter and I'm like, 'Oh my God, I'm a mom,'" she says. "I can't believe this little human was inside my body. It's so mind blowing."

The birth of a child is an amazing thing, and it should have been celebrated, or at least respected, by everyone. But, being in the public eye meant Fedotowsky received some criticism that she supposedly didn't "show what it's like to be a 'real mom,'" as she wrote on her blog AliLuvs.com. She tells Bustle that while 90 percent of her experience with online moms has been positive, there still has been some negativity — and it has really surprised her. "The one major negative is that moms love to put down other moms or tell you what you can and cannot be as a mom. I just find it to be so silly and really disheartening," she says. "I think that all moms know what it is to be a mom. One thing I absolutely love about my following is that I can tweet a question — like 'We're not sure what to do about pacifiers' — and I'll get so much advice."

Fedotowsky says she is trying not to focus on the negative comments and hopes that mothers can be there each other more often. "It's funny — I'll post something about swaddling Molly and so many moms will say, 'You don't swaddle? How could you not swaddle?'" she recalls. "Then the other half of moms will say , 'You shouldn't swaddle your baby!' You just can't win sometimes."

She continues: "I don't know why we do that to each other. Maybe it's insecurities — I honestly don't know or what could be done to change it. I think we just need to support each other more in general."

That's something all women — whether they're mothers or not — should get behind.