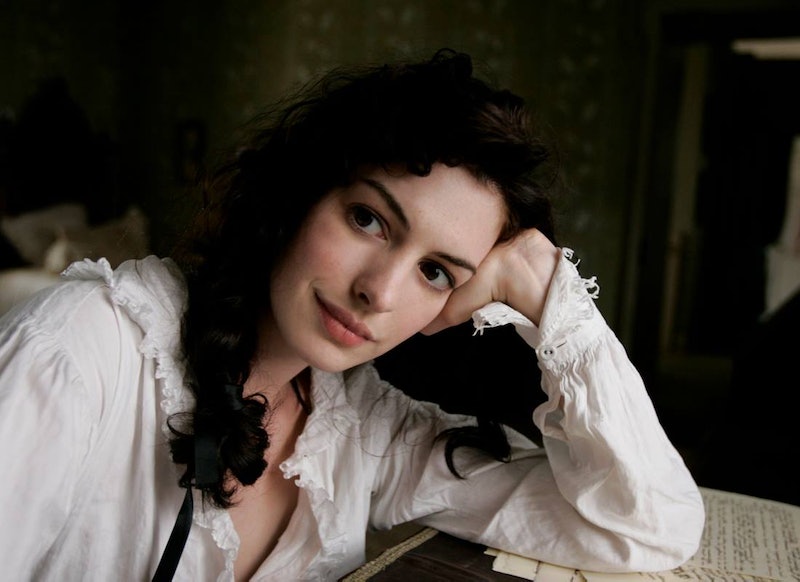 In the nearly two centuries since Jane Austen’s death, many have followed in her footsteps, but few have equaled her. She remains a standout — an icon that most writers can only aspire to emulate, though we’re always looking for ways to try. Since there’s nothing easy about writing, we’re lucky that there are innumerable tips out there for writers in want of advice, including ones based on the life and work of Austen herself.

Author Rebecca Smith — who happens to be an Austen descendant — sheds light on the lessons to be learned from the literary legend in The Jane Austen Writers' Club: Inspiration and Advice from the World’s Best-Loved Novelist. Smith gives Janeites the perfect excuse to revisit Austen’s work and analyze all what makes it great. She touches on everything from dealing with time to writing children, inserting some of Austen’s best scenes along the way.

Smith’s book is extremely thorough. Not only does she offer up advice, she delves into the author’s background, bringing lesser known but still intriguing information to light. There’s a lot to be learned, both about Austen and writing.

Below are 10 lessons every writer can take away from the life and work of the incomparable Jane Austen.

Austen spent a lot of time writing to improve her craft, but that wasn’t all she did. Reading was one of her big hobbies, and as Smith points out, she thought critically about what did and didn’t work for other writers. That means you don’t have to feel guilty the next time you step away from your latest project to get lost in a book.

2. Make Sure Your World Works

Whether you’re writing about your hometown or a place born in your imagination, everything in your world has to make sense. It’s crucial that there’s logic behind aspects ranging from your characters’ motivations to the rules of their society. Smith writes, “If a reader notices something and thinks, ‘That wouldn’t happen like that!’ you have lost them.” No one wants that.

3. Create Characters That Are Human

Austen is responsible for creating some of the most memorable characters in literature, and she did so by giving them the complexity of real people. Even if you aren’t actually writing about humans, remember that your characters should be multifaceted. Smith highlights Austen’s warning against writing heroes without flaws and villains that are pure evil.

4. Use Subplots, And Use Them Well

You might have your plot worked out, but it’s also important to consider deepening your story with subplots. Austen did this masterfully, using secondary characters as a way to explore various themes.

“Readers delight in the way that Jane Austen works with the different themes in her novels,” writes Smith. “We see characters facing similar dilemmas and quandaries and responding in contrasting ways.”

Consider Pride and Prejudice ’s Charlotte Lucas, for example. She provided a clear and interesting contrast to Elizabeth Bennet on the issue of marriage. Unlike Lizzy, she didn’t need the butterflies — just the security.

5. Ramp Up The Conflict And Tension

Austen’s recipe for a great novel always included conflict and tension. In fact, Smith calls her “very good at making dreadful things happen or almost happen to her characters.” The stakes are always high, whether the characters are at risk of losing their inheritance, position in society, or true love.

6. Progress Your Plot At All Times

You have a story to tell, and every page of your book should serve the purpose of furthering your plot. Austen was extremely clever about doing this. Going back to the example of Pride and Prejudice, not only did Charlotte Lucas offer another way of looking at marriage, she provided a reason for Elizabeth to be reunited with Mr. Darcy after he’d left Longbourn.

Small details can play key roles in a story when used well. Not surprisingly, this is another skill Austen had down. Smith gives multiple examples, one being the two chains Fanny Price received for her amber cross in Mansfield Park . One was from her love interest, Edmund Bertram, and the other came from her unwanted suitor, Henry Crawford (via his sister, Mary). Appropriately, only the one from Edmund fit the cross. That’s love.

8. Make Sure Your Dialogue Is Sharp

Good dialogue has to sound natural. Admittedly, Austen’s dialogue sounds a little different to 21st century ears, but it works for its time. Yours should too, so Smith recommends reading your characters’ lines out loud.

9. Sprinkle In Some Humor

Humor is rarely a bad thing; Austen was certainly a fan. In letters offering her niece Anna writing help, Smith shares, Austen spoke highly of the lighthearted moments. Any Janeite can vouch for her putting such moments in her own work as well.

Much as you may enjoy writing, we all know it’s not pleasant 100 percent of the time. Smith reminds readers to have fun with the process and not to put too much pressure on themselves to become an overnight success. As she points out, Austen kept working at it for over 20 years. Luckily, it was worth the wait.