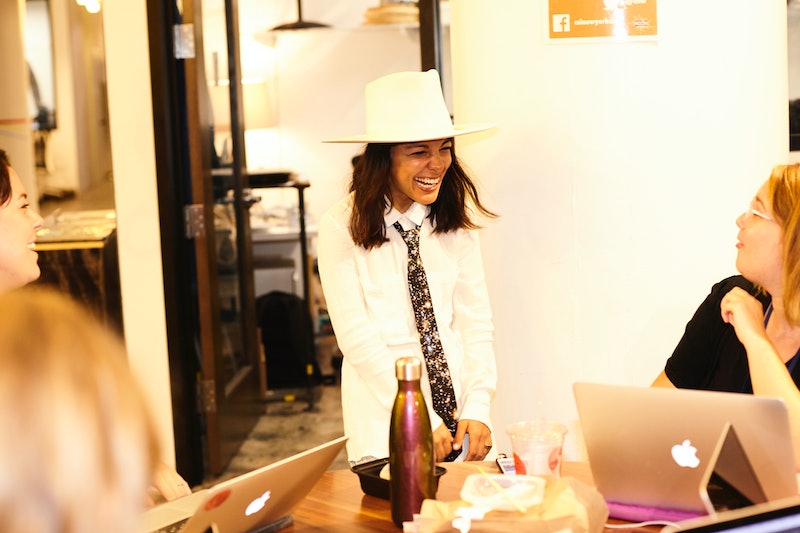 With her big hats and even bigger personality, it's hard to believe THINX CEO and cofounder Miki Agrawal ever had a boring office job — much less one in investment banking. "It was the funniest experience of my life because I was just like, 'What are these people? I don't belong here,'" Agrawal tells Bustle. "I was just so, like, the Not-Banker-Person and everyone was out-hard-coring each other, saying, 'I pulled five all-nighters this week, how many did you pull?' It was the worst culture, the worst shit-talkey, back-stabby ... ugh. Just about kissing ass and making money and there was just no mission, no heartbeat." But she stayed for two years — it was her first job out of college. Her dad had taught her to be frugal, and she didn't want to be broke in New York City. And then, 9/11 happened.

"My subway stop every morning was to World Trade Center. When 9/11 happened, I was supposed to be there. On that day, two people in my office died, and I slept through my alarm clock — the only day in my life that's happened. It was that wake-up call for me. I was like, I need to pursue my dreams now, and not later, not 10 years from now, now, 'cause I could die tomorrow. I quit."

She left immediately — and went to play professional soccer for the New York Magic for two seasons ... like you do. Oh, and then she went to work in the film business for a couple years, and then she opened her gluten-free restaurant, Wild, in New York City in 2005. It was the first gluten-free pizza joint with vegan options, making it ahead of the curve (a common theme in all of Agrawal's business pursuits).

"My favorite saying is that necessity is the mother of invention. Everything starts with a problem that you have. I had a problem with gluten, [so I thought] ... can we take this beloved comfort food and turn it on its head, and use gluten free flours, hormone-free cheeses, local seasonal toppings, no sugar in our sauce? And the answer was resoundingly yes. It can absolutely be done." While running her business, which had expanded into three restaurants, she got the idea for what would become THINX.

She was so busy running Wild that she kept forgetting to change her tampon and would have to go home in the middle of the day to change whenever it leaked. "It would be the most uncomfortable interruption of my day, having to run home and clean up the mess. It was embarrassing," Agrawal says. But when she looked at the marketplace for an answer, she found that even though the feminine hygiene category is a $15 billion dollar industry, no one was really innovating a solution — she believes because periods are still taboo.

"The word 'taboo' actually stems from Polynesian root word 'tapua,' and tapua means 'menstruation.' So the most uncomfortable thing we could possibly talk about is the thing that creates human life? Are you kidding me right now? And so it was just a holy shit moment, like we are wrapped in this patriarchal society and should be honoring that time of the month that actually creates life, instead of making women feel so ashamed."

So she went to work, and spent almost three and a half years developing the first period underwear product — all on a shoestring budget, with no investors. She was working with her twin sister, Radha Agrawal, and their friend, Antonia Dunbar.

"It was really very much a game of Sherlock Holmes. It's like, OK, we know the underwear has to do a few things. First of all, it has to look and feel like a regular pair of underwear. I don't want to feel like I'm wearing a bulky Granny panty with a pad built in, right? They had to feel like a sexy pair of underwear that my boyfriend could see and I would feel sexy in it," Agrawal says. She also knew that when you bled into the period panties, they couldn't feel wet in any way, or smell like you were sitting in blood. The underwear had to be so absorbent that it could last you comfortably the whole day, but also made of a breathable-enough material that it didn't provide a breeding ground for yeast infections.

It wasn't easy — they had to call textile technology company after company, and none of them had developed any anti-microbial technology that was safe and effective for period underwear. Finally, they found the right scientist to work with, who sent along fabric swatches they would then send to a seamstress to make test pairs. They'd try them out on their periods— not only wearing but washing them. If they shrank or changed shape, they'd have to start all over again. At this point, Agrawal was two years in.

At the same time, Agrawal was still working on her restaurants, which helped pay the bills — but not enough to bankroll all the research. Money was tight, but Agrawal's father had taught her to be frugal. "Even in my first year as an entrepreneur making $30,000 a year, I was able to save $10,000 because I learned so hard how to save and how to budget and still enjoy a night out," she says.

Once Agrawal and her co-founders felt they finally had a good prototype, they launched their Kickstarter campaign, along with an Indigogo campaign. They'd raised about $130,000 at that point — none of which came from professional investors. Finally, they raised an angel round of investment from friends and family. No amount was too small, and by compiling together all those small investments, they were able to get the patent process going, and bring on their first employee. THINX officially launched in January of 2014, and the company ended up going viral twice; once with their relaunch on Menstrual Hygiene Day in 2015, and again in October 2015, when they alleged that the MTA was trying to prevent THINX ads from going up on the subway.

She and her team created the "10 Big THINX," the company's core values. Some of the values include, "Share Your Sandwich," "The Menstrual Cup Is Half-Full," "Take Leaks of Faith," and, "Be Unbelievably Fridge-Worthy," (aka make work that deserves to be hung up on the fridge). THINX is into wordplay, in case you can't tell.

The MTA drama started when THINX's director of marketing, Veronica del Rosario, said she'd been going back and forth with an agent at Outfront Media, the company which approves most of the copy and images for review before the MTA board, for weeks — and was convinced they were being censored.

"When we said the text would read 'Underwear for Women With Periods,' the agent said, 'We won't be able to run the copy as is,' we could only assume that meant they didn't want us to use the word period," Del Rosario told Bustle at the time. Del Rosario said he also took issue with the word 'fluid,' as well as the pictures of the grapefruit (meant to symbolize the vagina). "He said they were too suggestive ... as were the women in their underwear."

Even though the MTA and Outfront Media commented that the concern over the word 'period' was brought up by an Outfront representative before THINX had officially submitted the copy for the ad — and before the MTA or Outfront Media had formally had a chance to actually review or reject it — they'd had already leaked the story to the press, and the narrative that the MTA was trying to prevent their ads from going up went viral. In New York City, the company was getting the best feminist publicity money can't buy. That THINX ads featuring grapefruits might be rejected — while subway ads using grapefruits to symbolize breast augmentation were everywhere — was an outrage. The controversy made THINX's target market — millennial, feminist women — already aligned with the brand. "We were gonna send the MTA a basket of grapefruits as a thank-you," Agrawal says.

As THINX began to explode as a business, Agrawal was faced with a new challenge as CEO. How could she allow her company to grow without losing sight of her mission of breaking taboos and empowerment? She and her team created the "10 Big THINX," the company's core values. Some of the values include, "Share Your Sandwich," "The Menstrual Cup Is Half-Full," "Take Leaks of Faith," and, "Be Unbelievably Fridge-Worthy," (aka make work that deserves to be hung up on the fridge). THINX is into wordplay, in case you can't tell.

Agrawal was also seeing a life coach, and decided to bring some of what she was learning to her company — especially when it came to open and honest communication. She didn't want her office to become just another boring business.

"I think it starts with the leader being super vulnerable. I cry in the office when I'm super upset. I say I'm sorry when I am. We just all talk openly. We're basically mostly girls at the company," Agrawal says. "Everyone's just really open with our feelings and if we're feeling something, we just have a conversation about it."

Her strategy appears to be working — not only has THINX continued to grow (they're a private business and don't share exact figures about their profits), but Agrawal has also launched two spin-off brands, Icon (a panty "for women who tinkle" — aka incontinence) and Tushy, a bidet attachment for toilets.

You'd think she's just some sort of start-up savant, but Agrawal disagrees, and believes everyone can do what she's done. She says it all comes down to two things: being willing to take that initial risk, and budgeting. Agrawal suggests that if you want to start a business, you need to have enough money for six months of living expenses while you get started.

"Once you have six months of savings, then I say take that leap. If you're excellent at your job — which I expect everyone who takes that leap to be excellent at what they do because otherwise they won't be good entrepreneurs — then you go for it." Hopefully, you've built your business plan and have started fundraising by the time you take that leap, but by the time you have two months of savings left, Agrawal says you need to gauge how far you've gotten. If you've raised enough money for your business, you can keep going. If not, you have two months to find a job and get back to building your savings up so you can try again next time. Because while Agrawal is in favor of being brave, she is against being reckless. She cautions that you should never go into massive debt to start a business, or refuse to give an idea up that isn't working simply because of your ego.

"This society that we live in is all about, 'if you fail, you're a loser.' No — fail forward. It's amazing. You took that chance, you were in the ring. We need to champion people who get out there and put themselves out there ... we need to champion people who take a leap and not tell people to stay in their safe jobs. We have one very short life to live. We really do. It's like holy shit, we're alive. We're so lucky to be alive right now, let's make the absolute most of it. But let's not do it in a way that makes us destitute."