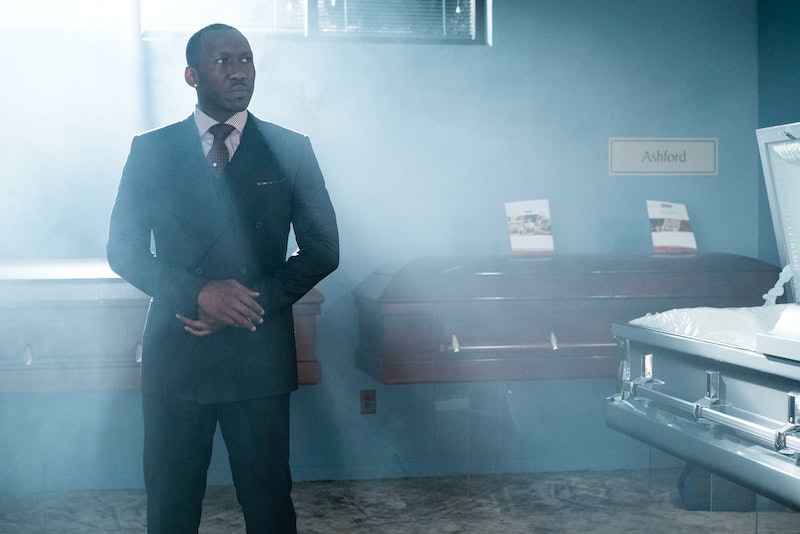 What is a hero without a villain to oppose him? It's a chicken-or-the-egg kind of question — and one that hangs over the entire Marvel Cinematic Universe, as the wildly popular comic book franchise has succeeded in spite of a dearth of compelling antagonists. While the MCU's feature films struggle to come up with a villain strong enough to follow in the footsteps of Tom Hiddleston's Loki, Netflix has already provided audiences with one: David Tennant's Kilgrave, who terrorized us through Season 1 of Jessica Jones. And now Netflix could be bringing us their next great Big Bad in Mahershala Ali's Luke Cage character Cottonmouth. But who is Cottonmouth exactly, and what can viewers expect from him when the show debuts this Friday?

Cornell Cottonmouth may not have the name recognition of other Marvel supervillains like Doctor Doom or the Green Goblin… and there's good reason for that, since he's a minor figure even in Luke Cage's long and storied comic book history. He was introduced in 1974, a couple of years into Cage's run, as a crime boss who ran the heroin trade in Harlem. When Cage and his best friend Willis Stryker (aka Diamondback) both fell for the same girl, Stryker framed Cage by stealing drugs from Cottonmouth and planting them in Cage's apartment, resulting in his arrest and imprisonment. After Cage was released, he infiltrated Cottonmouth's criminal organization in an effort to clear his name; when he was unable to do so, he simply turned Cottonmouth over to the police.

The villain wouldn't reappear for over three decades; he resurfaced for another brief run in 2010, having served his sentence and now joined a mob called The Rivals. In his first run-in with Cage in this new incarnation, the hero knocked out his enemy's teeth… and Cottonmouth had them replaced with pointed steel coated in pure gold. Ultimately, Luke Cage defeated Cottonmouth once and for all with the help of Iron Fist — who promptly knocked out all of the villain's shiny new chompers once again.

It's unclear what exactly was behind the decision to make this obscure character the focal point of Luke Cage Season 1, but there are plenty of reasons to be excited that they did. First of all, the Cottonmouth's significance seems to have been greatly expanded; not only because he'll be providing Cage with 13 episodes worth of conflict (at least), but because Marvel Television head Jeph Loeb has described the character as, not a villain, but rather the "other hero of the story," as he said at the show's San Diego Comic Con panel back in July.

Secondly, there's Cottonmouth's portrayer, actor Mahershala Ali. An Emmy nominee this year for his performance as Remy Danton on Netflix's House Of Cards, Ali has also been at the center of some very strong Oscar buzz this awards season for his supporting role in the acclaimed indie drama Moonlight. (You may also know him as Boggs from The Hunger Games: Mockingjay — Part 1 and Part 2.)

Ali himself described Cottonmouth as "a Godfather-type villain" in an interview with USA Today — an intriguing description indeed — and told Deadline that the character is, "really not a quote-unquote 'bad guy.' It's just being able to work against how those characters are often thought of, and sometimes written, to make them human; and therefore, making a character that the audience feels conflicted about." It sounds like Ali has crafted up a complex and compelling portrayal for us to enjoy.

Personally, I can't wait to watch him chew the scenery… ideally with the help of some golden fangs.