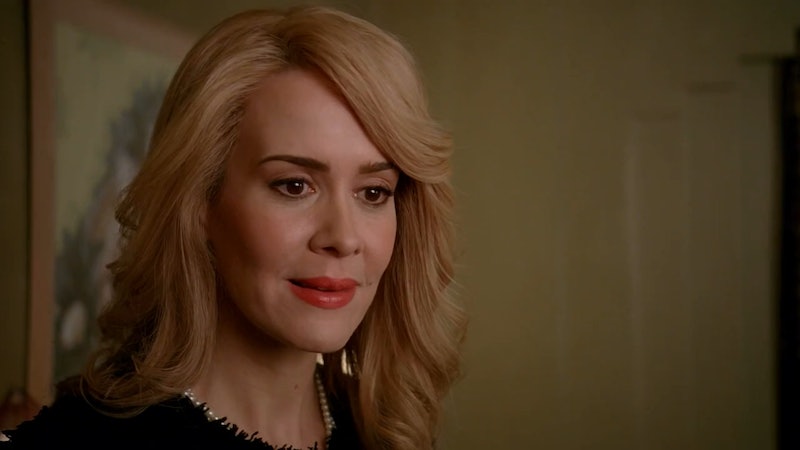 When it comes to any given season of American Horror Story, nothing is ever really quite as it seems. However, Season 6 has really kicked the mystery element up a notch by introducing two separate parallel journeys: one involving the real Matt and Shelby and the other representing their true-crime TV counterparts. But what if there's much more to it than that. Many diehard fans have been noticing some very prominent connections between AHS: Roanoke and Murder House from Season 1, particularly when it comes to the character of Billie Dean Howard. In fact, the medium even mentioned Roanoke by name when she was helping Violet attempt to banish spirits from the house. Is this because she's just really up on ghost history or is it possible that Billie Dean Howard is actually the real Shelby from the story?

Now, I know what you're thinking: "How is that even possible when we've been watching the real Shelby describe all of the horrific events that happened to her?" And while that's a fair point, Reddit user mansonfamily points out that this entire docu-series could actually end up being part of Billie Dean Howard's TV show. Back during her time on Murder House, Billie Dean mentioned that she was in the process of filming a Lifetime series, which we later caught a glimpse of firsthand when she reappeared on Hotel in the hopes of making contact with the Ten Commandments Killer. So what if the story of Roanoke is yet another segment of her reality series?

So how does this explain Billie Dean's personal involvement with Roanoke? Reddit user ellewoodswannabe16 takes the theory one step further by suggesting that the reason Billie Dean knew so much about the lost Roanoke colony and banishing spirits was due to the fact that she herself used to live in that area. Perhaps that's even where she originally discovered her psychic gift and decided to change her name from Shelby as a way to help distance herself from everything that happened to her.

And there's no denying that Billie Dean and Shelby look alike, considering they were played by the same actress, Sarah Paulson. So maybe those true-crime scenes are actually flashbacks of her remembering what happened and the real actors are actually the ones being interviewed. It would be a way for Billie Dean to tell her story without revealing her true identity. Ryan Murphy recently promised Entertainment Weekly that a big twist was coming in the middle of the season and that "you’ll see starting in episode 6, the show has a huge turn and the thing that you think you’re watching is not what you’re watching." This theory could very well be what he's referring to and prove that Billie Dean's connection into the AHS-verse goes far deeper than we ever realized.