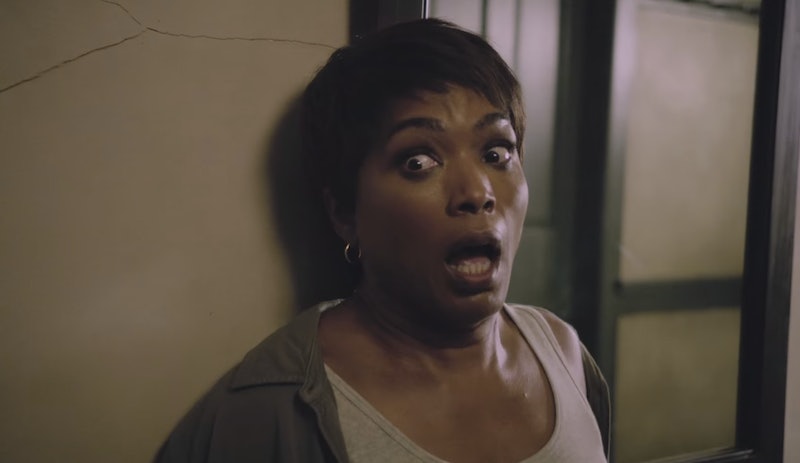 Since the previous five seasons of American Horror Story have truly shown that anything could happen — and I mean anything — some of these fan theories (mostly from reddit users) seem strangely prescient for Season 6 being only one episode in. On the other hand, some theories seem premature considering the series has not given viewers a ton of information. But regardless if some of these hypotheses seem really impressive or are too soon to tell, part of me always hopes that Murphy and crew will have come up with something that no fans could see coming to keep viewers in suspense. Because what's the allure of knowing what the entire Season 6 is going to be about right off the bat?

Whether or not they prove to be true, here are 11 of the best (and kookiest) theories about Season 6 of American Horror Story . Because what's actually going to happen this season isn't necessarily the point — it's just fun to look for clues of where Murphy's crazy roller coaster ride is going to take viewers this season.

1. It's Not About Roanoke At All

Reddit user SolarMechanic wrote that the Roanoke theme is probably an intentional lie and that this season's focus isn't going to really be about the lost colony. What SolarMechanic and other redditors think the season will be about is what the reenactment actors are experiencing in their real lives — on and off set. And don't worry, it would keep it's horror genre since the cast would be getting terrorized while they film the reenactments.

When American Horror Story premiered on Sept. 14, I was taken aback by the true crime setup with "real" interviews and reenactments. While it's slightly amusing currently, there's a way the series could elevate this tactic — by actually tricking the viewers about who the "real" people are and who the reenactment actors are. From the first episode, you're supposed to believe Lily Rabe is the real Shelby who experienced the terrors and that Sarah Paulson is the actress portraying Shelby — but what if it is actually the other way around? Rabe's Shelby seemed notably insincere and since Season 5 had a big twist with the 10 Commandments killer, Season 6 could be following in its footsteps.

3. The Real People & Actors Meet Up

The actor who plays "actor" Matt gave some credence to the theory that the actors and real people could meet up when Vanity Fair asked Cuba Gooding Jr. if he ever got to interact with his Matt counterpart, actor André Holland, on the series. Gooding said with a grin, "Well, I can’t continue this line of talking. If I continue this line of talking, I might give something away." Not only does this make me think that they will meet up, it also makes me think that the "real" people are potentially playing the reenactment actors like puppets.

4. The Reenactment Actors Are The Real People & They're Dead

Many more theories about the documentary/true crime plot have been discussed by fans, but I promise this is the last one on this list. If you were disappointed that you don't have to fear for Gooding and Paulson's safety since their "real-life" counterparts are narrating what happened, there's a theory to explain that away. Two redditors — goldencolossus and gnrwarrior — both theorized about this separately, but the gist is that Rabe and Holland are the actors, providing narration to what happened to Paulson and Gooding, two people who already have died.

The first episode of Season 6 had a big focus on pigs and since all of the seasons of American Horror Story are connected, one idea is that the pig is a nod to the Piggy Man from AHS Season 1 (pictured above). If you need a refresher, Eric Stonestreet's Derrick went to therapy with Dylan McDermott's Ben and confessed his fear of the urban legend of a pig butcher who wore a dead pig's face as a mask when he slaughtered the animals. He slipped one day and the pigs ate him to death. Later in the episode, Derrick tries to conquer his fear by summoning Piggy Man in the bathroom mirror and is murdered. According to AHS folklore, the myth of Piggy Man originates in Chicago in 1893, so I'm not sure how this could all tie in with Roanoke, but never underestimate Murphy and his writers.

While I thought it made sense that Shelby would lose her baby due to the stress of her husband being attacked, a redditor has a different theory — that Shelby is a witch and she sacrificed their baby's life to save Matt. SweetBaconTater acknowledges that it's not clear if Shelby did this intentionally or not, but it's a power that was first introduced in Season 3's Coven as Vitalum Vitalis, which swaps one life force for another. I looked more at the loss of Shelby's child as a connection to murder house since it prompted a move to a house that is clearly no good, but Shelby being a witch is a much more intriguing prospect.

Nothing is too bizarre in the world of American Horror Story and user AmericanDragStory on reddit thinks that the aliens from Season 2's Asylum might be making a comeback in Season 6, thanks to a screenshot from the Season 6 preview (the first photo above). It's based on the way the alien's forehead looked in Season 2 (the second photo above), but I think it's a stretch since the screen grab from the trailer looks very much like a tree that's shown later. However, since some people believe aliens are the reason for the disappearance of the Roanoke colonists, it's not completely out of the question.

8. And We Know The Aliens' Identities

Think the alien theory is too out there? Well, reddit users came up with some pretty worthwhile ways that the alien element could become a reality. One theory is Rabe's character is an alien, with reddit user wwfmike noting, "She keeps saying 'humans act this way' or humans do this.'" This theory is supported by jeeco who wrote that Paulson and Gooding's characters could get abducted by the same aliens that abducted the Roanoke colonists. Jeeco wrote, "The aliens then take their likeness and assimilate into human culture," and with this scenario, I like to think means that Rabe and Holland are aliens pretending to be Shelby and Matt.

Gooding's character keeps saying that the country neighbors who wanted to buy the house are attacking them because they are racist, but what if these presumed racists are actually the good guys? Reddit user MG87 thinks that these unfriendly neighbors were actually trying to warn the new residents of this house. Since some people think there is a ghost that is messing with the items in Shelby and Matt's house, redditor omjezus also thought the scary mob of neighbors was good and trying to make the spirits go away.

How about a little time travel theory? The ground shook when Paulson's Shelby fell in the woods during the premiere episode, so reddit user Jhudson1525 proposed that Paulson was going back in time in that moment. It definitely would explain how Season 6 is going to become My Roanoke Nightmare if Shelby finds herself in the 1500s.

Oh, did I say I was finished with the documentary theories? Well, my apologies because there is one more that's worth your consideration. Reddit user mansonfamily came up with the super meta theory that My Roanoke Nightmare, with its interview and reenactments, is actually a television show from the medium Billie Dean Howard. Not only would this reoccuring character appearing again give Paulson a juicier part, My Roanoke Nightmare sure has the sensationalism that is a trademark of Billie Dean.

While some American Horror Story theories are so clever that I'd love to see them play out on-screen, the other part of me wants to be totally surprised by what Murphy has in store for Season 6. Either way, based on the first episode, I'm confident that My Roanoke Story is going to be shocking no matter what.

More like this
6 Mind-Blowing Fan Theories About How Stranger Things Will End
By Kadin Burnett
'Line Of Duty's Writer Just Dropped A Bombshell About Steve & Kate
By Catharina Cheung
Who Is 'Umbrella Academy' Star Elliot Page Dating After His Divorce?
By Jake Viswanath
Why Sadie Sink Is Hopeful Max Will Return In Stranger Things Season 5
By Brad Witter
Get Even More From Bustle — Sign Up For The Newsletter