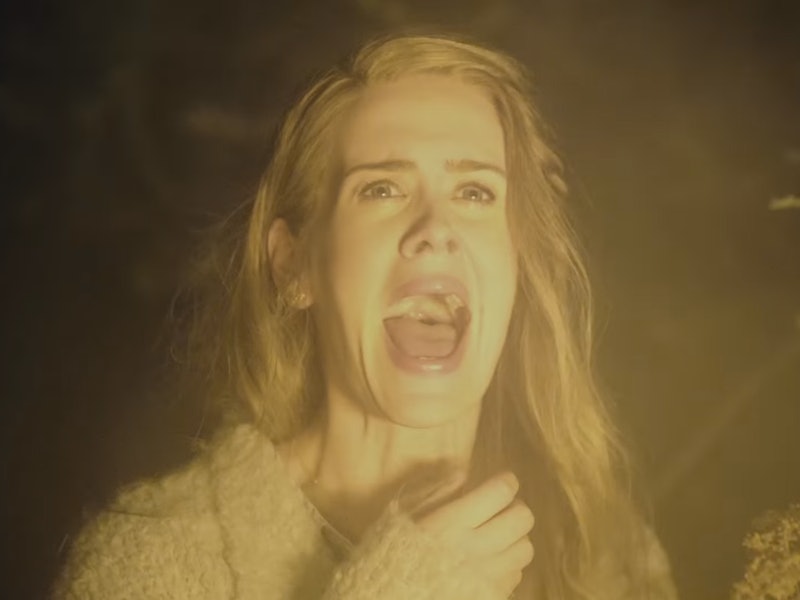 Murphy was featured in the Sept. 30 edition of Entertainment Weekly and the magazine got some insight on the top-secret American Horror Story Season 6. The showrunner admitted to EW that halfway through this season, there will be a major twist. "You'll see starting in Episode 6, the show has a huge turn and the thing that you think you're watching is not what you're watching," Murphy said. While he could be messing with fans (it wouldn't be unheard of), I'm inclined to believe Murphy and with this knowledge, I anticipate that AHS: Roanoke will really begin to tie into the rest of the anthology as this season progresses. So keep going with those Billie Dean Howard theories, my fellow AHS freaks!

Yet while viewers can talk ad nauseum about the similar camera shots, actors, and general (and direct) themes that Roanoke shares with its predecessors, I wanted to take a look at the AHS Season 6 connections that don't rely on speculation. Although there aren't many, here are some of the more concrete connections that Roanoke has to the rest of American Horror Story so far.

While some fans may crave a Billie Dean cameo, she'll be connected to Roanoke even if she doesn't make a direct appearance, thanks to something she said in Murder House. The medium told Violet that the most successful banishing of spirits she had ever seen was in Roanoke when the dead colonists' spirits were haunting the native tribes and the elder banished them forever with a curse. Obviously, the spirits are still kicking around since they appear to be haunting Shelby, Matt, and Lee, so you gotta hope that this Season 1 connection will end up being more meaningful with either Shelby actually being Billie Dean or My Roanoke Nightmare being Billie Dean's show.

In that Entertainment Weekly cover story, Murphy said that in Roanoke, "We explain how the Motts began which is funny." As no one who watched Season 4's Freak Show can ever forget, the super dysfunctional and very wealthy mother-son team of Gloria and Dandy Mott lived in Jupiter, Florida in the 1950s. Since these characters were truly fascinating (as well as truly twisted), their family history is going to be severely entertaining. Plus, that should mean the return of Finn Wittrock (who was expected to return this season), but also Frances Conroy.

One of the first connections fans noticed between Roanoke and Season 1 all had to do with a pig. A pig creature was heard squealing outside of Matt and Shelby's house and then an image of a "Pigman" was seen in a video. An episode of Murder House was dedicated to the legend of Piggy Man, which terrorized Eric Stonestreet's character, so the theory is that this pig figure in Roanoke is the same Piggy Man from Murder House. While this is a popular fan theory and hasn't been confirmed by Murphy, EW backed it up in its article about the AHS creator by writing, "Fans have wondered how Roanoke will tie to others, and we've already seen Piggy Man — a call back to Murder House." Although that doesn't necessarily make this theory 100 percent true, you can't deny that Roanoke seems to be borrowing this man-pig hybrid from Murder House.

While the official list of connections to other American Horror Story seasons isn't very robust right now, once the twist that Murphy teased comes about, I'm certain that Roanoke will show just how much shared mythology it has with the rest of AHS. Until then, have fun continuing conjecturing connections — it's what Billie Dean would want you to do.

More like this
The Kenan & Kel Reunion On SNL Took A Dramatic Turn, Thanks To Keke Palmer
By Brad Witter
Keke Palmer Just Announced She's “Going To Be A Mom” On SNL
By Brad Witter
This 'White Lotus' Symbol Could Hint At A Major Character's Death
By Grace Wehniainen
The 'Firefly Lane' Book Ending Teases Way More Tears To Come In 2023
By K.W. Colyard
Get Even More From Bustle — Sign Up For The Newsletter