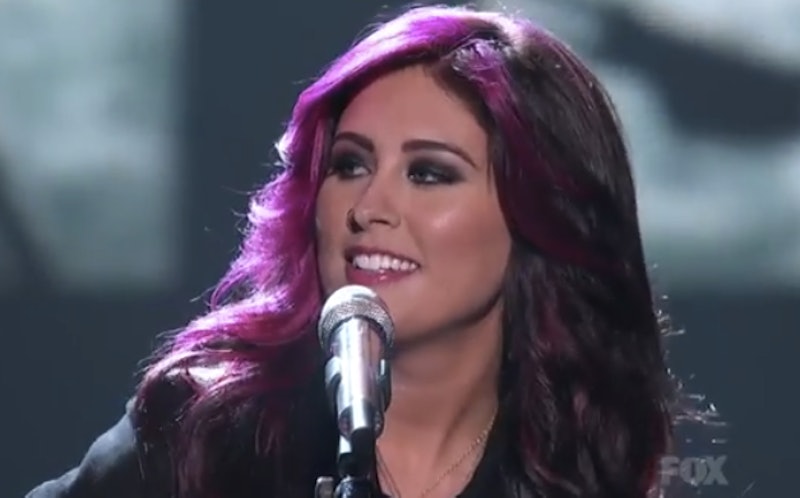 Between Wednesday night's predictable song choices, lackluster performances, and pitch problems, it seemed like the evening of singing from American Idol's top 10 contestants couldn't get any worse—until Jessica Meuse took the stage. As per the evening's theme of Billboard hit songs, Meuse chose to sing Foster the People's "Pumped Up Kicks." However, her cheerful performance of the emotionally-charged song made everyone a bit uncomfortable—including judge Harry Connick Jr.

The tune "Pumped Up Kicks" rose to the top of the charts because of its interesting fast-paced beat, which also tends to disguise the meaning of the lyrics for listeners. While the song may initially seem cheerful, it also disguises a set of emotionally-charged lyrics. The song describes a teenager in a sea of homicidal thoughts.

"I wrote 'Pumped Up Kicks' when I began to read about the growing trend in teenage mental illness. I wanted to understand the psychology behind it because it was foreign to me," the band's frontman, Mark Foster, told CNN. "It was terrifying how mental illness among youth had skyrocketed in the last decade. I was scared to see where the pattern was headed if we didn't start changing the way we were bringing up the next generation."

However, when Meuse took the Idol stage to sing the hit, she creepily smiled throughout the entire performance. Her appearance did not go unnoticed—Harry Connick Jr. immediately commented on her inappropriate disposition when it came time for him to give his comments, asking Jessica plainly: why were you smiling?

Her response was less than explanatory, citing the band's clever union of opposing melody and lyrics for her smiles. Still, Connick begged for more and varying emotions from Meuse, who has remained rather stoic since day 1 of the competition.

However, judges Keith Urban and Jennifer Lopez leaped to Meuse's defense, saying that the upbeat melody allowed for a happier performance than what the lyrics stood for.

We're team Harry on this one all the way. While we understand that the song is upbeat, it was discomforting to watch a singer smile through a serious song like this one, especially during an 8 p.m. show when young children and teenagers are watching and absorbing everything that is going on. If Meuse smiles through a song about homicide, that simply sends the wrong message to viewers everywhere.

Furthermore, one of the major issues of all of the contestants this year, especially Meuse, has been their inability to visibly connect with the songs they sing each week. Most of the contestants stand their doe-eyed, unattached, and unaffected by the lyrics they are singing into the microphone. Ultimately, it's not fun or pleasant to watch and it proves to be just another reason to turn the show off altogether.