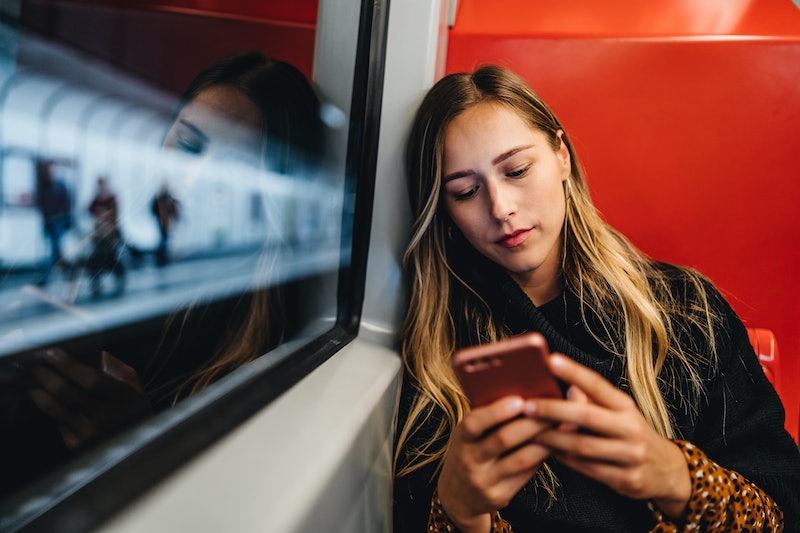 With news that an unknown group in London is distributing badges reading "Tube Chat?" to people on the city's "tube" underground train line to foster conversation, it's time to wonder: why don't we talk to strangers more habitually? Is it a product of our fear-centric modern culture, a result of our reliance on mobile phones and other distracting devices that's taken away from the power of a chance encounter with an unknown person — or does our aversion to strangers have deeper scientific roots? How we react to strangers is actually the subject of several interesting theories about human origins, childhood psychological development, and empathy; and it doesn't seem that our dislike of random, unwelcome conversations with unknown people is just an etiquette breach.

Most strangers are deeply benign. As somebody with social anxiety disorder, who last week drank an entire pot of black tea rather than telling the waitress (a stranger) that I was meant to have green, this is something I forget quite a lot. Despite this, acts of kindness and altruism between people with no connection, from charitable giving to saving lives on the street, tend to make big impacts in the news, because we've generally been conditioned to believe that strangers are a bad idea and should be avoided at all costs. Whether the "Tube Chat" plot will work (particularly among the habitually reserved English) remains an open question; but if it doesn't, there's likely more at play than just tight-lipped British people refusing to break social decorum.

Some parts of our psychology seem to have an evolutionary basis — they carry over lessons learned throughout the evolution of the species, tactics that guaranteed the survival of certain people over others and were thus seemed to be valuable traits. And fear of strangers, it seems, is one of those. Humans have spent a large part of their history in small groups, sharing resources and protection; in that context, an outsider is a valid threat. Examinations of primate psychology have borne this theory out: in primate species that keep to small, protective groups, infants show huge fear of strangers early on; conversely, in primate species where babies are regularly handed out to "strange" adults as a matter of course, they're more chilled out. (Fear of strangers is much more pronounced among small orangutans and other primates who see basically nobody except their mothers for the first few years of their lives.)

Studies have shown that the fear of strangers is common across most, if not all, human cultures; and the fear of strangers isn't an idle one in many animal species. In some primates, infants who aren't under the protection of the dominant male are likely to be killed, and species that operate in extreme closeness, like rhesus monkeys, also kill outsiders of any age. Perhaps most interestingly: human children have been shown to be a lot more scared of male strangers than female ones, even if they've had nothing indicate to them that males are more dangerous — which suggests that fear of strange dudes has been a good evolutionary strategy in the past.

I've talked a bit about attachment theory in the past; it's the normal way in which children develop their sense of safety and proximity to their parents (their mothers in particular), and getting it wrong can mean that their ability to handle relationships or trust in the future will be handicapped. And it turns out that stranger-fear is a key part of development when you're a young kid.

Human babies start to be worried and upset about strangers at roughly five to eight months, when they're first able to clearly distinguish strangers from their parents and hear massive danger signals in their baby-brains. This system of stranger danger fear is actually a way in which some developmental psychologists test children's relationships with their mother, using something called the "strange situation," invented by the psychologist Mary Ainsworth.

In the "strange situation," an infant is playing with his or her mother when a stranger comes in; the mother leaves them alone with the stranger for a while, then returns. The child is then left alone, then with the stranger again, and then again reunited with the mother. Depending on how happily, securely "attached" to their mother the child is, they might get a bit upset when the mother goes away and be happy when she returns (which is normal) — or they might be incredibly upset when she goes away and difficult to console, or not appear to care at all, both of which are signs of a problem.

Our Stress Levels Rise Around Strangers, Which Makes Us Less Feel Empathetic

A 2015 study found that being around strangers actually raises our levels of cortisol, a hormone that produces stress responses, which had an unusual consequence: it makes us less empathetic. This is likely a hangover from evolutionary stranger-danger, and makes us even less interested in hearing a stranger's problems on our train ride home.

A set of corresponding studies on the topic were done in mice and humans: in the first, pairs of mice (strangers and familiar ones) were put in cages and one of them was given an electric shock. If they were familiar, the un-affected mouse showed a lot more empathetic pain than if they were strangers; but if the scientists gave them a cortisol-blocker, they reacted in the same empathetic way around both familiar and unfamiliar mice. The same thing happened with humans who were put in pairs, with one person made to put their hands in iced water; cortisol levels "blocked" the participants' ability to feel as much empathy for a stranger's pain, while cortisol blockers helped them feel empathy for both strangers and familiar folks.

The interesting thing about this is that the cortisol-blocker actually seems to provide a solution for stranger-fear and the empathy problems it might cause. And, fascinatingly, the scientists also found that joint activities like board games did the same thing, reducing cortisol levels and helping the growth of empathy.

"Stranger danger" is a key part of children's safety education: stay away from people who might hurt or harm you, and stick close to those you know. (This lesson has just echoed across the media in the UK, where a schoolgirl was kidnapped and sexually assaulted in broad daylight by strangers while walking to school.) The idea that strangers are dangerous may be embedded in our genetic inheritance, but it's also been amplified by the media. Children on milk cartons, the fascination around the possible "mysterious stranger" in the JonBenet Ramsey case, and a public cultural emphasis on narratives of serial killers all contribute to the idea that strangers are fundamentally unknowable and deeply fearsome.

In terms of actual crime, though, the statistics often lean the other way. The Huffington Post points out that, in terms of violence, a fear of strangers is actually less realistic than a wariness regarding those close to you. The vast majority of sexual assault victims know their assaulters, and murder victims were three times more likely to be killed by somebody they know than a stranger. It's still very sensible to be aware of your surroundings when alone at night, but that prickling in your gut? It's likely been created as much by culture as by genetics.

As for people not talking to you on trains, that's as much a violation of social codes as it is a stranger-danger problem: we're not part of a culture that generally facilitates easy conversation between strangers, so people who break that rule look suspect and a bit worrying. If you're going to strike up a conversation with a stranger and they look at you askance, don't worry: you don't smell funny. You're just violating a cultural norm!