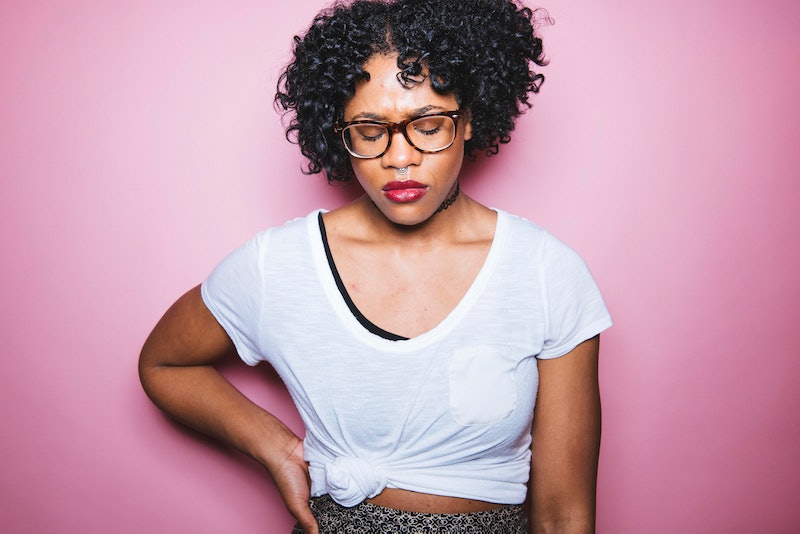 In an election between two presidential candidates who boast seriously low approval ratings, it's no wonder that the term "protest vote" is getting thrown around a lot. The issue of protest votes and millennial voters is particularly salient, as remarkably high numbers of millennial voters say they're planning on casting a protest vote for third-party candidates Gary Johnson or Jill Stein.

One thing that "protest voters" may not realize is this: Donald Trump could win the election if millennials don't vote for Hillary Clinton en masse. That's the main danger facing all of us, and in no presidential election literally ever have so many people from all across the spectrum been in such agreement that one candidate is actually a huge danger not only to the country, but also the rest of the world.

Foreign leaders say he's dangerous. Republican national security officials think he's dangerous. One of Germany's biggest news outlets called him "The World's Most Dangerous Man." USA Today weighed in on a presidential election for the first time in 34 years to tell people not to vote for Trump. That's the main reason not to cast a protest vote.

There are more reasons, though, so let's delve deeper. For one thing, millennials are a force to be reckoned with. We have the same strength in numbers that the baby boomers do; both generations represent about 30 percent of the potential voting pool. When we're talking about elections that are typically decided by only a single-digit margin, 30 percent is a huge number. And millennials can push a candidate far, as we saw with Bernie Sanders' unexpected rise throughout this election. We are also a highly progressive generation, which means that we are the main force for change in the country, as long as we use our votes to elect leaders who will actually enact progressive change.

But a protest vote in the system that we have accomplishes none of that, and it could have grave consequences.

Sanders fought hard and actually managed to push Clinton significantly to the left, and a lot of that was because of significant millennial support. All the Bernie Bros out there can congratulate yourselves for that — but you're not done yet. If you cast a protest vote for Gary Johnson, you're actually choosing a candidate whose platform is diametrically opposed to Sanders' brand of democratic socialism. Yes, they're both cool with gay rights and things like that, but Sanders rose to the top on his economic plan, and Johnson supports an economic plan that's much more in line with Mike Huckabee's ideas than with Sanders'.

Then again, maybe it wasn't Sanders that got you thinking about casting a protest vote. Maybe you just think that Trump and Clinton are both so terrible that you can't imagine voting for either one of them. Let's be very careful not to put them on the same level. Trump is an ignorant misogynist, a proven racist, and a bigot in so many ways — but you already knew that. And Clinton had the thing with the emails.

Clinton's positions have evolved, and they weren't always great at the beginning. She's lied a few times. But we all know that politicians lie — that's the whole reason we have fact-checking organizations. Between those lies, she's spent her life fighting for equality across the board. Even if you don't like Clinton, between her and Trump, you're choosing between an anchovy pizza when you don't love anchovies and a pizza that will give you violent food poisoning. Those two things are far from equivalent, so don't choose the one with the far worse impact.

If your deal is that you're really into third parties, that's great too. Our system could use a serious upgrade, and maybe we're the ones to do it. However, voting for a third-party presidential candidate is not the way to make that change. Vote for a third-party candidate in a race one of them could win — a local or state race, for example. Or even better, run for a local office as part of a third party yourself in the midterm elections. Either way, a party built from the bottom up is the only kind that could realistically hope to challenge the two parties for the presidency and gain a permanent place in the political system.

Your protest vote for a presidential candidate? It's definitely not going to get rid of the two-party system. You'd be falling into the same trap as voters did with Ross Perot in 1992 and Ralph Nader in 2000, just to name a few. And in a year that's making even some Democrats look back on George W. Bush with nostalgia, this is no year to tempt Nader's fate.

That's the thing about protest votes: In the best-case scenario, they accomplish nothing, which means that you've wasted the one vote that you have. But in the worst-case scenario, they create a monster. Look at the Brexit vote in June for a recent, telling example. Scores of people voted for the United Kingdom to leave the European Union simply as protest against some minor problem they had with EU bureaucracy, and it ended with a seriously regrettable result. They didn't think their votes mattered. They were sure "Remain" was safe. In the end, of course, there were so many of these protest votes that the "Leave" campaign won, sending the U.K. into a tailspin. The worst part of this? Millennials are the generation that's going to have to deal with this result for the longest, even though the older generations voted "leave" in greater numbers.

We cannot be the generation that hands the election to Trump because we didn't think about our votes enough.

Trump, of course, is what it really comes down to. When you're thinking about voting in November, there's only one question you need to ask yourself: Do you want Trump to win?

If the answer is yes, then vote for him. If the answer is no, then vote for Clinton. Like it or not, those are the only two people in the world who have the chance to become America's next president. If you vote for anyone besides Clinton, you might as well consider it a vote in Trump's pocket. In head-to-head contest, Clinton beats Trump by a fairly safe margin. When you include third-party candidates in the polls, her lead gets smaller. We know, then, that protest votes help Trump and hurt Clinton overall, because otherwise polling would reflect Clinton winning by more in a four-candidate race than in a two-candidate one.

This moment in the world is altogether too dangerous to take a risk or to throw your vote away on a protest that won't accomplish anything, or the dodge the democratic responsibility we all have to choose who governs us.

I'll say it again: Do you want Trump to be the next U.S. president? If not, then your only option is to vote for the one person who can stop him from getting there: Clinton.