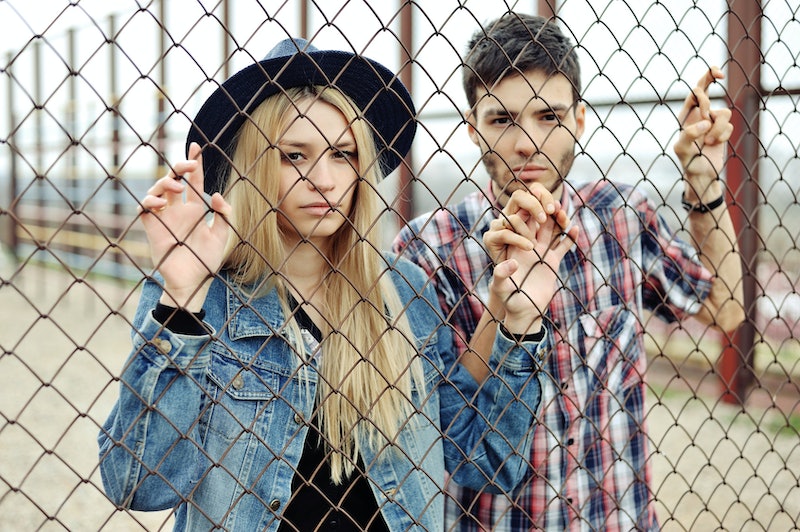 It's easy to think that when a relationship is over it will be obvious and that there will be a natural time to break up. But breaking up really is hard to do, and it can be totally normal to feel scared when it's that time. You may afraid of being by yourself, afraid of hurting your partner, or afraid that you're not going to find someone else. The problem is that none of those are a good enough reason to stay in a relationship that's gone wrong — or was never right to begin with.

I know sometimes it can be hard to tell if it's time to break up, but you need to be realistic. Just the fact that you have an inkling that you might want to end the relationship shows that something is amiss. "If you are even thinking this question, I would say that is red flag number one," Marina Sbrochi, IPPY award-winning author of Stop Looking for a Husband: Find the Love of Your Life , tells Bustle. And as scary as it might be, if you're just staying in a relationship out of fear, then it may be time to call it quits.

But how can you tell? How do you know when you're staying in a relationship just because you're scared? Here are five signs:

Nobody wants to hurt their partner's feelings, but sometimes it needs to happen. One good sign it's time to end it? "You know you don't want to be with them anymore, but feel like you're a bad person if you leave," life coach Kali Rogers tells Bustle. Remind yourself that as much as it might be difficult in the short term, it's better for them in a long run than being in a bad relationship.

Another sign that you want to breakup but feel awkward about it is that you've stopped acting relaxed with them. "Always break up with someone if you don't feel like yourself when you are with them," Rogers tells Bustle.

3. You're Having The Same Fight On Repeat

Deal-breakers are there for a reason. You're allowed to have them. If you find that you and your partner are having the same fights about big issues over and over and neither of you wants to budge, then it may be time to admit that it's just not working.

4. You're Avoiding Each Other

Sometimes, if you want to break up, you sort of hope that you can just fade out of the relationship — and one or both of you will start avoiding each other. "When a person stops having the time or desire to be with you, then you know that your relationship is on life support system, and that you might just have to be the one who has the guts to pull the plug," relationship coach and psychic medium Cindi Sansone-Braff, author of Why Good People Can't Leave Bad Relationships, tells Bustle.

5. You're Pretending To Be Over Something

Even if you line up on all your deal-breakers, sometimes something happens in a relationship that breaks it beyond repair. "If someone you are dating or involved in a long-term relationship with has betrayed you in a way that you cannot get past — cheating, lying, addiction — then it is time to end the relationship for your own emotional health," executive editor and founder of Cupid's Pulse Lori Bizzoco tells Bustle. "Remember, ending a relationship with someone is a personal decision and only you know what is healthy or unhealthy for you." If you really can't get over something, it's best to end it.

But if you're feeling scared and guilty, it can be difficult to actually go through with a breakup. Remember you're doing the right thing, and keep this in mind:

You don't have to be a d*ck when you dump someone, and remember it's actually kinder to just go and do it. "Don't drop out and ignore the person you are trying to end things with," relationship therapist Aimee Hartstein, LCSW tells Bustle. "Don't make them come after you to find out if you are still dating because you have been ghosting them for a week. Make a clear decision. Then be a grown-up and tell them that things aren't working out and that it's over. No good comes from doing a slow ignore and fade out. It's disrespectful to them and it's not a conscious, mindful way to be living your own life."

Relationships end sometimes. You need to remember that it's often not your fault or your partner's. People fall out of love or simply aren't right for each other anymore. "Some relationships just do not work out, and you have to be honest with yourself when things have crossed the point of no return." psychologist Nicole Martinez, who is the author of eight books, including The Reality of Relationships, tells Bustle. You don't need to look at it as a failed relationship, just a relationship that came to a natural conclusion.

If you keep being upset with yourself, you're not going to get over it. “Blaming yourself doesn’t change the outcome," dating expert and creator of Fantasy Dating, Suzanne Casamento tells Bustle. "Instead, blame acts like a giant anchor that prevents you from moving forward.” Remember that a relationship has two people at play.

Remember How Amazing Being Single Is

Even if you're someone who wants to be in a relationship, it's so much better to be single than in a relationship that doesn't make you happy. You get your own time and mental space back, a sense of independence, and a chance to figure out what you really want. Treat. Yo'. Self.

More like this
50 Valentine’s Day Instagram Captions To Post If You’re Single
By Jessica Booth, Lexi Inks and Carolyn Steber
5 Signs You Have A Toxic Relationship With Yourself
By Lexi Inks
My Partner Wants Me To Wear A Diaper During Sex. Help!
By Sophia Benoit
18 Hinge Prompt Answers To Try If You’re Looking For Something Casual
By Lexi Inks
Get Even More From Bustle — Sign Up For The Newsletter
From hair trends to relationship advice, our daily newsletter has everything you need to sound like a person who’s on TikTok, even if you aren’t.