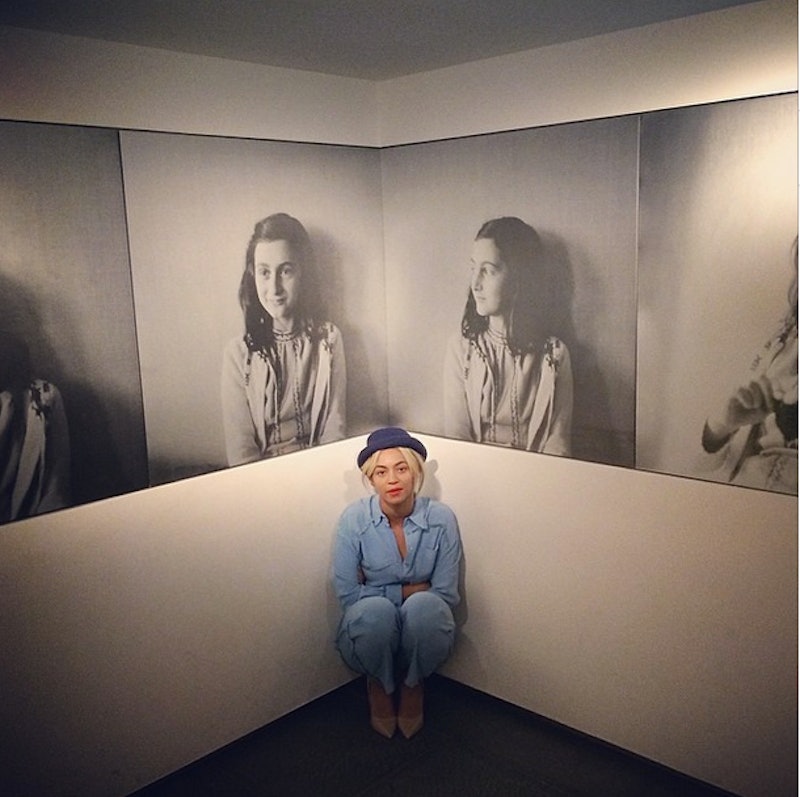 If you're visiting Amsterdam, there are some historical places that are particularly intriguing and if you're inclined to use social media, you may want to document the memories you make touring such important locations. But some places should be off limits. Like this, for example: Beyonce visited Anne Frank's house, and then Instagrammed it. Now you can find pictures of Beyonce sitting in a corner by Anne Frank's image. You can "like" it, too.

Which, let's just say it, is weird. Not that the singer visited the museum; it's an educational and emotionally harrowing experience to visit Anne Frank's house. What's weird is that she publicly documented her trip. In the image she Instagrammed, she's got a somber look on her face, and it's unclear if she's saying I identify with you, Anne Frank, or I feel the pain of this experience, I understand the trauma. If it's the latter, that's not something you put on the Internet for people to "like." That's an odd form of validation, and an indication that she might be slightly ignorant of the gravity of Anne Frank's house.

My feelings toward Anne Frank may very well be linked to my last name (you can infer my cultural identity by looking at my last name, it ends in "berg," although I coined myself a "bat quitzvah," as I dropped out of Hebrew school after that epic event) but what we're dealing with is territory that's far more solemn. The Holocaust is not something to be taken lightly; when one visits the Holocaust museum, for instance, one doesn't tweet about it. Or does one? "At the Holocaust museum. #history #sad4jews." That's self-indulgent. That's also just wrong. Visiting a museum or historical monument is not a moment of social or cultural charity on anybody's part, and that's what it appears to be when a celebrity posts such an image.

The images themselves, (which you can see below), make it seem as though Beyonce is trying to identify with Frank. Maybe solely an image of the guest book or something without the artist herself would make it seem more... sincere, but to pose with photos of a historical figure turns it into a Disney World moment. Taking a picture of the objects in the house themselves might have looked more genuine. There's something off about saying, "Internet. I'm B and I'm here with Anne Frank, may she rest in peace."

There's no dismissing that Bey and Jay Z's interest in commemorating Frank is noteworthy, and I must concede in that when a celebrity of note publicizes a trip to a place such as Anne Frank's house, it raises historical awareness. Yet do we want to raise awareness, by — dare I say it — Disneyfying a historical landmark?

But what may be to blame is that our vocabulary of "how to save a memory" is diminishing. We don't take pictures with cameras, we take them with phones, and it comes with the muscle memory to put a filter on it and share it to Instagram. What may have been a harmless attempt to show the world that she's attempting to understand parts of global history might have come off as ignorant — or as a badge of "look how good I am" — on a sheer account of our social media habits.

Between Justin Bieber's Anne Frank misstep and now this, maybe celebrities would be better off leaving Anne alone.