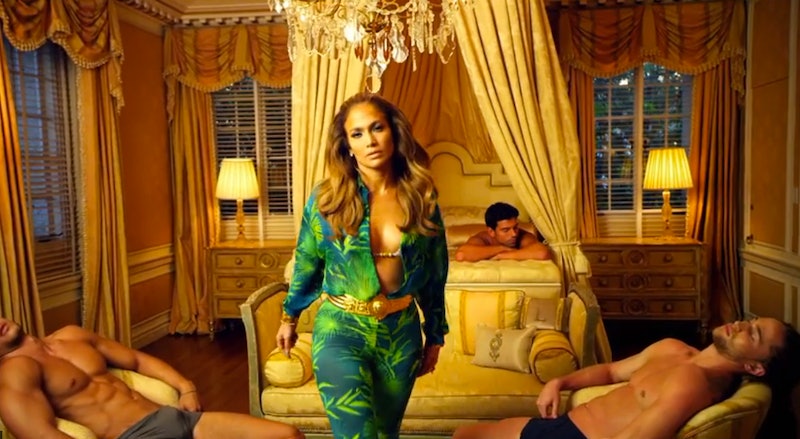 Jennifer Lopez' newest music video, for her new single "I Luh Ya Papi," is full of a lot of man-meat. I feel I can use the word man-meat here because, well, that was definitely the main function the male population served in this video. Now Lopez is talking objectification — male and female — and it's pretty great. In a recent interview Lopez was asked if her "I Luh Ya Papi'"s music video functioned more as a commentary on hip hop cliches — a la "Royals," but from somebody with more connection to that part of the industry — or a commentary on objectification:

It’s a little bit of both. We’re doing it in a fun way, but you can’t help [create] a commentary. We have been watching women be objectified for years in not just rap videos but in rock ‘n roll videos, in every kind of video. It was a lot of fun to turn the tables and think about what the shots are that directors do every single time when there’s a girl in a video in a bathing suit [laughs]. It was meant to be a funny, tongue-in-cheek version of those kind of videos, but still beautiful. The song is called “I Luh Ya Papi,” so it only made sense to have a bunch of good-looking papis in the video.

And a very illuminating anecdote:

I think it was time for men to see what it was like. And this video, on the set as well, made people a little uncomfortable. It was funny to see that. Even though the treatment was the director’s idea, when we were doing the scene where they wash the cars, right? You’ve seen this scene a million times with girls. They’re in a bathing suit, they’re pouring water on themselves — you’ve seen it in movies even. You’ve seen it everywhere. They’re pouring water and suds all over themselves, they’re rubbing their boobs on the car, the whole thing. When we were doing this with the guys, the crew, the director — and he’ll admit this too — and the guys who had to do it after one take were like, “Well I think that’s enough. I think, you know, that’s cool.” I was like, “No!” Because if a girl were doing this right now, we’d be shooting it for an hour! Meanwhile we’ve done one take and you’re like, “That’s good.” I was like, “No, it’s not good! Rub your butt on the car!” It’s supposed to be funny, people have to get the joke, but they also have to see what it’s like. How absurd it is to do things like that. I asked the guys, “You feel absurd right now? Yes? Good, then we’re doing it right. Now rub your chest on the car and let’s go.”

What she's saying about the male creative's reaction to the objectification? It's kind of reminding us of something Olivia Wilde said not too long ago about her male peer's reactions to reading women's parts in films:

All the women played men; all the men played women. And it was so fascinating to be a part of this because, as the women took on these central roles — they had all the good lines, they had all the good laughs, all the great moments — the men who joined us to sit on stage started squirming rather uncomfortably and got really bored because they weren’t used to being the supporting cast.

It just goes to show you, sometimes the deceptively simple task of turning the tables can be enough to really drive the issue home.

You can read Lopez' full interview, full of lots of other great stuff, over at ONTD.

More like this
Adele’s All-Female Lineup Includes Kacey Musgraves, Mahalia, & Self Esteem
By Shahed Ezaydi
J.Lo Uses They/Them Pronouns To Introduce Her Child Emme For A Special Duet
By Jake Viswanath
Jennifer Lopez's Diamond Mani Shows Off *All* The Rocks That She's Got
By Audrey Noble
Daryl McCormack On His Unusual First Audition With Emma Thompson
By Olivia-Anne Cleary
Get Even More From Bustle — Sign Up For The Newsletter