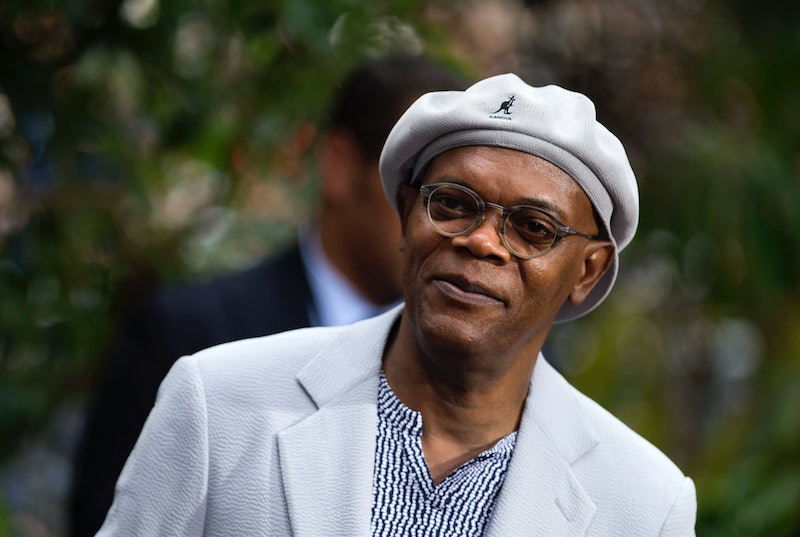 There are few actors — if any — out there who can hold a candle to Samuel L. Jackson when it comes to playing bad. The legendary performer has taken on every type of role under the sun over the course of his career, but to millions of fans, it's his time spent playing the bad guy in movies like Pulp Fiction, Jackie Brown, and Unbreakable (just to name a few) that stand out the most. And now, Jackson is returning to form with Miss Peregrine's Home for Peculiar Children , in which he plays the villainous Barron, a supernatural creature set on taking out the children of the movie's title. Clearly, the actor can't get enough of going evil on-screen — and while promoting Miss Peregrine's in New York, he tells Bustle why exactly that is.

"I think that there’s this interesting thing about bad guys — we all know that once you know he’s the bad guy, he’s gonna do something bad, so my greatest job, most times, is humanizing him in such a way that you can see why he’s doing something, or what his motivations truly are, what motivated him in the beginning to become that person," says Jackson. "It's to give him something that allows you, as an audience member to relate to, so you can take the journey with him. Or you can take the journey against him, but you need to take a side."

Viewers of Miss Peregrine's (in theaters now) will likely not find Jackson's Barron relatable, considering he's an immortal creature who can (spoiler alert) change appearances whenever he pleases, but they will find him compelling. Thanks to the actor's immensely entertaining portrayal, it's impossible to look away when Barron's on-screen or, for that matter, see him as a total villain — he just seems like he's having way too much fun.

"He tries very hard to distract people by being as humorous or wry in the way he speaks to people as he possibly can, to be off-putting," Jackson explains of his character, whom he collaborated with director Tim Burton to create. "He’s like, 'yeah, I know I look scary, but I’m not really that guy until the monster comes out.'"

Although Jackson calls himself a "voracious reader," he wasn't familiar with the Ransom Riggs novel that inspired Miss Peregrine's until after he'd agreed to be in the film. Yet the moment he saw a preliminary photo of what Burton planned for Barron to look like, he was "totally sold," he says — and even more so when he got a sense of the full fantasy world that Burton was creating for the film.

"I like worlds that are outside this one," Jackson explains. "I think that’s one of the purposes of movies, to take you on journeys that you don’t normally go on, to take you to places that are fanciful and free and very different from where we live, to imagine what it would be like to be inside that world and to live a life... it’s the great escape."

Jackson is no stranger to the sci-fi/fantasy genres, of course, having starred in numerous movies throughout his career that've fallen into those categories, from Jumper to the films of the Avengers series. Each one has come with its own unique perks, from the Star Wars trilogy making him a lightsaber-wielding Jedi to Kingsman: The Secret Service giving him the "chance to be a Bond villain without being in a Bond movie," Jackson says. But it's his work in the not-exactly-fantasy-but-still-totally-surreal Pulp Fiction that resonates the most, both with fans and the actor himself.

"Pulp Fiction was the movie that's the gift that keeps on giving," he says. "There are five million kids who come of age every year and see it for the first time, and they discover it’s the coolest movie on the planet all over again."

Well, perhaps not the kids who starred in Miss Peregrine's, who, Jackson says with a laugh, "didn't even care" that he was cast in their film. "When they first saw me, they just laughed," he recalls, grinning. But soon, he says, they all stopped what they were doing, "turned their cameras on, started running over and taking pictures and playing with me like I was a new puppy." Not exactly what you'd expect for the king of on-screen bad guys, but as fans all know, Jackson has never been one to stick to convention.