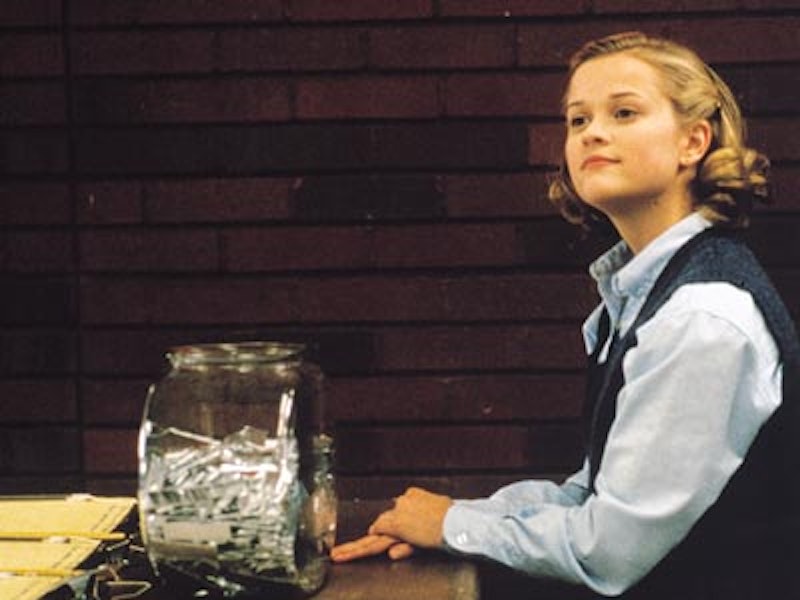 At this point, it's common knowledge that '90s kids tend to look at the decade in which we came of age with rose-colored glasses. When everything is viewed through the lens of nostalgia, it all looks pretty darn good, am I right? Then there are those things '90s kids who were perfectionists will understand and remember about growing up during such a dynamic time. Sure, it meant we had no shortage of entertainment in our lives or trends and fads to follow, but it also meant there were that many more things we had to focus our energy on getting just right — and that many more things to mess up our tidy sense of world order.

Think about it: So many of the fads of the '90s were kind of built upon the appeal of chaos. Hypercolor t-shirts, Jenga, Gak. It was like there was a '90s think tank somewhere saying, "Hmm, what types of things can we make go viral that will really make perfectionists' heads spin?" It's not that we didn't also enjoy these things (and we're just as guilty as the next '90s kids of waxing nostalgic about them); it's just that they challenged our need for everything to be copacetic.

If you're thinking, "What is this chick even talking about?!" Well, you probably weren't and/or aren't a perfectionist. But if you happen to be a '90s kid who is a perfectionist, the following things will make total sense to you.

1. The Brain Pain of Pogs

Everyone's all worried about how they can most effectually create utter chaos by slamming the pog stack, and you're just trying to resist the urge to restack the circles into an exquisitely aligned pog tower.

The girls who just haphazardly placed butterfly clips all over their head? No ma'am, that simply wouldn't do for you. You had to ensure every single butterfly was evenly spaced on your head. Not that you ever used a ruler to make sure or anything. I mean, that would just be ludicrous.... erm, moving on.

3. The Horror of Getting a Non-Rewound VHS Tape

How someone could sleep at night knowing they dropped a video in the Blockbuster bin without rewinding it is beyond me. You know who you are, non-rewinders.

How exciting was it when they upgraded floppy disks from boring black and gray to colors? This meant you could color code them according to subject.

Come to think of it, what didn't you color code in the '90s? From milky pens to Five Star Notebooks, everything was beautifully organized according to color family.

6. That Moment When Someone Ripped the Tag Off a Beanie Baby

For shame, I know. Not only did this destroy the meticulous nature of your collection, but you just knew it was going to cost you millions in the future when the collectors came a-calling.

Some people simply plunged the cookie into the icing with wild abandon, leading to a shortage of icing for the last few cookies in the package. Those people were clearly evil. Perfectionists knew how to ration the icing just right so every cookie got the coverage it deserved.

8. Folding a Note Into an Origami-Like Work of Art

You didn't just create notes; you created miniature works of arts. Your corners were sharp and your creases were strong, because that's how you rolled, my friend.

9. Never Taking Barbies Out of the Box

Again, how else were you going to keep them in pristine condition and, you know, become a millionaire off of them if you didn't preserve them in all their boxed Barbie glory?

10. Waiting for College Acceptance Letters to Come in the Mail

11. How You Really Felt About Friends Who Bailed on Homework

While you didn't necessarily judge your friends who skipped out on homework assignments in favor of crash-reading Cliff's Notes and copying passages from Encarta CDs, you may or may not have felt righteous indignation over their actions.

12. Being the Best Gosh-Darn Tamagotchi Mom Ever

You couldn't go down in history as another '90s kid who let their digital pet poop itself to death or starve waiting for you to get out of class. Perfectionist that you were, your Tamagotchi would probably still be alive today if your mom hadn't eventually thrown it out.

13. Trying to Write Your Name in Microsoft Paint

And then forcing yourself to walk away after realizing that trying to create calligraphy-like letters in Paint was fresh hell.

You spent hours building what you were quite certain were the most amazing amusement park rides ever known to man. As a matter of fact, you're still sure. You were that good.

15. Restacking the Jenga Blocks So They Were Totally Even

With every single block pulled, you lost a little piece of your perfectionist soul. Happily, though, you got to rebuild it each round — making sure, naturally, that every single block was inserted so as to make a flawless rectangular tower.