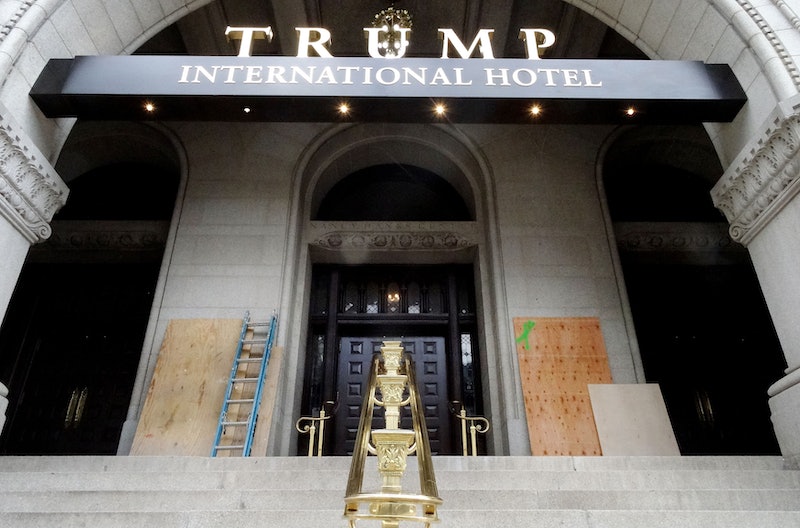 On Sunday evening, the phrases "Black Lives Matter" and "No Justice, No Peace" were spray-painted on Donald Trump's new International Hotel in Washington, D.C. The presence of such a visual protest against Trump in the nation's capital is unsurprising to many, considering his historic marginalization of African Americans — both throughout the duration of his campaign and his years as a businessman.

Trump's negative attitude towards the Black Lives Matter movement is evident in both his rhetoric and actions. During an interview in September with Fox News, Trump was highly critical of the movement:

I think they're trouble, I think they're looking for trouble. ... I looked at a couple people that were interviewed from the group. I saw them with hate coming down the street last week talking about cops and police and what should be done to 'em [and] that was not good. And I think it's a disgrace that they’re getting away with it. ... It's "all lives matter" and that should be the theme of this country ... give me a break.

Similarly, back in February, Trump also told Black Lives Matter protesters present at one of his campaign rallies that "All Lives Matter," which sparked repeated chanting of the phrase among the gathered crowd.

Following a different rally in November, Trump indirectly condoned the physical beating of a Black Lives Matter protester whom his supporters had physically attacked at rally. In an interview following the incident, Trump said, "Maybe [the protester] should have been roughed up. It was absolutely disgusting what he was doing."

Furthermore, in a particularly jarring campaign speech in August, Trump, imploring African Americans to vote for him, stated, "You're living in poverty, your schools are no good, you have no jobs, 58 percent of your youth is unemployed — what the hell do you have to lose?"

In addition to using inflammatory and erroneous rhetoric to describe the African American community, Trump has also failed to use his rhetoric to denounce racist organizations and individuals campaigning on his behalf. Back in February during an interview on CNN, Trump initially refused to denounce the support of David Duke, a former Ku Klux Klan leader. Finally, Trump disavowed Duke in March on MSNBC's Morning Joe.

If Trump's actions and rhetoric during the Presidential campaign have provided enough evidence of his vitriol towards the black community, his past actions as a businessman further solidify this notion. The Trump Real Estate Corporation, of which Donald Trump served as President, has been sued twice by the United States Department of Justice for actively trying to prevent black tenets from renting apartments in New York. The Trumps denied the claims and attempted to sue federal government for $100 million, but eventually settled. "In the end the government couldn't prove its case, and we ended up making a minor settlement without admitting any guilt," he explained in his autobiography.

It would be no surprise if the African American community and the Black Lives Matter movement feel put out and left behind by Trump (indeed, at one point in August his popularity among African Americans was polling at zero percent). The "Black Lives Matter" phrase currently painted at the entrance to his hotel is a poignant reflection of this sentiment.