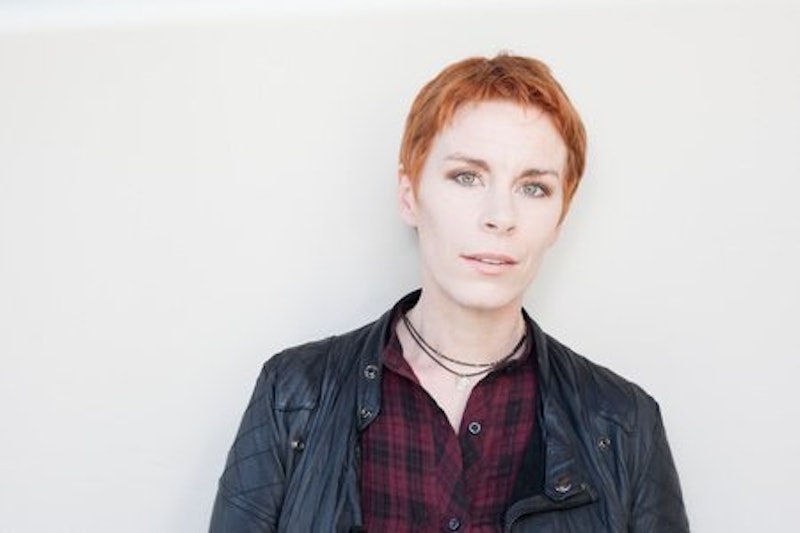 Just in time for Halloween reading season, Tana French's latest Dublin Murder Squad book — filled with the same murder, mystery, and psychological terror that made the first five books in the series so addicting — hits shelves Oct. 4. The sixth installment in the popular crime series, The Trespasser is one fall page-turner that you won't want to miss.

When Detective Antoinette Conway and her partner Stephen Moran get passed a case that seems to be a routine lover's quarrel, neither of them are too thrilled to have another boring, low-key crime to solve while other members of their squad get to handle the real murders. It doesn't take long, however, for Antoinette to realize this case isn't exactly what it seems: someone inside their department is pushing to close it up quickly and quietly. She must race against time to figure out if there really is something stranger and more sinister going on with this murder investigation — or if it's just her own fear and paranoia clouding her judgement. When your entire squad is against you the way the Dublin Murder Squad is against Antoinette, it can be almost impossible to tell.

"Antoinette doesn't play well with others, and there's some kind of campaign aimed at getting her to quit because a lot of the guys do not like her one little bit," she says. A younger member of the squad, and a woman, Antoinette has had a target on her back since her first day reporting to duty. But when I asked about the sexism Antoinette and the other female detectives of the Dublin Murder Squad face on the job throughout the series, French explains that there's something even bigger at play than just gender bias.

"I don't know that what Antionette is facing is so much sexism as kind of the ultimate result of a system based entirely on power," French says. "I think, for detectives, one of their main currencies is the ability to make other people do exactly what they want them to, whether it's good for them or not, like make a reluctant witness talk or make a suspect confess [...] I think that kind of focus on power, it would be very easy for that to turn sour. Guys, girls, whoever."

"I don't know that what Antionette is facing is so much sexism as kind of the ultimate result of a system based entirely on power."

As any reader of French's series knows, none of the detectives on the Dublin Murder Squad have it particularly easy — male or female. Each book features a new narrator within the same world, each of them struggling not only with their own cases, but with their own personal demons, too. The idea of creating a series with shifting perspectives in each book was one French just "fell into." "It just happened," French says. "I didn't have a plan. I'm not one of these writers who sit down and know what they're doing [...] I start off with a character, a basic premise, and a core location, and I just dive in and hope there's a book in there, and I'll find it along the way."

"She's so tough, she really, probably genuinely, does not give one single damn what other people want from her."

In The Trespasser, French gives Antoinette, the unwilling partner in a previous book, a turn at the helm. "About halfway through The Secret Place , I was thinking, 'she's fun to write,'" the author says. "She's so tough, she really, probably genuinely, does not give one single damn what other people want from her. Me, like most people, I'm trying to balance my own needs with the outside world's demands, trying to keep everything in harmony and find that balance, and she's not. She has no time for any of that."

"Me, like most people, I'm trying to balance my own needs with the outside world's demands, trying to keep everything in harmony and find that balance, and she's not."

It's this particular quality about Antoinette that makes her not only a fascinating character to read about, but the perfect narrator to write about, according to French. "I like writing books that are about the huge turning points in the character's life," she says, "the moment where whatever this character decides, his or her life is never going to be the same again." As for the leading lady of The Trespasser, "She's got a very firm narrative about what her life is like," French says, "what her place is in it, what her story is, and over the course of the book, she starts to realize that narrative isn't necessarily in tune with the reality."

That line, the one between a perceived reality and an actual reality, is one of the things that keeps French writing book after book within the same world, but through the eyes of different narrators. "One of the things that interests me is how different perspectives can switch what seems to be the reality," she says of her writing inspiration. "I think that's what's interesting to read about is when there is friction between what is inside the character's head, what the characters believe about himself or herself, and what's going on outside, what other people are doing and seeing."

As for the unfinished seventh installment of the Dublin Murder Squad, you can expect more of what you love — bone chilling mystery, a complicated character at a dangerous turning point in his life — but he won't be the same type of narrator that you're used to. "The narrator next time isn't a detective and hasn't shown up in any of the other books," French says. "He's just a normal, nice guy, who at a lowest point in his life finds himself mixed up in a murder investigation, and has to figure out not just what to do about it, but what his place in all this really is [...] There is a murder in there, because I don't know how to write a book without throwing a dead body in there."

Because at their very core, French's beautifully written, character and plot driven books are, after all, mysteries, the kinds of books that keep you turning page after page. And that's because mysteries, according to French, are addicting to all of us. "I think human beings just like mysteries," she says. "I think it's one of the things that make us human. People read and write mysteries as a way of dealing with things that they're having a really hard time getting a handle on."

"I think human beings just like mysteries,' she says. I think it's one of the things that make us human. People read and write mysteries as a way of dealing with things that they're having a really hard time getting a handle on."

Try and get a handle on it yourself with The Tresspasser, available Oct. 4 from Viking.