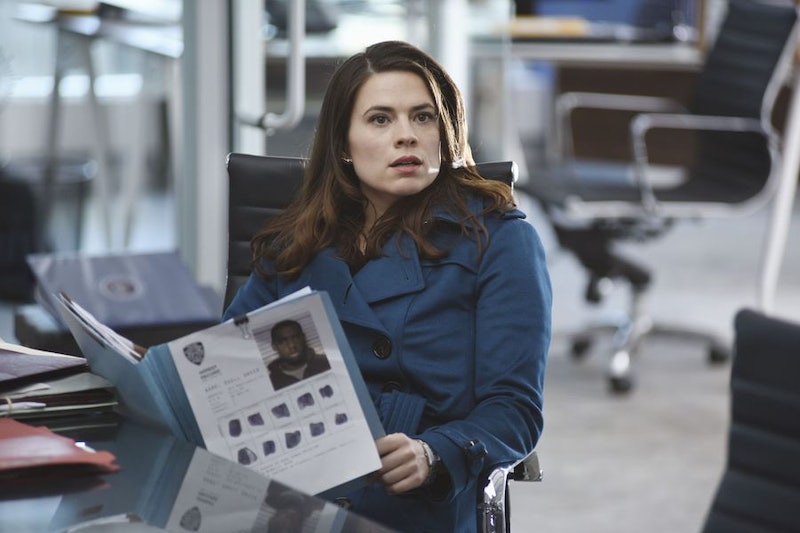 It seems like every new TV show these days is based on something, whether it be a book, a film, a true story, or even another TV show. This fall season alone, television audiences can tune into small screen adaptations like The Exorcist, Frequency, Lethal Weapon, MacGyver, Notorious, and more. But what about the new ABC series headlined by former Agent Carter star Hayley Atwell? What was it inspired by? In fact, Conviction is based on a true story — just not in the way you might think.

According to the show's official website, Conviction is about "lawyer and former First Daughter Hayes Morrison," who is "about to accept a job offered from her sexy nemesis, NY District Attorney Wayne Wallis, to avoid jail time for cocaine possession and avoid hurting her mother's Senate campaign." This new job involves Hayes "working with his team at the new Conviction Integrity Unit," where she will use "her brilliant mind to turn over cases where there is credible suspicion of wrongful conviction."

So which part of this is based on a true story? Obviously, the idea of a former First Daughter working a high-powered job while her mother runs for political office is more than a little reminiscent of Chelsea Clinton. But as far as I'm aware, neither Chelsea Clinton — nor any other First Daughter, for that matter — has been the victim of blackmail. (Or if they were it was kept very quiet.) It's not the specifics of the protagonist's circumstances that find their inspiration in real life, but rather the job that she begrudgingly takes.

While the "Conviction Integrity Unit" may sound like the most made-up-for-television sounding name ever conceived (it would be right at home next to 24's Counter Terrorist Unit), and you might assume that it's a riff on the infamous Innocence Project… you'd be wrong on both counts. In fact, conviction integrity units are a very real thing, and they're doing very good work.

According to a Huffington Post article published on the very subject in February of this year, conviction integrity units are pretty new, but quickly evolving focus of the criminal justice system. According to the Huffington Post, their goal is "to identify and correct false convictions — convictions often secured through malfeasance, intentional or otherwise, by prosecutors or police; flaws in an investigation; or unreliable forensic science."

According to HuffPo's report, in 2002, the first CIU began in Santa Clara County, California. Today, they are still a relatively rare phenomenon — there are only 24 in the entire country, compared to 2,300 prosecutor offices — but the number of CIUs has doubled in the past two years, which makes a big difference, according to what the Huffington Post reported.

The increased presence of CIUs coincides with recent record-high numbers of exonerations. In 2015, almost 150 people were cleared for crimes they never committed, more than any other year in history, according to the National Registry’s report. CIUs were responsible for 58 of those cases last year, also a record.

But even though Conviction is inspired by these real-life units, don't expect the soapy drama to be a paragon of verisimilitude. While ABC's version of a CIU will likely see Hayes and her team tackling a new case every single week, real CIUs can take years to effect a single exoneration and also spend time focusing on reforming practices to stop wrongful convictions in the first place, according to HuffPo.

Meanwhile, ABC will likely speed up the process and focus on the more dramatic sides of the business to keep viewers on the edge of their seats. See Hayley Atwell and her fictional CIU at work when Conviction premieres this Monday night at 10:00 p.m. ET on ABC.