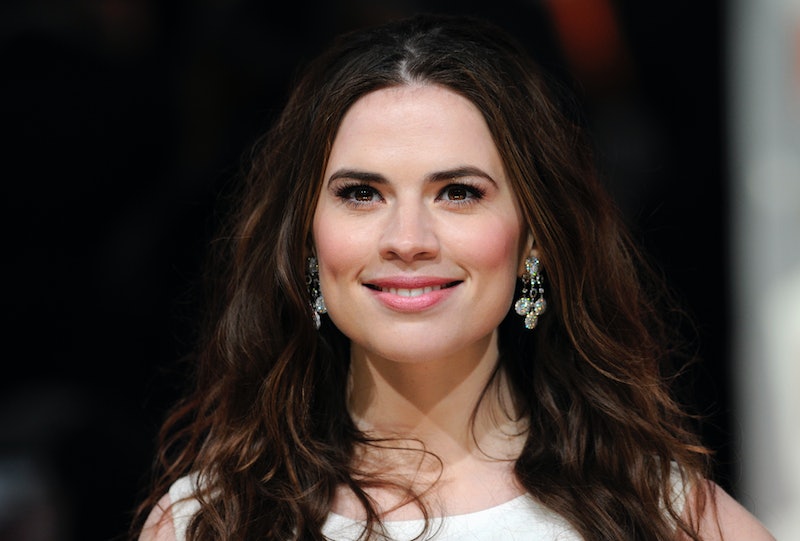 !hen ABC tragically cancelled Marvel's Agent Carter just earlier this year after just two terrific seasons, the network made it up to Hayley Atwell by picking up the actress' next television project: the sudsy crime procedural Conviction. That's all well and good, and I'm obviously very happy for Atwell… but now someone needs to make it up to the fans of the character by continuing Peggy Carter's story in some fashion. Fortunately, the show's star herself seems to be on board with this idea, since apparently — as she recently told CBR.com — Hayley Atwell wants an Agent Carter movie.

"I don't feel like I've said goodbye to her," the actress said about her character. "She does still seem to live on a lot for the fans. And Marvel is still such a big part of my career, especially my professional family, that I would absolutely not rule out the idea of going back to Peggy at some point, seeing her in other avenues. I love her, and I hope that she has a life elsewhere at another time." Not only does she hope that Agent Carter has a life elsewhere, Atwell has actively been championing the idea. "I hound [Marvel Studios co-president Louis] D’Esposito on a regular basis, saying, 'Give me a movie!'"

Are you listening, studio execs? Fans of the Marvel Cinematic Universe have been clamoring for a franchise centered on a female character for years. Although our first female hero will finally be getting a solo film in 2019's Captain Marvel, the small screen branch of the MCU beat that movie to the punch by several years with not only ABC's Agent Carter, but also Netflix's Jessica Jones . While fans have been arguing over which female superhero should be the next to get her own feature film franchise after Captain Marvel — with Black Widow, Scarlet Witch, and Squirrel Girl among the popular candidates — perhaps we've been overlooking the most obvious choice of all: Peggy Carter herself.

After all, the character was first introduced on the big screen, in 2011's Captain America: The First Avenger, before receiving her television spinoff. Atwell reprised the role (from beneath some serious old-age makeup) in the 2014 sequel The Winter Soldier; and Peggy's death resonated throughout this summer's Civil War . So she's already a character that audiences are familiar with, and one who has so much story left to tell — story that's integral to the fabric of the MCU.

Peggy's history between the events of The First Avenger and The Winter Soldier has been touched upon throughout the films, but some viewers may have forgotten that the former SSR agent literally founded the Strategic Homeland Intervention, Enforcement and Logistics Division (aka S.H.I.E.L.D.) alongside Tony Stark's father, Howard. It was assumed that ABC's Agent Carter would eventually lead up to this momentous occasion… but the network cancelled the show before S.H.I.E.L.D. was even a glimmer in Peggy's eye.

Nobody knows what's coming after the untitled fourth Avengers movie brings Phase 3 of the MCU to a close. Whatever happens, the studio will need a way to reboot the franchise and launch it into a new chapter; and what better way to kickstart Phase 4 than by going back to basics and giving audiences a glimpse at an untold chapter in Marvel history? Imagine a feature film starring Atwell as Peggy and Preacher's Dominic Cooper reprising his role as Howard Stark as the pair establish S.H.I.E.L.D. while battling the forces of evil alongside such Golden Age heroes as the Sub-Mariner, the Human Torch, and Union Jack — heroes who otherwise might never get their own movies. It practically writes itself!

The only problem is, we might have to wait a while to see this dream come to fruition. Even if an Agent Carter movie is the first project Marvel Studios tackles after Avengers 4, it would still be 2020 by the time it finally rolled around. But we can be patient. "The great thing about Peggy is, we know from Winter Soldier that she lives a long life, so she can come back," Atwell told CBR. "I'm banking on, when I'm in my fifties, I'm like, 'This is the time. Let's see what Peggy's up to in this decade.'"

Well, hopefully we won't have to wait quite that long.