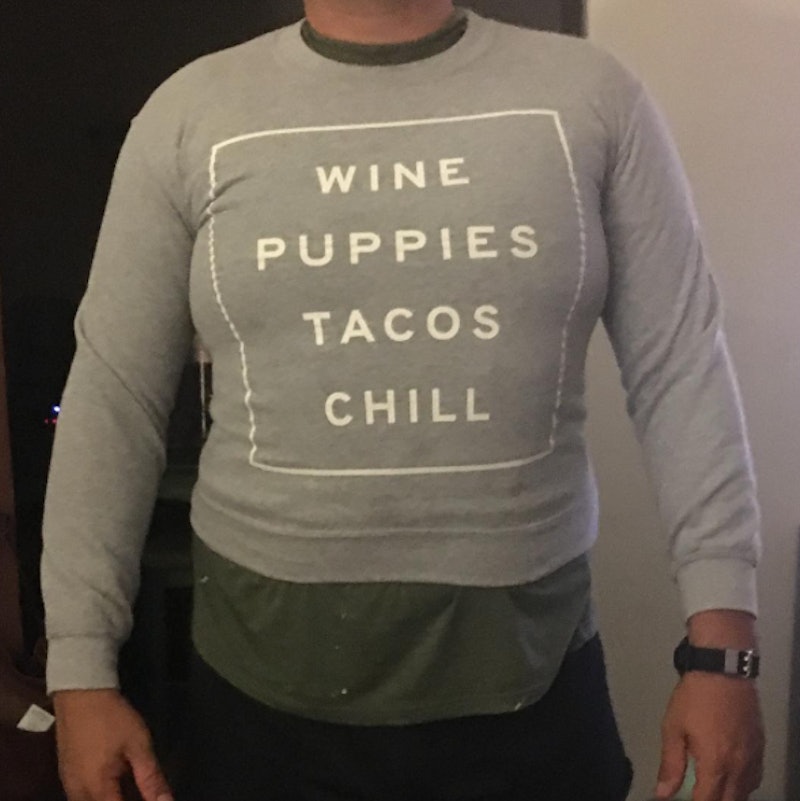 Back when I was in school, if a girl was wearing a loose and comfortable-looking sweatshirt, you knew she stole it from her boyfriend — I know this, because 98 percent of my teenage sweatshirt collection was comprised of stolen goods from past lovers. And now, as a better-late-than-never social media trend, guys are stealing their girlfriend's hoodies and posting pictures of themselves wearing them online, with the hashtag #TakeHerHoodie. Because, #karma.

This growing trend is totally fair and truly funny, but in our defense, there's really just nothing like a boy's sweatshirt. We don't steal them because we're minor league criminals, we steal them because we're really passionate about them. First of all, and especially in this foray into fall, a big cozy sweatshirt is like a constant and much needed hug. Men's sweatshirts tend to be larger, more dense and athletic — as they're less concerned about how it looks and more concerned about how it works. Second, there's something really emotionally comforting and romantic about wearing your lover's clothes. They smell like them, they remind you of them. So yes, a lot of the time, we're stealing our boyfriend's hoodies because they're just softer and warmer. But we're also stealing them to make us feel close to them. Alas, the movement is in full swing and these are some of my favorite participants:

No wonder we steal our boyfriend's sweatshirts. There's nothing warm or comfortable about this thin fabric and cold metal hardware! This is just a t-shirt with a hood sewn into it.

No, this is not a sweatshirt. It's a shiver shirt. Maybe if someone would make women's sweatshirts that actually had coverage and style, we'd wear our own clothes! I mean probably not, but the temptation to steal would be less!

Fashion over function, you know what I mean? Give us the soft stuff! This looks like the kind of sweater an English, adult teddy bear might wear for tea.

Nothing says cozy like an exposed abdomen. This top is literally a contradiction. What season is this for?!

So TBH, I think boyfriend's who have been robbed of their sweatshirt collection should actually feel really honored and loved. If someone wanted to borrow my clothes to feel close to me, I think my heart would swell and explode. So, sorry, but I'm not sorry for all the sweatshirts that I've stolen. In fact, I just realized that the one I'm wearing right now is from an ex-boyfriend, and I stole it so long ago, I tricked myself into believing it was mine to begin with.