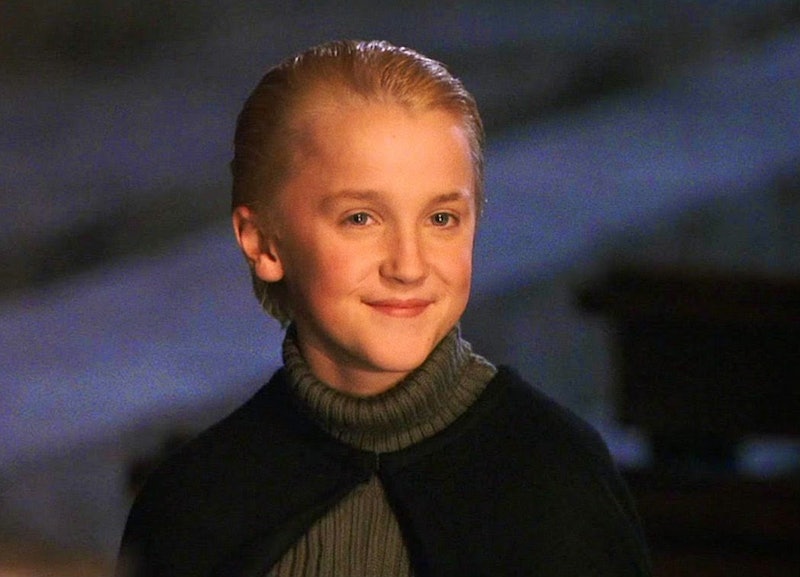 I know, I know — Draco Malfoy is a straight-up terrible dude who does not deserve our love or attention, and telling Harry Potter fans to celebrate the Draconid Meteor Shower in Draco's honor isn't exactly the best way to hold fierce to that belief. But if we're accepting Harry Potter and the Cursed Child as canon, then Draco's a halfway-decent guy now! He respects Queen Hermione! He's a good dad to Literal Cinnamon Roll We All Want To Kidnap, aka Scorpius Malfoy! We can maybe kind of sort of cut him some slack for getting dragged into all that "low key trying to kill Dumbledore" nonsense as a kid.

And what better way to cut that slack than by celebrating the meteor shower radiating from the very constellation for which our angst baby misunderstood villain was named? Starting Oct. 7, the Draconid Meteor Shower will be visible in the evening sky for the first time since 2011 — and although it will be visible all over the sky to viewers in its range, they radiate from the head of Draco the Dragon, a constellation in the far Northern sky. Consequently, the best places to view this shower are the U.S., Canada, Europe and northern Asia.

Much like Draco Malfoy himself, this particularly astronomical event is prone to some fitful behavior. While it is visible to the naked eye approximately 6.6 years, it will often only display a few visible meteor displays per hour — but some years has been known to produce thousands per hour. ("Wait until my father hears about this!" - the Draconid meteor shower in 1933.) While it's impossible to know what we're going to get this year until the night of, we can plan ahead and use this opportunity to show poor Draco some love — because yeah, he's a git. But he's our git.

Here are some ways to celebrate and/or lightly mock Draco, in honor of his meteor shower this weekend.

Learn The ~History~ Behind Draco's Namesake

FUN FACT: In Greek mythology, Draco the Dragon was slain by the goddess ... Minerva . She finished him off and then threw him up into the sky, where he got all twisted and froze that way when he hit the North Celestial Pole — not only explaining why Draco's constellation is wonky, but why everyone in their right mortal minds should fear the glare and subsequent detentions of one Minerva McGonagall.

Bake A Bunch Of Bread

SCORPIUS LOVES BREAD, everyone. And according to my good friend science, taste is genetic. (OK, OK, it's genetic in the "evolution taught us not to eat bitter things so we wouldn't get poisoned and die" sense more than the literal "WOW I love me some carbs and so will my smol son" sense, but honestly, who doesn't love bread?) In any case, you'll need sustenance for watching the stars on Friday night.

Revel In The Forever Awkwardness Of Draco's Shining Moment

Because the truth is, no matter how many stars seem to streak across the sky on Oct. 7, not one of them will be nearly as remarkable as this GIF — for long after we and the constellation Draco are so much dust, the residual awkwardness from that scene will linger FOREVER.