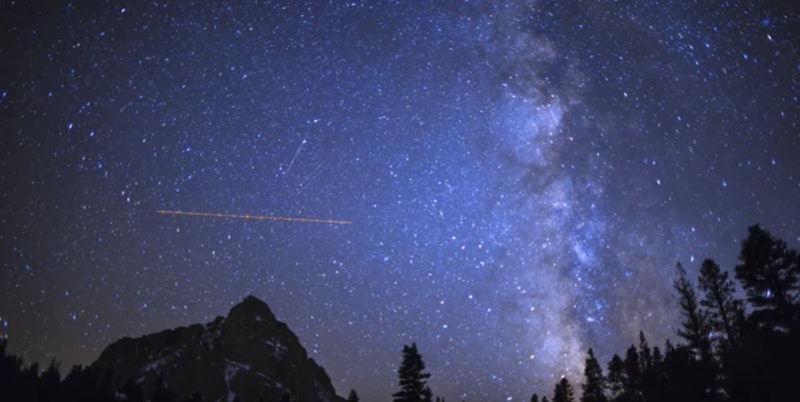 The Draconid meteor shower is created when earth's orbit and the orbital path of Comet 21P/Giacobini-Zinner intersect. The dust and debris from the comet burns up in our planet's upper atmosphere producing the distinctive flashes of light we see from our lawn chairs. Like most annual meteor showers, the "Draconid" meteors get their name from the constellation where the meteors appear to issue from. In this case, those fiery dust particles will fly out of the head of the sweeping northern constellation Draco the Dragon. According to Space, the name "Draco" is derived from the latin term for "huge serpent", and has been traced to several Greek myths, as well as the serpent from the Garden of Eden. Despite being the eighth-largest constellation in our modern sky, its lack of bright stars and large snaking form make it rather difficult to see.

The Draconid meteor shower is unique in that it is also sometimes called "the Giacobinids" after its comet of origin. As EarthSky points out, this name was given "to honor the role this comet played in the history of astronomers’ understanding of what meteors actually are." The comet was first discovered in 1900 by Michel Giacobini in France, and spotted again in 1913 in Germany, resulting in the title 21P Giacobini-Zinner. The comet's return every six years, helped astronomers in the early 1900s cement the theory that meteor showers and comets were related.

Though the Draconids is typically a slow moving shower with only a few comets an hour, under the right conditions, the comet can produce a spectacular show. The October Draconids gained renown between 1933 and 1946 when thousands of meteors stormed through the sky every hour, dazzling onlookers. The celestial event even made the paper, in an article from 1934 called "The Meteors from Giacobini’s Comet."

While 2016's bright waxing crescent moon will not provide optimal viewing conditions, that by no means guarantees a weak performance. The last remarkable Draconid show took place in 2011, with over 600 meteors per hour observed in parts of Europe, despite an annoyingly glaring moon. So here's hoping we will get something equally awesome on Friday night!

To best view the meteor shower, hunker down in a location where you can see an open swath of sky with as little light pollution as possible. Bring a cozy blanket, and look up. If your feet are pointing in a north/northwest direction, you should be facing Draco, his fiery breath about to light up the sky.