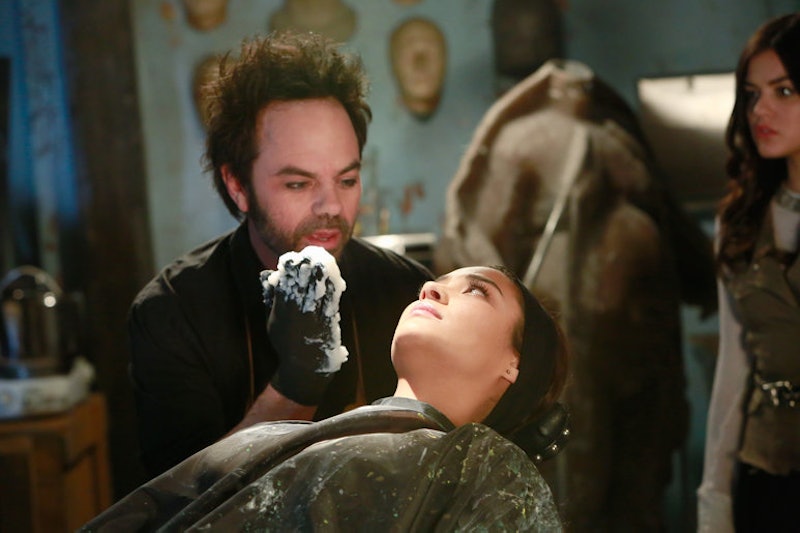 Using a reverse phone directory site that looks like something out of War Games, Spencer tries and fails to track down the mysterious phone number that emerged from last week's fowl play. But the girls do find yet another creepy mask — one that allegedly bears a resemblance to Ali? I'm not really seeing it, you guys — among their dead friend's possessions.

Emily, Hanna and Aria track down the designer, Hector Lime, from a stamp on the back of the mask. Surrounded by chirping bugs and croaking frogs, Lime's waterfront home feels more like the bayou than suburban Pennsylvania. Did I accidentally change the channel to True Blood?

Unsurprisingly, it takes a deeply creepy dude to make such deeply creepy masks. Captain Weirdo comes to a quid pro quo agreement with the Liars. He offers them information about Ali's mask orders in exchange for a mold of Emily's likeness. While Lime's focused on Em, Hanna discovers a mask based on Melissa's face hidden in his workshop. Whaaaaa?

But here's some advice, young people of America. Don't let strange men who are not known to you smear foreign substances around your eyes and mouth.

By the way, how does one break into the creepy mask-making profession? Do you start in un-creepy masks and then branch out? What do you major in? Is there a union? Discuss.

Spencer and Toby sneak into Radley to learn more about the supposed suicide of Mrs. Cavanaugh, who is believed to have leaped to her death. Their visit — and the sight of a roof directly below her former room's window — have them doubting the official story more than ever.

Overall, it's a very mom-heavy episode. Ella Montgomery's probably-younger-than-Mr. Fitz BF invites her to move to Austria with him. (SPENCER: Vienna's a long way to go for some strudel. ARIA: Depends on who the baker is.)

Pam Fields learns that Emily stole from her supply of hydrocodone — why does Mom have dozens of serious pills just lying around, anyway? — and is then accused of physically abusing her daughter when A places an anonymous call to Family Services.

Meanwhile, Ashley Marin would not seem more suspicious if she left the late Detective Wilden's decapitated head on the breakfast table. I laughed out loud when Hanna stolled into the police station to find a bulletin board strewn with photos of Rosewood residents and notes about Ali's murder just sitting there, out in the open. It was like a prop from The Wire, if Avon Barksdale's crew was entirely composed of upper-middle-class white women.

Fashion highlight of the week: I unironically love the French bulldog top that Aria wears in the opening scene.

See you next week, bitches. Xoxo.