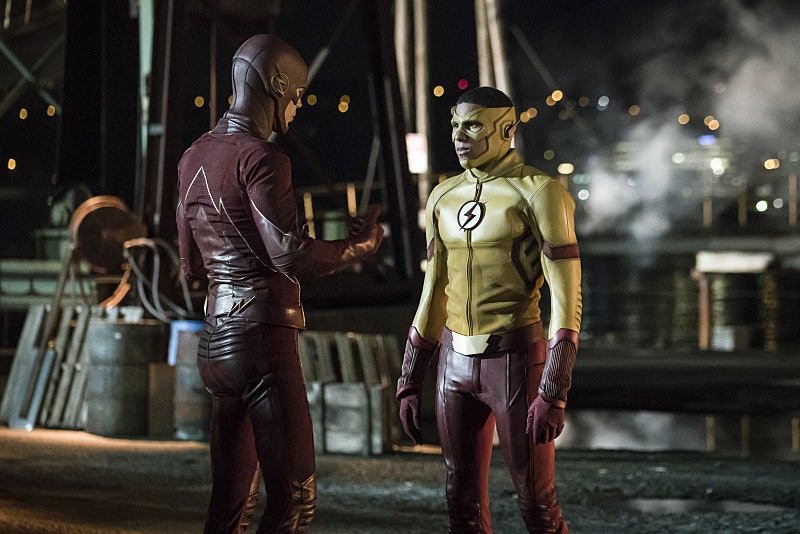 The third season of The Flash will feature some major changes stemming from the time-traveling antics of Season 2. And post-"Flashpoint," fans will be introduced to the Kid Flash, the new speedster secret identity of Wally West. But like many of the most complex parts of The Flash , Kid Flash's DC Comics' backstory should have a big influence on the upcoming season. The character has a rich comic book history and since The Flash hasn't been shy about adapting even the scientific aspects of the comics, I think The CW series will dive into a lot of the character's history, and already it looks like they're being pretty faithful to the source material.

First things first: in the comics, Wally West was indeed the first Kid Flash, though he's possibly better known for when he eventually went on to adopt the (adult) Flash alias when Barry died in the comics during the Crisis on Infinite Earths , which shifted most of the established heroes when many parallel universes were destroyed in a cosmic event. After adopting the adult Flash alias, Wally West effectively replaced Barry Allen and Bart Allen, Barry's descendant from the future. There's already been enough time travel in just a couple seasons of The Flash, though, so I wouldn't worry about Bart replacing Wally just yet. As of right now, let's learn more about what could be in store for the newly empowered Kid Flash.

He Has A Familiar Costume

Wally's costume has already been revealed, and while it does update the classic yellow and red accented costume to fit with the other suits on the show, generally, it looks like Wally's classic comics outfit, which flips Barry's use of red and yellow.

Kid Flash Got His Powers Just Like Full-Grown Flash

And I mean that literally — in the comic books, Kid Flash gets his powers entirely by accident when Barry Allen happens to recreate the same experiment that gave him his powers. Similarly, the source of powers on The Flash remains a combination of electricity and science gone wrong, just like in the comics.

After Wally gets his powers and goes to Barry, he is taken in by the older speedster. The two even traveled through time together to millions of years ago in one comic adventure. Their relationship is not unlike Batman and Robin, with the older, established hero and his young, inexperienced sidekick.

In the series, Barry will certainly have more experience as a superhero than Wally, so he should be able to offer some advice, but Wally is certainly no sidekick.

He's A Founding Member Of The Teen Titans

In the comics, Kid Flash is one of the original Teen Titans, the all-kid crime-fighting group that had their own comic series. Kid Flash was also part of the great Cartoon Network series Young Justice, about another group of young heroes. This suggests that it's possibly Wally could eventually headline his own team, possibly in a spinoff.

He's Related To The Wests

Making Iris and Barry sort-of-siblings in the beginning of Season 1 made their eventual romance from the comics seem a little weird. But after Barry's meddling, Wally, who is Iris' long-lost actual brother in the show, is claiming his place in the canon. In the comics, Wally is Iris' nephew – he's a kid, remember — but the characters have always had a close, familial relationship.

He May Lose His Powers

Kid Flash is pushed into an early retirement by losing his powers when he reaches adulthood and his metabolism begins to recede. Since The Flash has aged up Kid Flash and aged down Barry, it's possible that even within a season or two he could be fighting crime without the aid of super speed. Eventually, scientific breakthroughs gave Wally his powers back.

No matter the comic storyline they use as inspiration, The Flash should put Wally West's Kid Flash to good use.