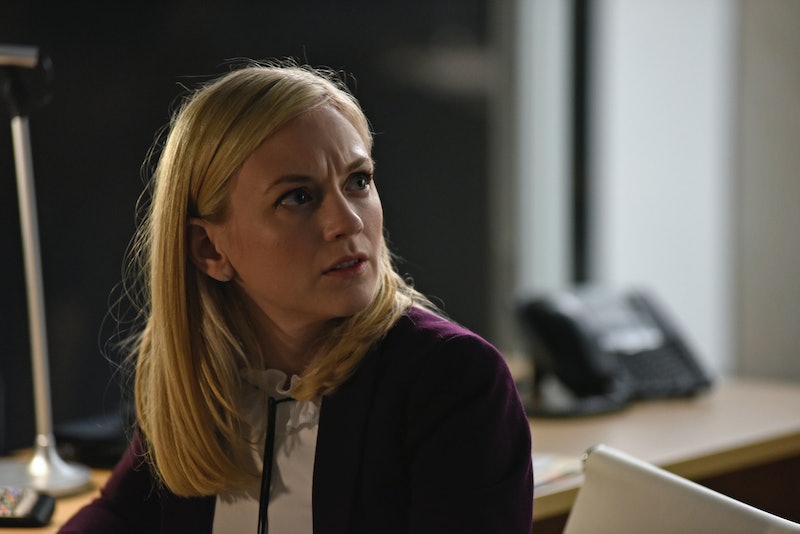 One thing that struck me as I watched ABC's premiere episode of Conviction for the first time was its similarity to the network's other hit procedural, Scandal — it has a do-anything protagonist, and her worker bees all have dark stories and secrets on the side. One of those lawyers is Tess Larson, who seems just like a regular old lawyer when Hayes Morrison becomes her boss. Hayes reads her like a book like an hour into their knowing each other, telling Tess that any exonerations she helps with now won’t help her past. Um, what? Who is Tess Larson and what did she do?

Hayes is the head of the newly founded Conviction Integrity Unit, and Tess is one of the lawyers on the team that will help Hayes figure out if the cases they’re examining should be retried or stand as they are. Tess is clearly on the “let’s exonerate everyone!” side of the aisle, and Hayes’ comments to her and a newspaper clipping reveal (sort of) why — it seems that Tess’ testimony as a child put an innocent man in jail for rape and murder. Conviction goes out of its way to suggest that eyewitness testimony is so unreliable that it should basically be ignored, so Tess is probably looking to right the wrongs of her younger self.

Tess is like Quinn from Scandal — she’s green now, but I bet that she’ll grow into something bolder as the season progresses (and in later seasons, should they happen). Tess is quiet, but, in my experience watching shows like this, it’s the quiet ones that you have to watch out for. There is a lot bubbling under the surface there, and I want to know more about Tess and the situation that Hayes knows about. Also, how does Hayes know everything? She spends a lot of time researching people for a person that doesn’t want to do anything. Hopefully, all will be revealed sometime in first season.