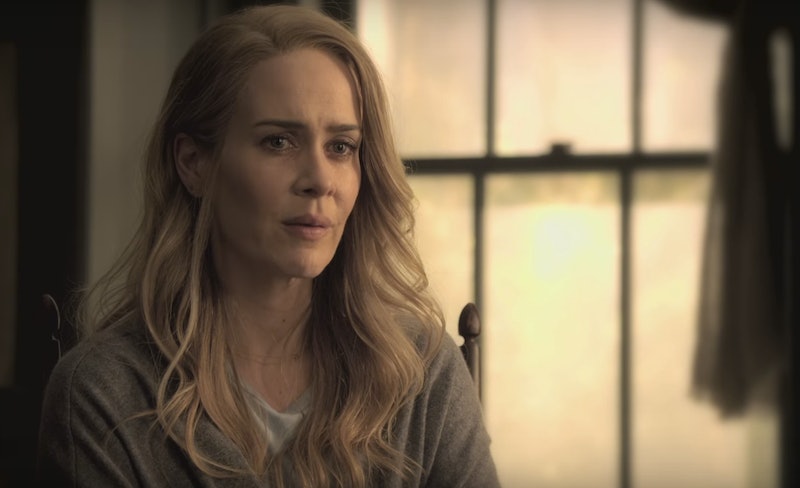 So far, American Horror Story: Roanoke, the sixth season of the series, has broken from the tradition inspired in the last five years in some major ways. Not only has the show adopted a faux-documentary framing device, it's also remarkably subdued compared to some of the previous seasons, and even incorporated some real history into the show. But while some aspects of the season are more inspired by real ghost stories, there have also been lots of moments when AHS: Roanoke definitely wasn't based on a true story. Even when American Horror Story shoots for seriousness, it still manages to have at least a few instances that are totally outsized, ridiculous, and mind-bendingly unrealistic. Of course, it also wouldn't even be AHS if its characters didn't often make choices and have motivations that made no sense.

And, of course, the show wouldn't be scary at all if it didn't embellish the truth, come up with creepy killers, and create shocking, horrifying images that have absolutely no basis in reality. So, what follows in simply a collection of the many, many times so far this season that American Horror Story: Roanoke was clearly playing into the show's tradition of twisting and exaggerating the truth and creating its own sense of reality.

1. When The Creators Of This Documentary Cast The Actors Older Than The Real People

It's so glaring that it almost seems like the "big reveal" Ryan Murphy keeps teasing will reveal some kind of switcheroo that makes the very talented and gorgeous but also clearly middle-aged Sarah Paulson, Cuba Gooding, Jr., and Angela Bassett the "real" people.

2. "Croatoan" Being A Secret Catchphrase

In reality, Croatoan is the name of a Native American tribe that was local to the area where the Roanoke colony was located. Whether the message carved into the tree was some form of graffiti or designated as a message for those who found the abandoned colony (perhaps the white colonists were taken in by the Native American tribe or moved to the nearby Croatoan Island), it certainly wasn't as mysterious as AHS would have it seem, and a group of North Carolina natives should recognize the name, not be baffled by it.

According to Zillow, a mansion farmhouse in Roanoke, NC, would cost more like a hundred thousand. Granted, the foreclosed Murder House — excuse me, Roanoke Murder House had a bunch of murders take place in it, but perhaps if the Millers had paid more, it would be more understandable why they refuse to leave.

4. Wild Pigs In The Woods

According to the North Carolina Wildlife Resources Commission, wild boar were introduced to the area in the early 1900s, making all of the domesticated pigs being disturbingly savaged in the contemporary storyline plausible, but the wild beasts running around in the 1600s a little less so.

Granted, this storyline supposedly took place years before Shelby and Matt moved into the house, but according to the North Carolina Division of Health Service Regulation, one person dying in an assisted living or nursing home is enough to prompt an inspection, investigation, and possible fines or even criminal prosecution! And since these nurses literally shot patients in the head, I don't think they were covering their tracks well enough to fool anyone.

Thomasyn White, the character played by Kathy Bates, was the real wife of John White, Roanoke Colony's governor. However, the couple only had one son, Tom, who died as a child, so Ambrose, Wes Bentley's traitorous son, is completely fictionalized.

7. When Lee Got Fired For Being A Bad Cop

As real events have shown, it's mighty hard to lose your job as a cop, regardless of how badly you do it, including being addicted to drugs. It's a cynical read on the story, but it's certainly a glaringly fictional detail.

8. Everyone Who Doesn't Have Kathy Bates' Bonkers Accent

Half English, half Irish, a little bit of Baltimore... according to an NPR report from 2012, Bates' performance is somewhat close to the Elizabethan English accent. That means, weirdly, the Roanoke settlers, who were middle class Englishmen and women of the mid-to-late 1500s, should have sounded more like Bates' performance.

9. And Kathy Bates Being On The Show In General

Thomasyn may have been a real woman, but she wasn't on the roster of colonists who traveled to Roanoke at all (though it's not totally clear what she was doing instead). So her becoming governor is an enticing piece of fiction.

Before the ill-fated 1587 Roanoke Lost Colony, there was a 1584 English journey to the territory, so, conceivably there could have been a white woman running around on Roanoke Island who wasn't a member of Thomasyn's colony. But, uh, there's no historical record of some kind of vaguely pagan boogeyman skulking around in the North Carolina woods.

While Priscilla has been pretty cool so far, letting Flora stay with her without being killed and all, there were no female children in Roanoke besides John White's infant granddaughter, the first English child to be born in America.

Thank goodness: Not even the scariest corners of the Internet swear that this is a thing that's ever happened before. So rest easy — AHS: Roanoke's creepiest moment so far is, in fact, fiction.